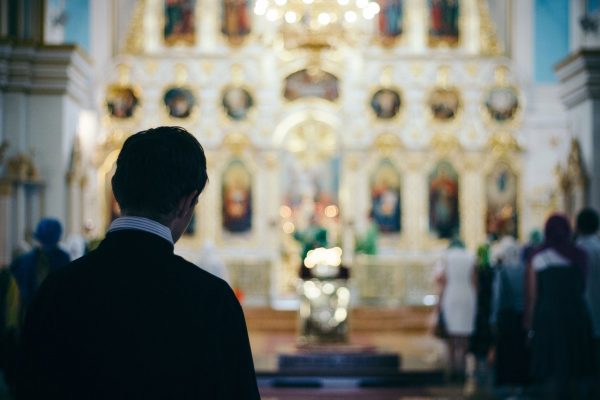 In the Old Testament we read about an encounter between the Prophet Elijah, a widow and her son, who lived in the small Phoenician town of Zarephath near Sidon (1 Kings 17:8-24). While the prophet was staying with them, the widow’s son became ill and died. Through the intercessions of the Prophet Elijah, Yahweh raises the child from the dead. In the Old Testament, God is presented as the protector of the widows, orphans and strangers, for “He executes justice for the fatherless and the widow, and loves the sojourner, giving him food and clothing” (Deuteronomy 10:18). The restoring to life of the widow’s son by Jesus in today’s Gospel (Luke 7:11-16) parallels the miracle performed by the Prophet Elijah. At the beginning of Jesus’ ministry, on a sabbath day, He enters a synagogue in Nazareth (Luke 4:16) and reads from Holy Scripture a selection from the Book of Isaiah : “The Spirit of the Lord is upon me, because he has anointed me to preach good news to the poor. He has sent me to proclaim release to the captives and recovering of sight to the blind, to set at liberty those that are oppressed, to proclaim the acceptable year of the Lord” (Isaiah 61:1-2). He then proclaims to everyone in the synagogue, “Today this Scripture has been fulfilled in your hearing.” The people are astonished, because what Jesus read was the prophecy which describes the inauguration of the messianic age. Furthermore, Jesus makes the bold claim by stating, in so many words, that He, Jesus of Nazareth, the son of Joseph the carpenter, is the Messiah.

The singular divine feature of the messiah, as described by Isaiah and as characterized by the words and deeds of Jesus, is compassion. Compassion literally means “to suffer together.” It is the feeling that arises when you are confronted with another’s suffering and misfortune and feel motivated to relieve that suffering. Compassion is much more than an emotion. One might say that it is a compelling emotion that drives someone to action; to actually do something to alleviate the suffering and pain of the other person. In today’s Gospel Jesus approaches the gate to a town called Nain. His disciples and a crowd are with him. Nain, which still exists today, is about five miles southeast of Nazareth. The place must have been familiar to Jesus because it is not far from the vicinity where He spent most of His life. As Jesus approached the gate of the town, a young man who had died was being carried out in a funeral procession on its way to the cemetery. He was “the only son of his mother, and she was a widow; and a large crowd from the city was with her” (Luke 7:12). The great heartbreak and sorrow of the widow of Nain is made apparent because of the large crowd of sympathizers who accompanied her. In Jewish practice, the death of an only child had national significance, hence the presence of a large crowd. “And when the Lord saw her, he had compassion on her and said to her, ‘Do not weep.’ And he came and touched the bier, and the bearers stood still. And he said, ‘Young man, I say to you, arise.’ And the dead man sat up, and began to speak. And he gave him to his mother” (Luke 7:13-15). The language here is very similar to to the language used when Elijah raised the widow’s son from the dead, where it also says that he “delivered him to his mother” (1 Kings 17:23). When Jesus tells the woman, “Do not weep,” her entire demeanor changes and now she has hope. Only Jesus could say that to her, for only He had power and authority over life and death and could raise the widow’s son from the dead.

Faith is often the central theme of many of the miracles performed by Jesus. In Matthew 9:27-31 we read about two blind men who came to Jesus and asked for healing. “And Jesus said to them, ‘Do you believe that I am able to do this?’ They said to him, ‘Yes, Lord.’ Then he touched their eyes, saying, ‘According to your faith let it be done to you’” (Matt. 9:28-29). Concerning the faith of the Centurion, Jesus said, “‘Truly, I say to you, not even in Israel have I found such faith’” (Matt. 8:10). To the Canaanite woman who asked Jesus to heal her daughter, Jesus said, “‘O woman, great is your faith! Let it be done for you as you desire’” (Matt. 15:28). After healing the woman who had an issue of blood for twelve years, Jesus said, “‘Daughter, your faith has made you well; go in peace’” (Luke 8:48). The spontaneity of Jesus’ compassion for the widow requires no expression of faith from her or from the crowd of mourners. In this way He is like Yahweh in the Old Testament who is unconditionally compassionate. Jesus pitied her for what she was and not for what she could do. Her faith was not a prerequisite for the divine action. Other examples in the Gospel of God’s compassion are expressed in the story of the Good Samaritan and in the parable of the Prodigal Son.

We are all created in the image and likeness of God. Therefore, we all innately have the ability to develop and practice the virtue of compassion. Compassion does not have to be as dramatic as raising someone from the dead but can be as simple as smiling and being cheerful, or even just opening a door for someone. Compassion is when we show hospitality to a stranger. Compassion can be as simple as sharing a hug or a handshake, or volunteering to help someone with a chore. Expressions of compassion which are often easy to do most often mean quite a lot to the person who is the recipient of the act of kindness. Many people are depressed and focus on negativity. We can show compassion by not dwelling on everything that people do wrong, but using our voices to tell others what they are doing right and encourage them to continue working towards their goals. The list of acts of kindness are endless, from donating clothes, food or money to the poor, volunteering in a soup kitchen, to nurturing friendships and taking the time to listen to people talk about their problems and woes. The grieving widow in today’s Gospel symbolizes anyone who is suffering, in pain, and in need of some kind of help or consolation. May God help us all to show compassion to the grieving widows that we encounter in our lives, saying to them “Do not weep,” and offer them our love and a helping hand in whatever way we can. Amen.