Doubt and the Monastic Journey

Source: Wonder
So many thoughts and questions barraged me, even thoughts against the basis of my faith, which hadn’t happened in a long time. Does God really exist? How do you know He answers your prayers? Don’t you want to have sex and a family? Will you really be satisfied as a monk? You’re such a sinner, how could you even dare to think you’re worthy of the schema?
Monk Kilian | 07 July 2010

Within the Tradition of our Church, monastic tonsure is considered a sacrament, a holy mystery, and thus forms for the monk or nun a liminal event in life. Many sources consider tonsure to the schema a “second Baptism,” and having been recently tonsured myself as a stavrophore monk, I can vouch for the aptness of this description. Tonsure is the beginning of another life: all sins are washed away, the old man is laid aside, and a new person is born with a new name, given by the abbot or abbess and taken by the newly-enrolled soldier of Christ in love and obedience. Like any mystery in the Church, tonsure itself and life as a fully professed monk is hard to put into words; I must admit I was a bit daunted by the task of speaking of doubt and tonsure simply because it defies expression on many levels. As with baptism or marriage, you cannot fully know what to expect on the other side of the font or the next day after the wedding. At these thresholds of our life in the Church, we have to leap out in faith, trusting that God is leading us along His path. 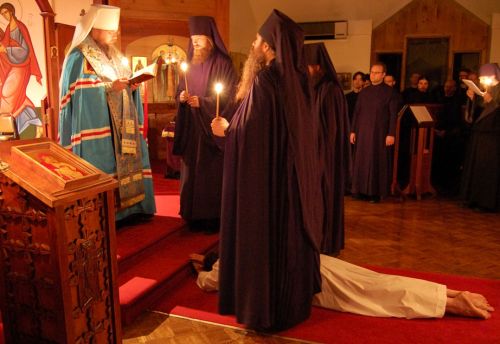 I had been a monastic for five years before my tonsure, and when I first entered the monastery, I was chomping at the bit to be tonsured into the schema. I had no clue about the hard work, both physical and spiritual, that monastic life would lay on me in order to peel away at least some of the passionate crust around my heart in order to begin to see who I really was, and who God wanted me to be. Yet this process, as necessary as it may be, is also very frightening. Over the past few years, I’ve had to confront my own weaknesses in a very matter-of-fact way. I’ve had to humble myself (or be humbled, as it were) and deny myself: my way of thinking, my desires for my life, my understandings of where life was going. In preparing for crossing the threshold of monastic tonsure, I was faced with a huge battle centering on belief and doubt. To the reader, it will hardly sound surprising that the evil one is far from thrilled to hear that a man or woman wishes to profess monastic vows. If we imagine the whole body of the Church as an army of the faithful here on earth regarding the spiritual life, monks and nuns are like the elite special-ops teams. We stand on the front lines of the battle for the world, and the enemy sends the fiercest attacks against us. This onslaught I too had to face in the weeks before my tonsure.

So many thoughts and questions barraged me, even thoughts against the basis of my faith, which hadn’t happened in a long time. Does God really exist? How do you know He answers your prayers? Don’t you want to have sex and a family? Will you really be satisfied as a monk? You’re such a sinner, how could you even dare to think you’re worthy of the schema? Why don’t you just do what you like doing? You’re good at academics, why throw a career away?

Not pleasant at all, that swarm of thoughts. The Fathers teach us simply to disregard these suggestions (in Greek, logismoi), saying that the second we start listening to them, we start becoming entangled in the snare, and the harder it is to escape. For myself, I’ll simply say that after weeks of this kind of attack, I was at the bottom of the barrel spiritually speaking. I was faced with a seemingly huge choice.

On the one hand, I had monastic vows before me. This meant a life of ascesis, of constant struggle to overcome my passions by God’s grace, of being rejected and scorned by the world, and often misunderstood even within the bosom of the Church. It meant being alone (this is the monos part in monastikos) and not having an exclusive partner to walk along life’s path with me. On the other hand, I had a life pleasing to the world and one leading away from life within the Church. This was a life that was easy, one according to my passions, one that could give me success and approval by many in society.

Finally, after much prayer and some wintry solitude in the cold north of Alaska (another story for another blog entry, perhaps), God filled me with such clarity regarding monastic life, and I hastened with joy to petition for vows, which my spiritual father accepted gladly. But while the doubts about tonsure in general had been conquered, doubts about that life in a specific way still lingered. What will my life be like after tonsure? What name will I be given? Seeing as I’m currently a student, I thought of how this might impact my relationships and affairs with classmates and the administration.

The day of my tonsure arrived, and even then, inclement weather forced the bishop to be delayed and the tonsure was moved to the next day. Many people came to me with sympathy, but I was laughing. God in His humor was showing me how utterly lacking in control I was, and how utterly provident and omnipotent He was. Tonsure would take place on His schedule and to His glory.

It’s been nearly a month now since my vows, and life is so beautiful, so pregnant with meaning in ways I cannot put into words. As one of my brother monastics said to me, you can speak much of the life of a professed monk, but you’ll never know it until you take that leap of faith into that life of obedience. I think now that I needed to experience this doubt so that I could then turn not to worldly wisdom, but faith, and make that leap into the Father’s embrace in my vows.

Caring for the Flock

I have many fond memories from my monastic “youth,” as it were — my three years as a…