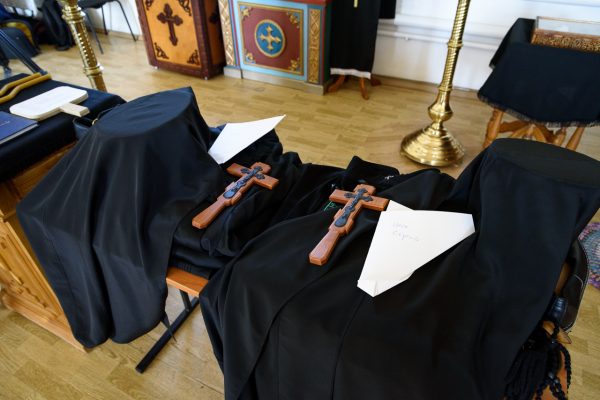 I imagine that very few Orthodox have ever observed the rite for the tonsuring of a monastic.  The first time I observed the rite was during my stay at St. Tikhon’s Orthodox Seminary in Pennsylvania, where a priest who had been recently elected bishop was being tonsured a monk prior to his episcopal consecration.  The Orthodox Church has for many years held to the practice of only choosing its bishops from among the monks, doubtless on the basis that only those who have proven themselves humble in their monastic life should be trusted to exercise authority over their fellows.  Our present practice of hustling episcopal candidates from the monastery altar to the episcopal throne without their having actually spent any real time in the monastery doesn’t quite fulfill the rationale for choosing only monastics as bishops, but that question cannot be examined here.  Here we simply look at the rite of monastic tonsure and the life to which it was meant to lead.

In the beginning, there was no specific rite of tonsure or liturgical way to make a monk.  A monk (from the Greek monachos, or “solitary”) was anyone who had left the world to dwell apart.  There were no promises made or formal clothing given.   Monasticism consisted simply of the individual’s choice to depart from society and live on its fringes, either completely alone or in the company of a few like-minded solitaries.  This occasional choice soon grew into a movement, as men came flooding into the deserted fringes of the world in enough numbers so as to constitute a kind of desert city.  These men came with all kinds of motivations, and from all kinds of backgrounds.  To avoid chaos and catastrophe, the flood needed to be organized and institutionalized, which it was.  In this process of institutionalization, several names tower above others—names like Anthony, Pachomius, and Euthymius.   One liturgical fruit of this long process of institutionalization is our present Orthodox rite of monastic tonsure. 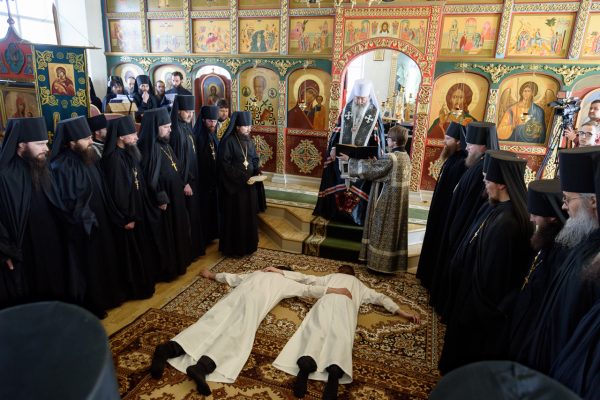 The present Orthodox rite of the little schema—what in the West would be “final vows” wherein the novice pledges himself to permanent monasticism—begins with the candidate prostrating himself (or herself) before the abbot (or abbess).  As befits such an occasion, the abbot offers many words of caution, warning the candidate against taking such a momentous step impulsively or casually, for there could be no turning back if the candidate later changed his mind the next morning.  The candidate was regarded as dying decisively to the world, and being born again to a new life, which is why the newly-tonsured monk was given a new name.  Dying is for keeps, and so is monastic commitment—hence all those long exhortations from the Abbot.

In the service, the abbot next questions the candidate, asking what he wants, in order to elicit the reply that the candidate wants to live a life of asceticism among the monks, and that he is choosing this life freely.  The candidate pledges himself to sobriety, chastity, poverty, piety, and obedience, and to stay in his monastery to the end of his days.  After another long exhortation, the time for the actual tonsure arrives.  Tonsure (or the cutting off of one’s hair) since ancient times has signified consecration to God.  As long ago as the giving of the Mosaic Law, Nazirites offered their hair to God as a sacrifice, an image of offering their entire bodies to Him.  The new monk therefore is shorn as a sign that he now belongs no longer to the world of men, but to God alone, sitting in solitude before Him.  Nowadays, the actual shearing is minimal, a snipping of a few token hairs, rather than a full cropping, but the intention remains the same. 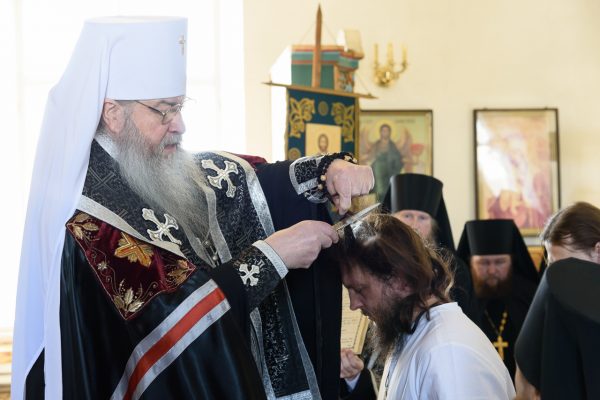 After the tonsure, the new monk is dressed in the clothing of his new state:  a long robe, a paraman (a square of cloth on which the cross is represented), a riassa or long-sleeved robe, a leather belt, a long mantle, a monastic veil, and a prayer rope.  The service concludes with the other members of the monastery giving the kiss of peace to the new monastic, each one asking the newly-tonsured monk his (or her) name.  The monk’s new life of solitude and struggle has begun. 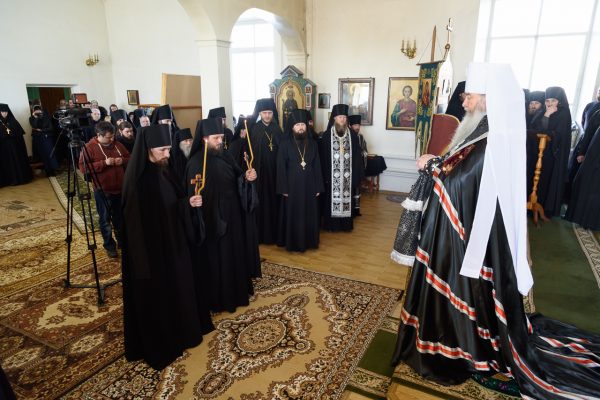 It is fair to say, I think, that the secular world has little appreciation for Orthodox monasticism.  Buddhist monks seem to be admired, and certainly the Dalai Lama is always sure to make the Best Sellers List, but in general, the world is somewhat perplexed by what seems to them to be a spectacular waste of time and talent.  All those young and gifted people vanishing from the world into a monastery, like stars sliding into a black hole—what’s the point?  Wouldn’t it be better for everyone if they remained in the world and offered their time and talents for the good of society?  An older and angrier generation of Marxists denounced the monks as parasites on society (part of the bourgeoisie).  In our day, the critics of monasticism may not go that far, but they do a fair bit of head-scratching trying to figure out how the people under the monastic veils could sensibly choose such a seemingly non-productive life.  Certainly there is more than enough work to go around if we would help our suffering world.  Shouldn’t the monks come out and lend a hand?

In fact, the monks are lending a hand through their prayers.  I pray regularly every day, but my little rule of prayer is nothing compared to the exertions going on behind the high walls of Mount Athos, as they pray not only for themselves but for all the world.  Of course, if one doesn’t believe that prayer “works”, then one must regard those exertions as futile.  But Christians do believe that prayer works, and that our merciful Lord hearkens to the prayers offered in faith.  Indeed, if the fervent prayer of a righteous man can accomplish much (see James 5:16), then the monks are offering an incalculable service to the world as they ceaselessly intercede for it.

Also, monks provide a service for the Church at large, for they help preserve its saltiness, and without them, the Church would be in perpetual danger of losing its saving savour (see Matthew 5:13).  God calls His Church to be in the world but not of the world, and the long history of Byzantium proves that this is a tall order.  The Church often finds itself functioning as an established State-church, working hand in glove with Caesar, and enduring all the temptations to moral compromise which have always attended such a working relationship.   The monks in their monasteries form a counter-balance to Caesar, a standing reminder that the Church belongs ultimately not to this age, but to the age to come.  Monasticism thus represents the institutionalization of the Church’s eschatological nature, an in-your-face witness that we are all just sojourners in this world, and that we are just visiting this planet.

We may not often see the monastic rite of tonsure, and in North America, Orthodox monks are comparatively few and far between.  But this tonsure and the life it represents are crucial to the health of the Church.   If the Church here is to thrive, we need to see this rite used even more than it is now.