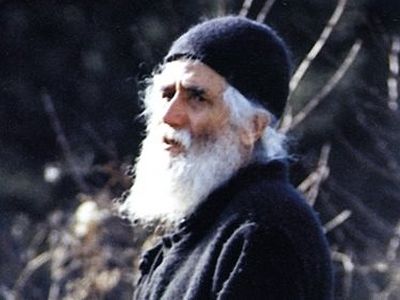 I’m reading the Life of Elder Paisios of Mount Athos by Heiromonk Issak (Editor’s note – now Saint Paisios of Mount Athos. Elder Paisios was canonized by the Ecumenical Patriarchate January 13, 2015. )  I must confess that my reaction is mixed. I do find some of story of his life very inspiring and enlightening–although it must be scaled down quite a bit before I can apply it to my life.  Nonetheless, it is particularly inspiring to see the joy of his ascetic endeavour and his humility, obedience and service to others. Joy is key for me. I am always wary of asceticism that produces the same effect on a personality as a ten-year prison sentence. I am also inspired by the Elder’s love and care for everyone–even Muslims–manifest during his building of the Stomio Monastery and in his love for the Bedouin children near Mt. Sinai.

However, I am also overwhelmed by Elder Paisios’ extreme asceticism–overwhelmed almost to the point of depression. Actually, I had to put the book down at the part where he returns to Mt. Athos after his time at St. Catherine’s on Mt. Sinai. I was starting to feel depressed, wondering, “Am I a Christian at all?”

Thank God, a little yard work with the Jesus Prayer brought peace to my heart and some clarity to my thoughts.

The first thing I have to accept is that I am not Elder Paisios. Nowhere close. I did not receive the same gifts nor the same calling. I must strive to be faithful with what I have been given and with the struggles that have been given to me. Of course I cannot imagine living as Elder Paisios did. God has not given me that calling.

One of the stories from the Elder’s time building the monastery of Stomio helped me on this point. The Elder had been rather harsh with a woman “who had taken a bad direction in life,” and although she was visiting the monastery regularly, she had been misbehaving in town. Shortly after he “gave her a bad scolding, and she left crying,” Elder Paisios felt his “whole body burning with a strong carnal sensation.” This warfare was so strong that even physical pain could not distract him from it, and it got worse by the hour. Finally it was so strong that he left the monastery and went into the forest hoping to be eaten by bears rather than give in to this carnal temptation that was overwhelming him. Collapsing on the path from exhaustion, crying out to God for help and trying desperately to find the cause for the trial or come up with some explanation, the Elder remembered the woman he had rebuked harshly.

“‘My God,'” the Elder thought,”‘if she [has] felt carnal warfare like this, how could the poor woman take it?’ That was it! I [the Elder] repented for my strict attitude toward her and asked forgiveness from God, and right away I felt like I had just gotten out of a cold bath.”

While a monk may experience severe trials in his or her monastic asceticism, people in the world also have ascetic trials of their own. A semantron may wake the monk early every morning for prayer, but at least it is at the same time every morning. A crying baby does the same thing with much less regularity. 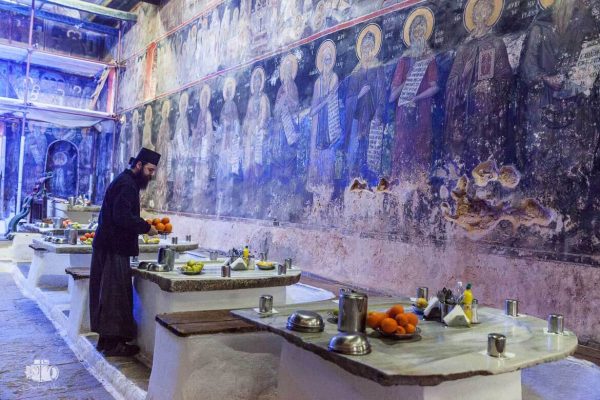 That is not to say that the trials are the same, nor to deny that the monastic life is indeed a higher–but not necessarily a better–life than marriage and family. Each has its own trials; each has its own rewards. I imagine that a successful monk probably hears and sees and knows God in ways more intense and clear than a pious layperson or married priest. But that doesn’t mean that God loves those in the world less. Not at all. Rather the differences in life and calling are manifestations of the various functions of the One Body of Christ.  All of Christ is saved, the whole body: the toes and the nose, the brain, the heart and the back of the knees.

So I think now I can go back and finish the Life of St. Paisios. He is truly close to the heart in the Body of Christ, while I am part of a toenail on the left foot. That’s OK. With joy I can be inspired by Elder Paisios’ joy and love for God. I can look for little ways I too can love God more where I am, doing what God has called me to do, where I am right now. And there is peace in that. And joy too. I like being a toenail. 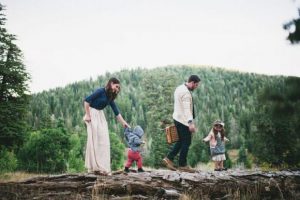