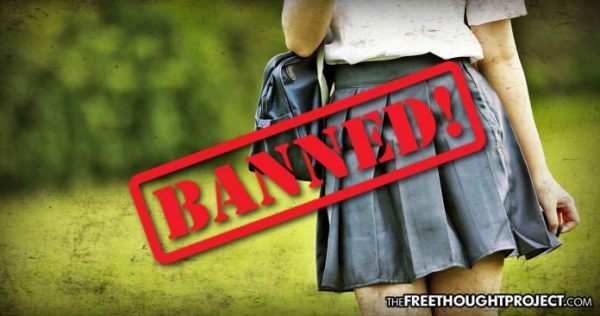 In what seems like a scene pulled from the pages of Orwell and Huxley’s fictional dystopias, dozens of schools are banning girls from wearing skirts in an effort to accommodate transgender students. Apparently, a girl wearing a skirt is offensive and must now be shunned, banned, and removed from schools. Pants for all—according to the state—is a step toward equality. But many students, including transgender students, say that forcing everyone to be the same, accommodates no one—and they are right.

There is a very disturbing trend happening in governments throughout the world in which bureaucrats are mistaking the idea of equal treatment under the law for the idea of equality. Under all governments, if all people do not receive the same treatment under the law, this can lead to discrimination, tyranny, or even genocide. However, when governments attempt to force their citizens to be “equal,” very similar detrimental side effects can occur. One need only look back at the 20th century and the tens of millions of civilians who died as a result of their governments forcing them to be “equal.”

Taking away the rights of some to force equality on others is the opposite of a free society. Regardless of sex, color, race, or religion, forcing equality steals away individualism and makes everyone not special. It peals back traits that make us unique individuals—in turn, taking away our humanity in exchange for citizenship.

The bottom line is that people are not “equal.” We should have equal rights but we should not be molded into equal people.

If you doubt the tyrannical nature of banning skirts and forcing females to wear pants, consider the place in which this already happens — prison.

In spite of its tyrannical implications, this chilling concept is spreading across the United Kingdom.

Over 40 schools in England have now banned skirts to force equality. According to the Sunday Times, Priory School, a secondary school in Lewes, East Sussex enforced a ban on skirts and ordered girls to wear trousers instead in an effort to accommodate transgender pupils, after students had asked why girls and boys had to wear different clothes.

Just because the students asked a question did not mean they wanted to be forced to all wear pants. But the bureaucrats couldn’t care less.

“We have a small but increasing number of transgender students and therefore having the same uniform is important for them,” Headteacher Tony Smith said.

But how is making everyone the same important for transgender students. By this logic, long hair and fingernails should also be banned.

The answer to an inclusive environment for transgender students in school is more freedom—not less. Allowing male students to wear skirts would be magnitudes more inclusive and it wouldn’t steal away the students’ humanity and individualism.

Renowned feminist, Naomi Wolf agrees and noted that she believes “that if everyone is offered the option of both skirts and trousers, everyone can find his, her or their comfortable fit.”

While it may seem odd to offer male students the option of skirts, it is a far better option than restriction.

Although they are forced to wear trousers, many of the students are expressing outrage. Diane Burdaky, parent of a pupil at Philips High School told RT that there had been no consultation process and that the children did “not want to wear trousers all the time.”

She said, “I was very shocked. There was no consultation with any parents or students. There was no explanation for the ban. No reasons given whatsoever. I know the children at school do not want to wear trousers all the time.”

What’s more, forcing everyone to be the same is actually the state discriminating against transgender students by telling them that they can’t be themselves.

Sadly, England appears to be the model for the West’s plan for the Brave New World and these hypocritical and contradictory policies seem to be spreading. We would all do well to heed the words of the late Milton Friedman:

“The society that puts equality before freedom will end up with neither. The use of force to achieve equality will destroy freedom, and the force, introduced for good purposes, will end up in the hands of people who use it to promote their own interests.”

His Beatitude Metropolitan Onuphry was presented with a church award.

The Feast of Pentecost Celebrated at…

On Sunday, 20 June 2021, the Patriarchate of Jerusalem celebrated the feast…

Boredom is one of those self-defining words. For me, the experience of…

Most viewed articles
The Reason Christ Revealed Himself121
How Often Do We Come to Church and Worship God?119
Using Boredom to Cultivate the Soul103
Patriarch Kirill’s Sermon on Holy Pentecost83
The Church’s Birthday – on the Feast of Holy Pentecost74
Holy Pentecost Celebrated at Kiev-Pechersk Lavra63
The Feast of Pentecost Celebrated at the Patriarchate of Jerusalem43
Patriarch Kirill Congratulates Metropolitan Onuphry on the 50th Anniversary of His Ordination43
Sunday of St. John of the Ladder – One Step Short of Paradise1
Flying By The Instruments1
Most popular authors
Pravmir.com team149
Archpriest Geoffrey Korz121
Priest Luke A. Veronis119
Eric Hyde103
Patriarch Kirill of Moscow and All Russia83
Metropolitan Hilarion (Alfeyev)73
Archpriest Lawrence Farley1
Maria Trushanina1