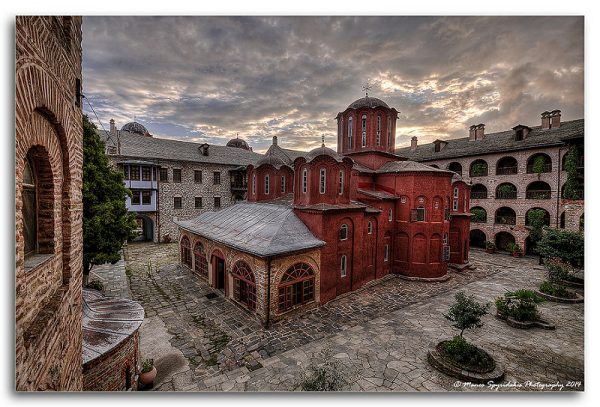 A regular meeting of the Sacred Community of Mt. Athos was held on February 28, during which the Ukrainian issue and the possibility of the Ukrainian schismatics visiting and serving in Athonite monasteries was raised again.

As at previous meetings, the Sacred Community did not find consensus on the matter. Some representatives, including that of the Russian St. Panteleimon’s Monastery, argued for rejecting the so-called “Orthodox Church of Ukraine” (OCU) altogether, reports Tsargrad, with reference to its source within the Sacred Community, as well as Romfea.

On the other hand, several Greek monasteries—the Great Lavra, Iveron, Koutloumousiou, and New Esphigmenou, expressed the opposing view—that the schismatics should be accepted.

According to the source, the Sacred Community therefore decided that if the Patriarchate of Constantinople provides the clergy of the OCU with letters of recommendation to visit the Athonite monasteries, the Community will not confirm them by its own recommendation letters.

Such a practice has long been in place for when representatives of the Local Orthodox Churches visit Mt. Athos. The Community’s decision means that from now on, every Athonite monastery has the right to decide for itself whether or not to receive representatives of the Ukrainian nationalist-schismatic church.

Instead, neutral cover letters will be issued which will not include a recommendation to accept the representatives of the OCU, to which the letter from Constantinople will simply be attached.

Despite this neutral decision, the above-mentioned Greek monasteries drafted a joint statement that was submitted for the meeting’s minutes and which denounced “Russian interference” and the violation of self-governance status of St. Panteleimon’s Monastery, reports the English edition of Romfea.

The statement also claims that the Russian Church has urged wealthy Russians to invest in Russian monasteries rather than Athonite monasteries, though it is unclear how this constitutes “interference” in Athonite affairs.

The statement also refers to the recent visit of a delegation from the schismatic Ukrainian church and notes that they were accepted by certain monasteries in retaliation for perceived Russian interference: “These visits would have been avoided or would have taken place much later if there was no immediate and devious involvement of the Russians in the internal issues of Mount Athos.”

The monasteries also compare St. Panteleimon’s Monastery’s stance against receiving the schismatic clergy to epistles from the schismatic Esphigmenou Monastery in the 1970s. The statement also complains that the Ecumenical Patriarchate is used as a scapegoat for complaints while claiming the Russian Church concelebrates with Catholic priests, though they offer no examples.

Concern is also expressed that St. Panteleimon’s tends to be isolated and could thus become a tool in the hands of foreigners—a trap which the monasteries must not fall into. The four Greek monasteries also call on St. Panteleimon’s to cease commemorating His Holiness Patriarch Kirill of Moscow and All Russia in addition to Pat. Bartholomew, which is against the Athonite charter.