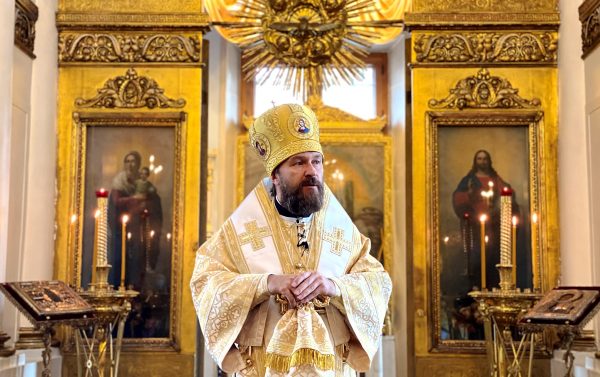 In the Holy Gospel today we heard about how our Lord Jesus Christ raised from the dead the son of a widow, who was already being carried for burial (Lk. 7:11-17). In the Epistle we heard the words of the Apostle Paul about how he was lifted up to the third heaven and heard Divine words which cannot be heard and which cannot be spoken in human language ( 2 Cor. 12:2-4).

We don’t know what happened with the youth, who was raised by our Lord, after he died. However, we understand that when a person dies, his soul leaves his body and meets that world, the existence of which is known only by people of faith and of which people who are not religious have no knowledge and cannot even guess. The latter think that only our world exists and that it was formed at some unknown time for some unknown reason. Some say that the world came into existence as a result of some kind of “Big Bang,” and others offer different explanations and theories. Only people who believe in God understand that this world came into existence because it was created by God. In addition, only people of faith know that alongside this material world there exists also a spiritual, invisible world, for the life of which we were all created.

Namely, our earthly existence moves towards this world. Here, we live only for a certain amount of time, but there we will live forever. Through death we pass into this eternal life. We pass from one world into the other, from the physical world into the spiritual, from the world where time flows and everything changes, to the world where time does not exist, where nothing changes and where everything stays the same for eternity. God exists both in this and in the other world. Every person is lead individually in his own way by the mystical paths of God. God settles one person here for a long time, and another person for a short time, because only God knows that hour when a person must pass into eternity.

Our entire earthly life has value if it is spent seeking eternal life. No matter how long one’s life may be, it is always only for a short time. The life of a person who dies, like the young man from Nain, at a very young age, seems unjustly short. On the other hand, the person who dies after having reached deep old age, thinks that his life has flown by as if in an instant. What is important is not how long we live, but how we lived our lives. No matter how long a person has lived in this world, his life is like a brief moment compared to the eternity which waits everyone.

While in this earthly life, do we seek and strive towards eternal life? This is the question that we must ask ourselves. When we come to church, are our minds lifted up to heaven? Do we hear words which cannot be spoken, which are impossible to speak in human language? This is what is truly significant. Will we live longer or shorter, richer or poorer, in one country or in another? None of these things are decisively significant.

If through prayer, through the Holy Mysteries (Sacraments) of the Church, especially through the Holy Eucharist, we seek the world on high, then we, like the Apostle Paul, will hear these words which cannot be spoken, then our spirits will be carried away into paradise. It is then that the Kingdom of Heaven will cease to exist for us from some kind of seemingly uncertain eschatological perspective, but as a reality of our earthly life. In the final analysis, this is why the Church exists. This is why we have Divine services in church, this is why the entire church is adorned with frescoes, why icons are hung on the walls, why choirs sing in the church, why the deacons swing the censer and the incense rises up. All of this takes place in order to incline us to prayer and so that our prayer and participation in the Holy Mysteries would take us to that same place to which was lifted up the Apostle Paul, so that we would know and understand through personal experience that another world exists, that there is another life and so that we would not fear death, knowing, that death is a passing into eternal life, that Christ is the Resurrection and the Life, that through death everyone will pass into another life, which is better, more wonderful and richer than earthly life, because waiting for us there is our Lord Jesus Christ.

This is why the Church has established that we read on the same day how the Apostle Paul was taken up to the third heaven and, in the Gospel, how the Lord raised from the dead the son of the widow of Nain. Why did the Lord raise him? Not in order for him to remain forever on the earth. We don’t know the fate of this young man, but we know that after a certain amount of time he died again – in order to enter into eternal life. The Lord raised him in order to comfort his mother, a widow, and to show the people that death is not a finality, not insurmountable, and that God has conquered death. In the final analysis, all the same, God eventually took to Himself the soul of the young man, the same as the Lord in His time will take all of our souls as well.