Source: TRUNEWS
Natalya Mihailova | 02 June 2017
"We are Christians and we will die Christians", one of the powerful statements uttered among the 30 Coptic Christians violently shot on a bus in Egypt by Isis militants. Survivors are speaking out and the horror lived is unimaginable. Boshra Kamel, the 56-year-old bus driver, told the Washington Post. “Even the little children were targets to them.” 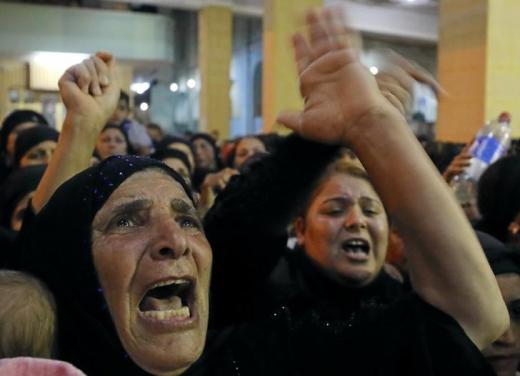 Relatives of victims of an attack that killed at least 28 Coptic Christians on Friday react at the funeral in Minya, Egypt May 26,... MOHAMED ABD EL GHANY May 29, 2017 10:24am EDT

“In a second [the gunmen] got inside and shot at every living and moving object they could see,” Boshra Kamel, the 56-year-old bus driver, told the Washington Post. “Even the little children were targets to them.”

Kamel was shot numerous times, but survived by pretending to be dead. Tragically, others weren’t not so fortunate. A few of the other survivors shared similar accounts with the Post, with Samia Adly, 56, explaining that her son, husband, granddaughter and nephew were martyred on the bus; her granddaughter, Marvy, was only 4 years old.

Another individual named Nadia Shokry said that the Christians who survived the initial round of gunfire were told that they must recite the shahada (the Islamic proclamation that there’s no god but Allah and that Muhammad is his messenger), become Muslims or be murdered.

People on the bus reportedly refused and, according to Kamel, the extremists became more and more angry and violent as the Christians appealed and prayed to Jesus. According to The Post, after the militants boarded the bus, they asked survivors of the first round of gunfire to “either recite the Islamic shahada creed, live as practicing Muslims, or be killed,” said Nadia Shokry, 54, who was shot three times. The passengers began to pray.

“The more we prayed for Christ, the angrier they became and started shooting again and more violently,” Boshra said.

“We told them that we are Christians and we will die Christians,” Adly said as she clutched a cross that a monk had given her at the hospital.

In the end, though, the grieving passengers — who wouldn’t abandon their Christian faith — have forgiven the assailants.

“We forgive them,” Shokry told the Post. “I pray God touches their hearts and changes them so that they see the right path.”