On any given Sunday, what is the most likely reason for why a youth might not be in Liturgy (or Mass, or Morning Worship, or Praise/Celebration/Happening)?

Because, statistically speaking, he or she is probably not.

The present reality is very different from that moment of Pentecost, when thousands entered the new apostolic church and continued to do so at an obviously miraculous rate. Contrary to the nattering doctrines of church growth and evangelism consultants (and especiatlly the hysterical secret-agent folk of the New Apostolic Reformation), the “numbers added daily” was never a goal for the church, or even a “value.”

It was a sign, rather, and the signification was obvious. The entirety of human nature, renewed and assumed into Christ, had become the Holy of Holies. The new eschatological Israel was now present and real.

But nowadays, there is no such sign — at least, not phenomenonally here, not in the globalized West. The inescapable fact is that the Christian West is living in a patently “John 6.66” moment. If you do not know this verse, with its troubling numerical reference, permit me to refresh your memory:

“After this many of His disciples drew back and no longer went about with Him.”

It should be noted that the incarnate Second Person of the Trinity actually experienced a decline in His attendance figures. This was immediately after His troubling doctrinal teaching on the Trinity and the Eucharist.

Across the board, “Christian participation” in religion is in sharp decline — even in the Orthodox community, much as we would rather not admit. And please do not bring up megachurch numbers as a counter-narrative: those numbers mostly represent people who have laterally migrated from one Christian community to another. (The megachurch is to more authentic neighboring parishes what a brandnew Super WalMart is to mom and pop stores downtown.)

There are a number of reasons for this unprecedented net decline — most of which I would like to roll up into a single term:

It is not the Romans — they have been “christianized” long ago.

It is not the Mormons or Moslems — who are equally non-Orthodox (the “christologies” of these two traditions  are not completely dissimilar).

It is true that in other places — like the Middle East and parts of Africa — that Islamicists are waging an aggression against Christian populations. But in the West — in Europe mostly and increasing in North America — mosques are established mainly in the gray shadowed absence of faithful Christianity.

The Muslims in the West are displacing no one.

And besides — you probably won’t believe this — according to the 2008 Pew Religious Landscape Survey, the Eastern Orthodox and Muslim communities occupy the exact same proportion of the American population: and that is a whopping 0.6%. No, that isn’t a typo: not 6% … but 0.6%.

The Mormons, contrary to a lot of scare-talk, only amount to 1.7% of the total population.

Obviously, the Enemy is not Chinese, nor North Korean, nor foreign or human at all. And that, by the way, is why racism is so patently anti-Christian — racism is a blasphemous division of human nature, even a fictitious fracturing of the icon of Christ. For the Orthodox, at least, Christians are prohibited from viewing any human as “the Enemy.”

Contrary to these cultural and racial phobias, there is a much bigger enemy that accounts for the across-the-board decline in religious belief and church attendance.

This enemy accounts for the fact that while most Americans still believe in a God and an afterlife, these beliefs are really “opinions,” and loosely-held attitudes.

Real beliefs actually produce real religion, like church attendance, prayer and charity. But “religious opinions” have no power to produce any real religion.

The mere fact that Americans “agree” with a survey statement reveals only an observation that Americans have a positive opinion on God’s existence, with the strong likelihood that they might not want to do anything at all about that opinion.

If religion is demoted to the level of opinion, or, more accurately, “consumer choice,” then like any other choice it can always be easily replaced and switched out with something more convenient or entertaining. Maybe something more “personally fulfilling” will come along.

This state of affairs is really contemporary stuff — religion is not only privatized now, it is also commoditized. Like everything else, religion is passed through a “values clarification” mental evaluation that judges whether or not it is “doing anything good” for the individual. Is it entertaining? Is it fulfilling? Are my kids happy in the youth group? Am I attracted to the leaders and the crowd? Do I feel better about myself?

If not, well then … I’ll just mosey on over to the big megachurch praise center with the Starbucks in the atrium and a rock concert for my kids (and me).

Or just stay home and do a Netflix binge on “House of Cards.” Then go out for a champagne brunch with much prettier people.

Not much difference there. They are both private, consumerist and gnostic.

The Enemy consists of two forces that may or may not be deliberately executed in concert. One is external to the Christian community — and that is the utter consumerification of modern globalized culture. Everything must be commodifiable — if it cannot be (like real doctrine, like sacrament, like real goodness and beauty), then it is relegated to the private sphere. And this private sphere is considered meaningless and without public value.

But Gnosticism has never met such a friendly atmosphere as this present Totalistic Banal Culture of the universal marketplace.

Think of it: our totalitarian banality — where God’s infinity, beauty and goodness are almost completely obfuscated — is like a giant ocean of gasoline, and gnosticism is a single Bic.

The whole globalized marketplace will develop an allergy to Christianity, particularly to Orthodoxy. The more theological, and sacramental, and traditional and anti-passion a church is, the more “de-valued” it will become.

This is the challenge. We need a strategy. Stay tuned. 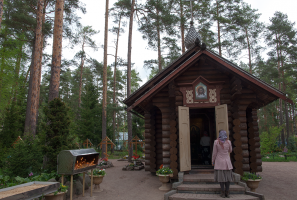