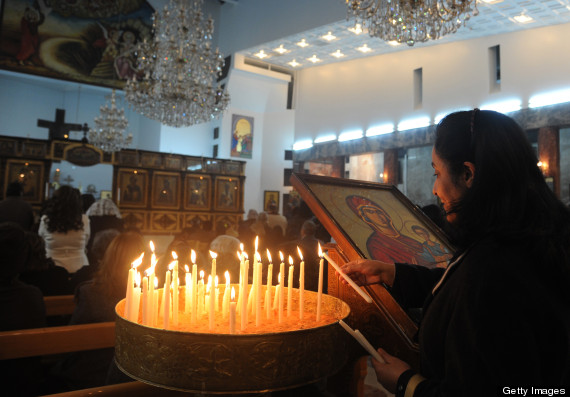 These days, there is a lot of anxiety about the end of the world. It doesn’t seem to matter whether you’re a religious person or not.

Many Christians (outside the Orthodox Church) think about “the End” as a horrific time of the Rapture, Tribulation and the Battle of Armageddon. In an oddly related way, secular non-religious folk have their own brand of dreary “end times” eschatology. They’re convinced of equally horrific figures like over-population, the over-warming of the earth, the Yellowstone Caldera, asteroids hitting the earth, catastrophic viral epidemics, even the take-over of human civilization by artificial intelligence.

I am not exaggerating here, nor am I poking fun at either of these too-large groups of people. I think we are right to be concerned about some of these issues.

But we are not right to be so afraid. And no one has a right to be a fear-monger who whips up such fear, whether they are religious or scientific. People can learn to be better stewards of the earth with its flora and fauna without browbeating them with specters of environmental collapse. Too often, a lot of anxiety is stoked by breathless projections of over-population and demographic change — projections, I might add, that are often based on some pretty lousy handling of statistics. And these projections, in turn, are often used for political purposes, including legalized abortion and politically-expedient ethnic strife.

With regard to the bogeyman of “artificial intelligence,” we should keep in mind that there is an infinite difference between machine computation and human consciousness: even a super quantum computer like the IBM Q System One will never approach the consciousness of my West Highland terrier Wilbur, let alone any human being. We should also “follow the money”: behind every “artificial intelligence” and “big data” scheme is a bunch of programmers who are quite human, who are in the pay of a hidden away group of people who are making, out of big data, a lot of big (and wicked) money.

There is a significant increase, now, of cases of depression and acute anxiety — an increase that is due in large part to fear about the future and the end of the world (or our American way of life).

Likewise, too many Christians (maybe even some Orthodox) are frightened of the future, and have fallen into a soul-crushing dread of the Last Day (not to mention the terror of afterlife retribution).

But salvation — or rather, theosis — should be drawn by love, not driven by terror … invited by the Shepherd, not bound by a taskmaster. I understand that such a proposition is usually dismissed as mere sentiment, and is associated with people who believe neither in Scripture or the Creed. That is not my case whatsoever.

I understand, too, that there have been several Fathers of Holy Tradition who have insisted that raising these terrifying eschatological specters in sermons (and ecclesial rhetoric in general) is necessary to encourage virtue among the faithful. Many fundamentalist preachers in the Protestant community hold the same opinion. This is a sort of “instrumentalization” of eschatology.

But I wonder about this. It is not clear to me that eschatological terror produces real virtue at all. It is more likely to produce despair, if not apostasy and atheism. It is not for nothing that Evdokimov suggested that one of the main causes of European atheism was the legacy of the Calvinist teaching of double-predestination, and a voluntaristic theology that had more in common with Islam than the Trinitarian theology of Holy Tradition.

So there are a few things we should keep in mind — considerations that are even more important than the “secular” fears above.

For one thing, the Rapture Theory is a recent invention (from the mid-1800’s) from the Revivalist segment of the Protestant movement. It should go without saying that this teaching about a “Rapture” is at best heterodox, and at worst is heretical, if not pagan. We Orthodox should never worry about being “left behind,” simply because there is no such thing as a “Rapture.”

You read that right. When Jesus returns at the Second Coming, that will be the Last Day, the Great Judgment, the General Resurrection, and the Universal Transfiguration of Creation by the Holy Spirit all at once. These events will not be separated into separate chronological events.

This is what is meant by our affirmation of faith in the Nicene Creed: “… and His Kingdom shall have no end.” This statement was added at the Second Ecumenical Council, just for the purpose of overcoming the tendency to impose a chronological sequence on the events of the Parousia.

Thus, there will be no separation, no discrete chronological intervals, no gaps. 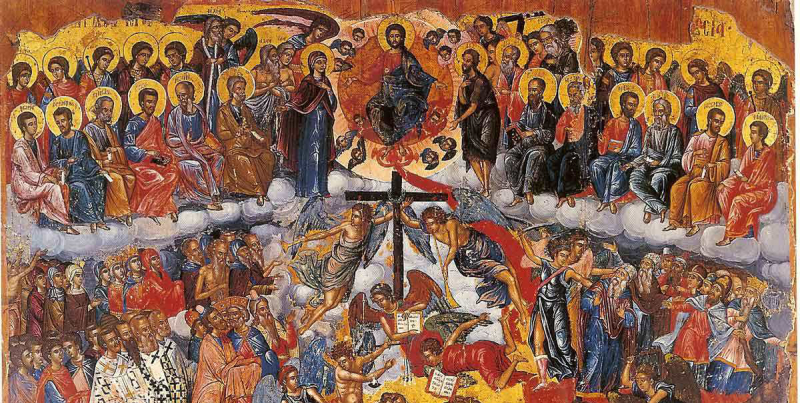 For another thing, the book of Revelations (or better, The Apocalypse of St John the Theologian) is a special kind of biblical literature that we call “apocalyptic.” This means that very often, there is no simple, “plain reading” of the text. This is true for all biblical passages that talk about the End Times and the afterlife, including Jesus’ description of the End Times in Matthew 24.4-36 (and its parallels in Mark 13.3-37 and Luke 21.8-36), and Jesus’ description of the afterlife in the Parable of the Rich Man and Lazarus (Luke 16.19-31) and His answer to the Sadducees about marriage in heaven (Matthew 22.29-30).

If the End Times (and “life after death”) are discussed in the Bible (and the Fathers), then great care has to be taken in trying to understand these passages. The Apocalypse of St John in particular requires a thorough knowledge of not only the Old Testament apocalyptic of Daniel and Ezekiel, but also similar texts in the Maccabees and Esdras, and even the non-canonical texts of Jubilees and Enoch. There are many difficult symbols that have to be interpreted with much prayer and deep wisdom and hard scholarly work. Simple “what does that mean to you?” neighborhood Bible studies and Sunday Schools can and do take disastrous turns when venturing into the mysterious space of Revelation.

And there’s one more important thing. The Orthodox Church has no single dogmatic, mandatory doctrinal statement about the End Times, other than “… and He shall come again with glory to judge the living and the dead, and His Kingdom shall have no end.” There have been, indeed, a lot of Patristic teaching about the End Times that goes into more detail than that — but these specific interpretations are not at the level of Orthodox dogma.

But the End Times passages in the Fathers and in the Bible describe clearly that, to be sure, there is a constant struggle with the spirit of the Antichrist in this here and now. We live in the interval between Pentecost and the Last Day. At times, the work of this evil power will seem overwhelming. Some times, we struggle with the Antichrist in our own familiar communities, even in our own consciousness. Many times, there has been persecution inflicted from the outside, resulting in unimaginable suffering and martyrdom. There has never been a “Rapture,” because the Body of Christ is called to suffer with humanity and the world, not to cravenly escape from its travail.

But there has always been the constant spiritual Presence of Jesus Christ — the gift of Pentecost.

Through it all, the Holy Tradition of Orthodoxy witnesses and celebrates the even greater power of the Body of Christ. Christ is reigning at the Right Hand of God the Father, and even now the Father is delivering the Kingdom — realizing the glory of Christ through the Holy Spirit — to His Son: “Sit and My Right Hand until I make Your enemies Your footstool” (St Peter in Acts 2.34-35, quoting Psalm 109.1 LXX).

The New Jerusalem is even now descending (Revelation 21.2), and the Kingdom of heaven is at hand (Matthew 4.17 and about four other places). It is our part, as the Church, to cooperate with God in receiving the actual landing of the beautiful city — a “landing” that will be accomplished at the Last Day.

If a person is overcome by dread, and becomes despairing of the End Times — whether they are Christian or secular — then they have not been thinking about the Last Day in an Orthodox healthy way. The Last Day fills us with hope: if there is no hope, then we must have been tuning into the wrong station (or looking at sanctimonious-but-dreadful web sites).

“There is no fear in love; but perfect love casteth out fear.” St John wrote this in his first epistle (4.18). The early Christian community knew this well. When they thought about the end of the world, their attitude sharply differed from the modernist one of panic and dread.

They knew, beyond any doubt, that the Last Day would be the return of Jesus Christ to the world in glory. Unlike his first coming in Bethlehem, this second coming would be obvious to everyone. The entire world would recognize him at once as the loving God, clearly beautiful as the powerful but merciful Prince of Peace.

At that moment, the entire universe will be bathed in glory, and in the fullness of divine love.

To be sure, there will be those whose entire life is built on violence and hatred, and their experience of this Last Day glory will be appalling. According to Orthodox doctrine, this horrible allergic reaction against Divine Love is exactly what hell is. Obviously, the devil is the worst, most insane, case of this sort of existential “anaphylactic shock.”

But to those who live for love, who breathe in peace, who give their lives away in mercy and service, who wait upon beauty and goodness, who seek to be deified in the Body of Christ — then for these, the Last Day when Jesus comes back to this earth will be a day of unbounded joy.

These early Christians looked upon the Last Day with hope. They had a motto: “Marana Tha!” Which means (from the Aramaic), “Come quickly, Lord!” They wanted to see, in their own lifetime, the Lord who calls us all his “friends” (John 15.15). Not enemies or slaves of fate and objects of deterministic manipulation, born only to sorrow, not lashed by fear.

The end of the world is really all about the return of the Friend, the infinite Lover of humanity. It is something to be hoped for, and lived for in breathless anticipation.