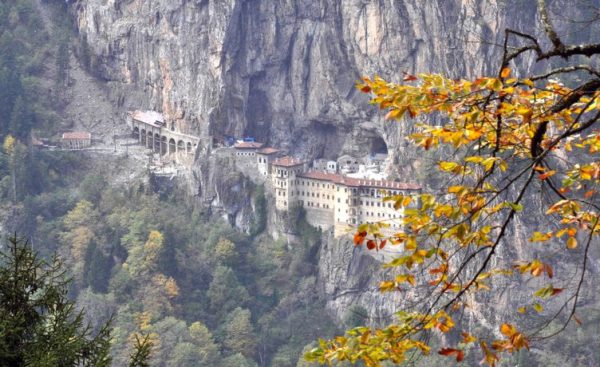 Sumela Monastery, the Greek Orthodox edifice built in 385 AD which was included on UNESCO’s temporary list of World Heritage Sites in 2000, was reopened on Tuesday by Turkish President Recep Tayyip Erdogan in a videoconference ceremony, reports Greek Reporter.

The Turkish President, who only last Friday attended a Muslim prayer service at the former Hagia Sophia cathedral in Istanbul after reconverting it to a mosque from a museum, had high praise for his country’s undertaking of the historic monastery’s restoration.

In an apparent response to the universal opprobrium hurled at the Turkish leader after that event, Erdoğan declared at Tuesday’s opening “if Turkey was disrespectful toward different cultures, as some Western nations claim, it would not have restored and preserved such historical artifacts.”

The Turkish President assured the public that his country’s Orthodox citizens would again be able to attend the Litany of the Blessed Virgin Mary on August 15 at the monastery, a religious service that they could not take part in for the last several years due to the extensive restoration.

Located in Turkey’s Black Sea province of Trabzon (the ancient city of Trebizond) the monastery, located at an altitude of 3,937 feet, had for centuries served as a place of pilgrimage because of its great religious significance to all of Greek Orthodoxy.

After 88 years of banning access to the Byzantine site, Turkey had reopened it on Aug. 15, 2010. Due to environmental degradation of the cliffs on which the monastery is precariously perched, restorations began in February of 2016, and the buildings were then closed to visitors.

The restoration work, mostly addressing the stability of the cliff under which the monastery stands, was halted several times due to weather and the outbreak of the coronavirus this past Spring. However, conditions improved enough that the works got underway again in May.

Scaffolding has also now been installed to further protect the monastery and its visitors from falling rocks.