Patriarch Theodoros II of Alexandria and All Africa: One Must Not Yield to Pressure on the Church in Ukraine 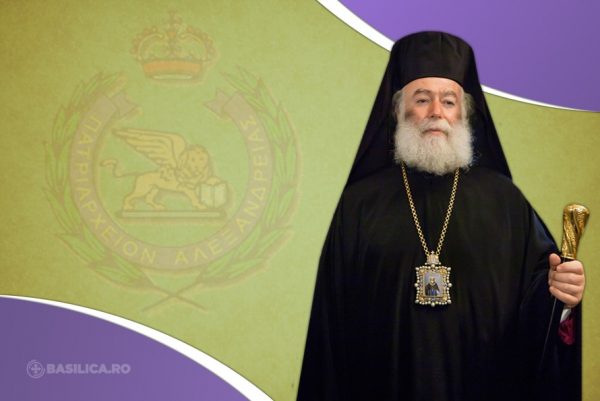 His Beatitude Theodoros, Patriarch of Alexandria and All Africa, came to Moscow for the 1030th anniversary of the Baptism of Rus’ and spent in Russia more than one day. He spoke about his visit, the view held by one of the oldest and largest Local Orthodox Churches in the world on the situation of the faithful in Ukraine, the political pressure exerted over the problem of autocephaly, the persecution against Christians in Africa and the problem of refugees, in an exclusive interview with the RIA Novosti news agency.

– Your Beatitude, what is the primary purpose of your visit, why did you decide to take part in the celebrations devoted to the 1030th anniversary of the Baptism of Rus’?

– I have come because I love Russia very much and from my youth wanted to feel what the Russian life is like, which means to belong to the Russian Church. Over thirty years ago I came to serve in Odessa as the Patriarch of Alexandria’s Exarch for Russia, and since that time my love becomes ever stronger. And though I was to be on an Orthodox mission in Africa in these days, I have put it off and have come over here. When one Church rejoices, another Church should rejoice too.

– What do you think about the situation of the canonical Church in Ukraine and the problem of autocephaly discussed there today?

– The Church should be governed according to sacred canons. Politicians have their own considerations, guidelines and instructions but politicians come and go whereas the Church has existed inviolably for already two thousand years now. In this sense, the Patriarchate of Alexandria agrees with the opinion of the Russian Church that political pressure must not be yielded to. It is wrong that when states are divided and then the Church has to be divided too.

– What countries and nations are united today by the Orthodox Church of Alexandria, and how many faithful it has?

– I have in my jurisdiction 54 countries, two thousand schools, three thousand hospitals, and I think over 15 million Orthodox Christians. We would like to have more missionaries because the number of believers is ever growing.

– How does the Orthodox mission in Africa progress and how are relations with people of other confessions built?

– We have good relations with both Catholics and Protestants; the complexities and realities of life make us step over misunderstandings. We often encounter poverty, death, diseases and, naturally, we help each other because the conditions are very rough. We cannot afford such luxuries as long conversations about doctrinal versions as we look in the eyes of thousands of children who hold out their small hands begging for food.

– Where does a threat to the life of Christians exist today?

– Mostly in South Sudan, Libya, Kenia and North Africa. We are very much disturbed by the situation in the Middle East. The epicenter is in Egypt (where the city of Alexandria with the see of the Orthodox Church of Alexandria is situated – ed.). But, thanks God, the present President Abdel-Fatah al-Sisi has exerted active efforts to finally eliminate, disband the terrorist forces and call upon people who belong to different religious and ethnic groups to live in peace.

– What is the most important thing in relations with the Muslims?

– It is very important that we should distinguish between the Islam of extremist trend and the Islam confessed by people who live in peace reading the Quran and praying, and we see this difference better than any other does.

– What other problems of the Christian world are urgent for you?

– Early this month, Primates and representatives of Eastern Churches met in Bari (among the participants in the meeting initiated by Pope Francis of Rome was Metropolitan Hilarion of Volokolamsk, head of the Moscow Patriarchate department for external church relation – ed.). And each spoke about the complexities he has to encounter. I spoke about the problem of refugees because North Africa is the door through which people pass crossing over the Mediterranean to get to Europe. Refugees are an enormous problem that has not yet been understood and settled by Europe.

– What do you think about today’s Russia and her religious life?

– I was very glad that during the procession with the cross to the monument to Prince Vladimir after the Liturgy in Moscow, I found myself marching side by side with President Putin, who was interested in the situation in Egypt and the president of the country whom he had invited to come to Russia. And he expressed his heartfelt condolences over the terrible fires which have made their toll on the life of people recently in Greece. We all worry about one another.

I thank Patriarch Kirill with all my heart as he with great love has helped me to carry out my service. The Russian Church is a strong Church. We are an historical Church. I am glad that we have walked side by side for so many years.

I rejoice in seeing the development of Russia, as with each of my visits I see cities and villages becoming ever more beautiful. The Russian people are a heroic people. I would like to call upon people to stay faithful to Orthodoxy, to have hope, love and optimism. Christ is the peace of the world.