Euthanasia and The Sixth Commandment

Does a person have the right to end his life with dignity? Must a physician or a guardian prolong a person's life when it is obvious that he has no chance to lead a "normal life"? Can an ethical physician cut short the life of a hopelessly sick person to free him from unbearable suffering?
Archpriest Victor Potapov | 20 April 2007

Thou shalt not kill.

All societies have attached great importance to death and dying. Our many
forebears who lived in agricultural communities accepted death fatalistically:
Death was just in the nature of things and accepted with customary ceremonies.
Contemporary industrial and postindustrial societies, however, have new set of
experiences and sensibility in the problems of death and dying. Medical science
and technology permit us to prolong life, and we live much longer than our
forebears. However, many older people do not find that the additional years turn
out to be the best time of life, but that they are a slow and steady advance
into enemy country.  For some, this experience can be unbearable.

In 1990, Americans were shaken by the following event: Dr. Jack Kevorkian, a
retired pathologist, constructed and offered to interested persons a device that
journalists christened “the suicide machine.” At the request of a 54-year old
woman who was suffering from Alzheimer’s disease, he inserted into one of her
veins a syringe connected to this machine. The patient pressed a button, a
solution of potassium chlorate began to enter the vein, and within a few minutes
her heart stopped.

In the Netherlands, the sick who experience unbearable sufferings can now ask
a physician to help them die. If several physicians testify to the incurability
of the illness, the sick person can get a lethal injection. Opponents of such
“medical assistance” are careful to point out that such injections–when used to
execute the death sentence for criminals in American prisons–are frequently
called “a cruel and inhuman punishment.”

Does a person have the right to end his life with dignity? Must a physician
or a guardian prolong a person’s life when it is obvious that he has no chance
to lead a “normal life”? Can an ethical physician cut short the life of a
hopelessly sick person to free him from unbearable suffering? These questions
are timely because life expectancy keeps increasing, and mankind strives to
better the quality of life on earth. Every physician and priest and every other
person who has anything to do with the sick and dying must answer these
questions. The Church does have a teaching concerning “euthanasia,” which is a
Greek word meaning “a good death.”

The Orthodox Church teaches that euthanasia is the deliberate cessation of
human life must be condemned as murder. However, the headlong progress of
medical technology and artificial means of sustaining life requires that Church
moral theologians define the Church approach more precisely, to the problem of
euthanasia and the problematic “right of a person to put an end to his
life.”

To define more precisely, let us say that euthanasia is killing people
painlessly who are hopelessly sick. Advocates point out that contemporary
medicine for the hopelessly sick does not help their recovery but prolongs their
dying. In turn, one must ask it is murder, not to use the good things of
contemporary medicine to prolong the life of the hopelessly ill.

The Church Fathers taught that death is unnatural for man, because man was
created not for death but for life. Along with suffering and illness, Death does
not occurs according to God’s will. The Book of Wisdom says–For God made not
death: neither hath he pleasure in the destruction of the living. For he created
all things, that they might have their being (Wisdom 1:13-14). And in the Book
of the Prophet Ezekiel, we read: For I desire not the death of him that dieth,
saith the Lord God; wherefore, be converted and live (Ezekiel 13:32). 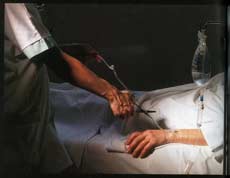 The Holy Fathers taught that the meaning of Adam’s sin is that man, who was
created in the image and likeness of God and infused with breath by His Spirit,
chose death instead of life, chose evil instead of righteousness. And so death
passed upon all men, for that in him [Adam] all have sinned (Romans 5:12), says
the Apostle Paul. And having sinned, man brought death also to his children, who
share his nature and life.

Spiritual life for the Christian is first dying with Christ to sin and the
world and then passing with Him through the experience of bodily death in order
to be resurrected in the Kingdom of God. Christians must transfigure their own
death in the affirmation of life, meeting the tragedy of death with faith in the
Lord and conquering, according to the words of the Apostle Paul, the last enemy
death (I Corinthians 15:26) by the power of one’s faith.

I am the resurrection, and the life: He that believeth in me, though he were
dead, yet shall he live: and whosoever liveth and believeth in me shall never
die (John 11:25-26).

The deeply believing Christian must be ready to accept any death, for his
faith in the Resurrection and in the infinite goodness of God are measured by
his acceptance of death. A Christian is called to have the remembrance of death,
that is, not to forget his mortality, but to remember that the final triumph of
light will appear only after the resurrection of the dead. Preparedness for
death does not mean that earthly life loses its value. On the contrary, it
remains the greatest good, and the Christian is called unto the fullness of the
present life, insofar as he can fill each moment of this life with the light of
Christ’s love.

This patristic description of life and death implies that a Christian is
forbidden to participate in the deliberate cessation of the life of others,
including the lives of the hopelessly ill.

Although the Church suffers together with people in extreme misfortune, the
Church cannot forget her mission to preserve the sacred gift of life. The Church
approves the use of various medicines and even narcotics to decrease the
physical pain of the sufferer. Where death is clear and inescapable, and when
the person is spiritually prepared for death by means of confession and
communion, the Church blesses that person to die, without the interference of
various life-prolonging medical devices and drugs.

The Church tries to instill in the sufferer that his illness is caused by
sin: his own and that of the whole world too. If he bears his sickness
righteously, manfully, and patiently, that is, with faith, hope and even joy,
then he becomes the world=s greatest witness to God’s salvation. Such patience
is the glorification of God amid suffering and sickness. It is the greatest
offering that man can ever make during his life on earth.

All the saints suffered some physical infirmity. Even those who healed others
by their prayers never asked for healing. And the obvious example is Jesus
Himself. For as much then as Christ hath suffered for us in the flesh, teaches
the Apostle Peter in his First Epistle, arm yourselves likewise with the same
mind: for he that hath suffered in the flesh hath ceased from sin; that he no
longer should live the rest of his time in the flesh to the lusts of men, but to
the will of God (I Peter 4:1-2).

According to the grace given us by the Lord, Christians must spiritually
partake of the sufferings of Christ. Inasmuch as the Church blesses the
hopelessly ill person to prepare for death consciously, not resorting to
artificial means of life-support, the Church decisively parts from those who
would call prolong the life of all of the dying by any means. In Her prayers at
the parting of the soul from the body, the Church prays for God to send to the
hopelessly ill a speedy and painless end. The Church teaches that prolonged life
of the hopelessly ill conflicts with God’s planning for that person. One ought
not to generalize. Maintaining the life of the each gravely ill individual needs
a careful and all-round discussion with the relatives of the ill person, his
physician, and spiritual director, together with prayer for God’s guidance.