Source: Eastern Christian Insights
Procopius’ conversion was every bit as shocking as that of St. Paul, who himself had been a strident persecutor of Christians until the Lord appeared to him on the road to Damascus.
Priest Philip LeMasters | 09 July 2018 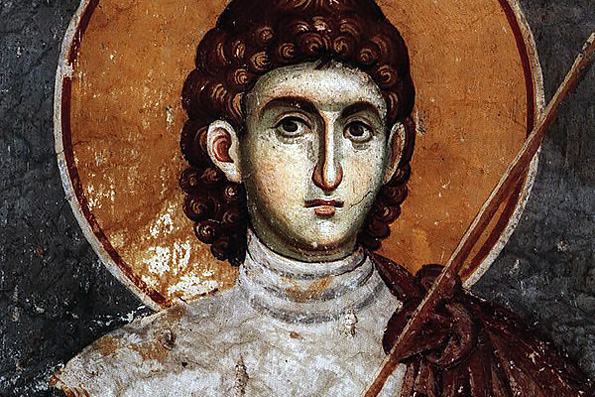 It is tempting to fall into pessimism about ourselves.  We know our own personal failings quite well and often find it difficult to sustain hope for our own healing.  One of the many reasons that the example of the Saints is so important is that they are living proof that there is hope for us all in Jesus Christ. Just as He enabled the paralyzed man in today’s gospel lesson to stand up, carry his bed, and walk home, the Lord can strengthen us for a life that shines with holiness.

We remember today Saint Procopius, a high-ranking Roman officer originally named Neanias who was on his way to persecute Christians when he saw a glowing cross in the sky and heard the Lord say to him, “I am Jesus, the crucified Son of God. By this sign that you saw, conquer your enemies and My peace will be with you.”  Disobeying his military orders, Neanias went with his soldiers to Jerusalem. For confessing Christ and refusing to worship the pagan gods, he endured terrible tortures.  While in prison, the Lord appeared to him again, baptized him, and gave him the name Procopius.  He then taught other prisoners the faith and prepared them for martyrdom; their example drew Procopius’ pagan mother to join them in making the ultimate witness for Christ.  When Procopius himself was brought to the place of execution, he prayed for widows, orphans, the poor, and especially the flourishing of the Church before being beheaded.

It is easy for us to forget how absolutely shocking the transformation of the pagan Roman officer Neanias into the Great Martyr Procopius must have been in that time and place.  He had served the Emperor Diocletian in his ferocious campaign against Christians, whom the Romans saw as traitors because they refused to do their civic duty in worshiping the gods believed to protect the empire.  Then Procopius completely turned his back on the religion and way of life that he had known.  He broke the unjust laws of Rome, abandoned his esteemed military position, and took a path that he knew would lead to torture and execution. He now served a Lord Whom the Romans had crucified as a traitor. Procopius’ conversion was every bit as shocking as that of St. Paul, who himself had been a strident persecutor of Christians until the Lord appeared to him on the road to Damascus.

Like the paralyzed man in today’s gospel reading, Procopius before his conversion had been stuck in a place of profound weakness.  He had been enslaved to blindly following the laws and customs of his society to the point of persecuting the followers of the Lord as hated traitors.  He had been enslaved to idolatry and the fear of death, and lacked the spiritual health necessary to see the cross of Christ as anything but shameful.  But when the Lord appeared to Him, he embraced the strength necessary to conquer his true enemies. He no longer saw his true enemies as alleged opponents of Rome, but as own sins that had wedded him to serving false gods.

When he responded with obedience to the Lord’s command, Christ strengthened him further through baptism in which he died to sin and rose up into a new life of holiness.  The Savior did for Procopius just what He had done for the paralyzed man, forgiving his sins and enabling him to become a shocking witness of the power of His mercy and grace.

Though we often overlook it, Christ has done the same for us all in baptism as He did for the formerly paralyzed man and Procopius.   As St. Paul wrote, “We were therefore buried with Him through baptism into death in order that, just as Christ was raised from the dead through the glory of the Father, we too may live a new life.” (Rom. 6:4)  By putting on Christ like a garment in baptism, we have died to the corruption of sin and been restored to the ancient dignity of those who bear God’s image and likeness.  Our sources of strength as members of Christ’s Body extend to receiving personally the fullness of the Holy Spirit in Chrismation.  In receiving the Eucharist, we are nourished with the Savior’s own Body and Blood to live in communion with Him.  In Confession, Christ Himself forgives our sins and heals the damage we have done to our souls.

The Lord does not call everyone to become a literal martyr or to rise up from being physically paralyzed.  He does, however, call and enable each of us to serve Him as faithfully as we can, given our current state of spiritual health and life circumstances.  That is why St. Paul wrote in today’s epistle reading, “having gifts that differ according to the grace given to us, let us use them.”  We do not all have the same strengths and abilities, and God calls people to serve Him in different ways.  Regardless of the particulars, our common calling is clear:

“Let love be genuine; hate what is evil, hold fast to what is good; love one another with brotherly affection; outdo one another in showing honor. Never flag in zeal, be aglow with the Spirit, and serve the Lord. Rejoice in your hope, be patient in tribulation, be constant in prayer. Contribute to the needs of the saints, practice hospitality. Bless those who persecute you; bless and do not curse them.”

If fulfilling those commands seems beyond your ability today, do not despair. We must never excuse ourselves from living faithfully because we still have lots of room for growth in holiness.  It is a form of pride to insist that we will serve God only on our own terms of imagined perfection.  Perhaps the formerly paralyzed man later stumbled and fell under the weight of his bed or because his legs were not used to walking. What is important is that he still moved forward. The martyrs surely struggled to overcome the natural human fear of torture and death in making the ultimate witness for Christ, but they still died for Him.

And we must take our small, faltering steps toward the healing of our souls as best we presently can, calling humbly upon the Lord to sustain us by His strength and make up what is lacking in our souls.

We will never know His strength, however, if we do not wrestle with our own weakness.  If we abandon prayer because our minds wander, we will never grow in our ability to turn away from distracting thoughts as we stand before the Lord.  If we give up trying to forgive people who have wronged us because of bad memories about them, we will never learn to turn away from obsessing about the wrongs of others.  If we simply accept that we are slaves to our desires for food, sex, money, or the praise of others, we will never grow in our ability to direct our hearts to their ultimate fulfillment in God.  Even when we cannot possibly see how we are making any progress at all in the Christian life, we must do what we are capable of doing to serve the Lord faithfully.  That is how, in our weakness and humility, we may open ourselves to His strength and healing.

There is a reference to St. Procopius in the Orthodox marriage service, in which the bride and groom wear crowns of martyrdom.  That is because he prepared his fellow prisoners to become martyrs.  This reference shows that marriage is to be a witness of mutual fidelity and self-sacrifice as a couple makes their life together an icon of the Kingdom of God.  Even though divorce is common and all marriages have their struggles, husbands and wives may still offer themselves to God and one another in ways that serve as an epiphany of our salvation in Christ.  Divorce, widowhood, and singleness present other very profound opportunities for dying to self and pursuing growth in holiness.

Regardless of marital status or any other circumstances, we may all bear witness in our own lives to Christ’s healing mercy as we die to the power of sin and embrace more fully the new life He has brought to the world. Remembering the holy example of the Great Martyr Procopius, let us all obey the Savior’s command to the paralyzed man to rise, take up our beds, and walk.  That is what He expects of us every day of our lives.