Source: The Christian Post
Samuel Smith | 18 May 2017
WASHINGTON — Evangelical Christians from the United States and other areas of the world are helping "destroy" the historic Antioch Church in Syria by offering poor, vulnerable orthodox Christians aid and assistance if they "convert" and start worshiping at evangelical house churches, a prominent Syrian priest asserted. 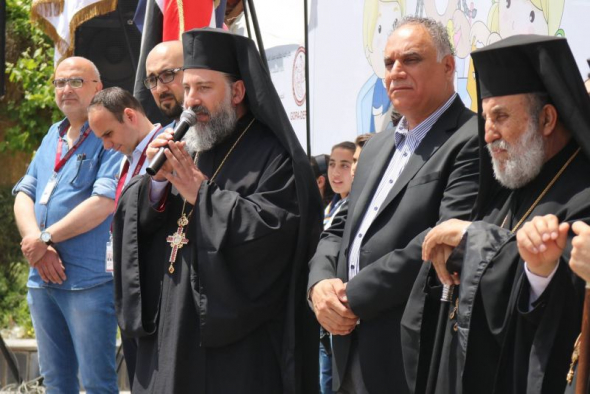 Archimandrite Alexi Chehadeh, the director-general of the Greek Orthodox Patriarchate af Antioch and All the East's Department of Ecumenical Relations and Development, speaks at undisclosed location in the photo posted to Facebook on April 29, 2017. Photo: Photo: Facebook / دائرة العلاقات المسكونية والتنمية)

Archimandrite Alexi Chehadeh, director-general of the Greek Orthodox Church of Antioch’s Department of Ecumenical Relations and Development, traveled from the church’s headquarters in Damascus, Syria, to the U.S. capital last week to take part in the first-ever World Summit in Defense of Persecuted Christians hosted by the Billy Graham Evangelistic Association at the Mayflower Hotel.

Chehadeh sat down with The Christian Post to discuss the situation in Syria and the impact that Christians in the West are having when it comes to aiding the civil war-ridden country’s minority Christian population.

“For us personally, I didn’t see any help from the American church directly. Perhaps, [aid went] to our brothers and sisters in the Protestant Church or Baptist Church or other church denominations we have there. But for us, we didn’t receive any help from the Church in [America],” Chehadeh explained.

As many experts fear that Christianity in the region might one day become extinct, Chehadeh said that instead of helping the ancient Antioch Church and its believers continue to survive and keep their 2,000-year-old Christian traditions alive, some evangelicals from the West and wealthier areas in the Middle East are doing “the opposite” and are coming to Syria to “steal our faithful.”

“[They are] giving them some money to say ‘Come to my church. I will give you money or I will let you go to Europe or to U.S.,'” Chehadeh said. “So it is not a nice way, especially in this crisis, to come and to destroy the work of a church, which is for more than 2,000 years in the area. Now, [Syria] is a place for everybody coming there to do what he or she wants to do because of the economic situation and the lack of income. We really suffer sometimes in some places because of the behavior of some pastors in the evangelical churches and groups.”

Chehadeh was asked to clarify if it is Christians from the United States and all over the world who are trying to use money, aid and assistance to pressure Orthodox Christians to join evangelical churches. He explained that many of the efforts to get Orthodox Christians to “convert” are being supported materially by evangelical groups in the U.S. and other places. However, he said the effort is largely being carried out by pastors from Lebanon or Syria.

“They go to some poor families, convincing them to come to their church. The church is a house or a whatever because they don’t have the tradition and it is easy to receive some money, some assistance,” Chehadeh said. “When you go to someone and you say, ‘I believe in Jesus Christ, you believe in Jesus Christ, so come to my church,’ people in need, they will go there to receive some assistance.”

“For instance, [they will say], ‘Come to my church then you will receive help,'” he continued.

As Syria has been ridden with civil conflict since 2011 and has also had to deal with the rise of the Christian-killing Islamic State terrorist organization over the last three-plus years, Chehadeh was asked whether or not the evangelicals are requiring suffering Orthodox Christians to attend evangelical churches in order to receive the offered aid.

“Mostly,” the priest answered, adding that it happens “quite often” and varies from “area to area.”

Chehadeh was also asked if what the evangelicals are doing in Syria is really helping “destroy” the Antiochian Church.

“Of course,” he replied.

“For instance, we have an Orthodox village, Mhardeh, with 23,000 Orthodox faithful and now we have some evangelical Christians who are working there to let people come to them,” he added. “It’s not nice. I think we have to help each other in a way that we have, or still have, our [traditions and systems] in Syria that are very powerful.”

Chehadeh told CP that he believes what evangelicals are doing to “convert” the Orthodox population in Syria is tantamount to “persecuting Christians.”

“If I am persecuted from somebody outside of the Christian family, I can understand. But I can’t understand that another Christian would persecute me in another way,” he asserted.

Chehadeh explained that he told attendees of the summit on Thursday that if it were not for the Antioch Church, the many other Christian denominations existing today likely wouldn’t be here.

“Christianity came out and was distributed from Antioch to the whole world. St. Paul came to word through Antioch. I cannot understand how somebody nowadays doesn’t support the Antiochian Church. She is the mother church of your congregation.”