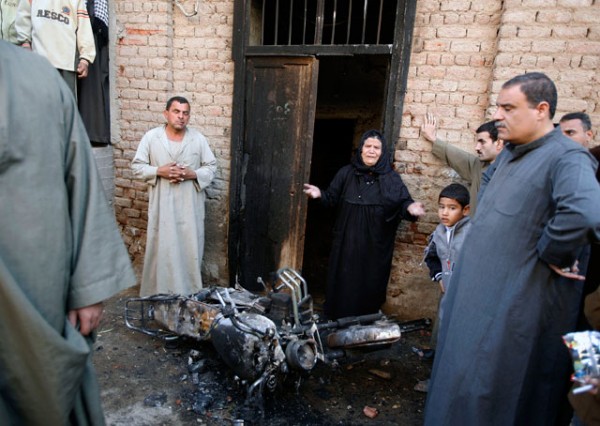 The mob was angry because of a rumor that a building under construction in the village was going to become a church. The Christians in the Al-Beida village currently have to travel four miles away to worship at the Holy Virgin and the Archangel Michael Coptic Orthodox Church.

When the nearby church’s priest, Father Karas Naser, heard of the violence he rushed to the scene. The mob set upon Father Naser’s car when he arrived. However, he was rescued by other moderate Muslims who protected him from the mob and got him out of the car.

Open Doors USA’s Emily Fuentes says this type of violence, while not definitive of the whole country, tends to flare in rural areas where extremists incite some of the villagers against minority Christians.

“It really does vary throughout Egypt. You might see a little bit more tolerance in cities, but in more rural areas or villages like this, you’re going to see a bit more tension, some misunderstanding; especially from neighbors [towards] Christians and what a threat they are as a minority group.”

In that situation, 200 Christian homes were destroyed, and several churches and Christian buildings were looted and burned down. This mob was also incited with an inflammatory rumor against Christians started by the Muslim Brotherhood.

“Through our partner organizations we were able to help rebuild many of these houses, farms, churches so the Christian community could restart again and continue to be a light even after a horrific attack like this.”

Christians make up 10 percent of Egypt’s population, while the other 90 percent is Muslim. Although Christians are a minority and suffer from these flares of violence, they do not respond with violence.

Fuentes says, “These Christians who are not retaliating violently after a mob attack, but really just rebuilding; people are saying, ‘Oh, they’re not as evil as maybe the Muslim Brotherhood or some of these extremists have said.’ So it’s really reshaping stereotypes that many of these neighbors had because they were ignorant of what Christians really were about.

“It is amazing because there are little aspects and different ways that Christians continue to be a light in spite of the persecution that really amazes their neighbors. They’re beaten down, but not destroyed. They remain resilient, they remain a light. They’re not fleeing, and they’re choosing to remain strong in their country.”

The persecution doesn’t always lead to violence, however. Sometimes the discrimination is subtle and still hard on Egyptian believers.

Fuentes says, “Day-to-day life is also very difficult for them. Christian women, often it’ll take several hours for them to be picked up by a public bus because many bus drivers will just ignore them standing on the road. Christian children are often mistreated by their teachers or not given the same opportunities as their Muslim counterparts.”

Another one of Open Doors’ partner ministries provides additional tutoring for kids, and especially Christian kids because of the discrimination they may receive in the classroom.

“We kind of do an after-school program that helps meet where they’re falling behind, and help them get ahead academically. It really stands out to these teachers and they notice, ‘Wow, these are actually some of our greatest scholars and have the strongest work ethic.’”

You can visit Open Doors’ website and sign up for their weekly prayer guide. They have information on Egypt and other countries where Christians face persecution.

Meanwhile, Fuentes shares, “What we’ve really heard from Egyptian Christians is just to be praying for them to be the light of Christ in these situations. It’s so hard not to want to retaliate or just get up and leave. So pray for strength to stand through the persecution they face.”

Pray for the Christians hurt and affected by last week’s attack, that they would find the resources to rebuild, and that the Holy Spirit would give them courageous compassion on their neighbors. Pray for others to come to Christ as a result of the Egyptian Christians’ witness.