The last Gospel of Christ, the Gospel according to John, tells of the Lord’s trial and of His suffering, death, and burial. Over the course of three short years the Lord preached daily. As the Apostle Mark says, He and His closest disciples did not have time to eat bread. He said much and He did much. The Evangelist John reckons that if everything He said and did were recorded, the world would not be able to contain the books written.

Yet, faced with unjust judges, Christ fell silent. Each of the Evangelists writes about this. He answered the high priest once and then said no more. When He was ridiculed, when He was beaten, when He was mocked – He remained silent. When He was led to Pilate, He again replied briefly before falling silent. Why did He – Who earlier had inspired faith and hope, setting alight the people – remain silent here? 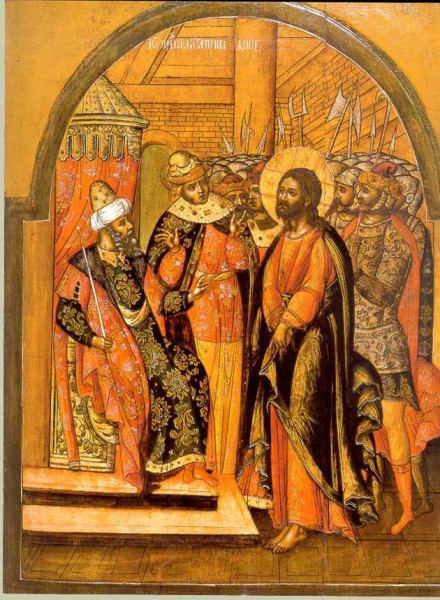 Because He had already said everything. And because the unjust judges would have remained deaf to any of His words or to His defense speech. Therefore He remained silent. At only one time during the trial did He raise His voice in reply to a direct question: Art Thou the Christ, the Son of the Blessed? To which He replied: I am. He then added: and ye shall see the Son of man sitting on the right hand of power, and coming in the clouds of heaven [Mark 14:61-62]. Having said this, He again fell silent. And when He was dying, those standing around the Cross heard only a few words from Him. He suffered and died in silence. How many bitter words He could have found for the ungrateful human race! But He was silent, for He was the God-Man, through Whom the Lord was revealed to us. He said everything, did everything, taught everything, opened the doors – and then was silent. He accepted outrage, ingratitude, scourging, and death.

Is it not the same in our lives? Sometimes it seems to us that the Lord is silent, that He is not responding to our suffering, sorrows, and mournful prayers. In fact, He is listening and does know; He is co-suffering with us now just as He was then, in the days of His suffering. Then, too, when faced with people blinded by envy, hatred, and anger, He was silent, for His heart was tormented for them: for their fall, for their sin, for their blindness. It would seem that today, too, He suffers for us silently. We call out to Him, yet we should not think that this Divine silence equals indifference, or that He, as we say, “cannot hear.” He cannot but hear. It is simply that, as then, He has already told us everything. He has said more than can be fit into the world and into our hearts. He has showed us the road of life. Now He silently awaits the movement of the hearts and wills of each one of us.

And just as then, when He broke His silence and spoke about the Son of Man coming to judge the living and the dead, so now does the Lord say to us: “Yes, He is long-suffering; He silently suffers our sins, our baseness, our lack of faith, and all unworthiness – but not endlessly. A time will come when all will be weighed by God’s righteousness.” For us, the silence from the Cross is both a reproach and a call to true Christian life. The most important thing for us is encouragement, for we know that the Silent One on the Cross, the Silent One in heaven, is indeed the One Who saves us. He has neither forgotten us nor left us.

He alone is our only hope.

Golgotha.  What is the Purpose of Christ’s Death on the Cross?