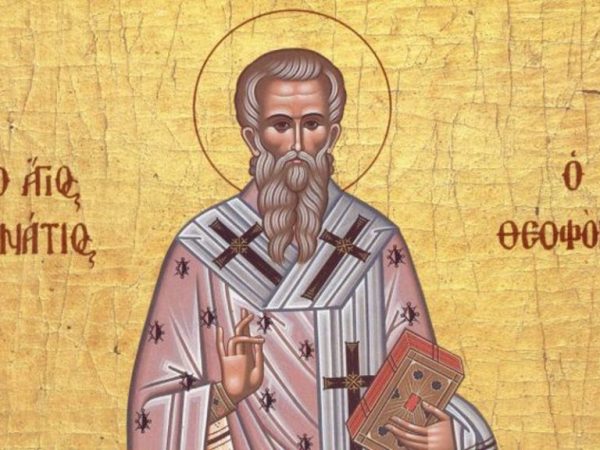 On January 2 (December 20), the Holy Orthodox Church celebrates the memory of the Hieromartyr Ignatius the God-bearer of Antioch. According to the Tradition of the Church, Our Lord Jesus Christ placed Ignatius – then a young boy – on his lap when he said: “Therefore whoever humbles himself as this little child is the greatest in the kingdom of heaven. Whoever receives one little child like this in My name receives Me.” Furthermore, St. Ignatius was a disciple of St. John the Theologian and was the second bishop to succeed the Holy Apostle Peter to the episcopal throne of Antioch.

Our Antiochian Patriarchate and our Archdiocese rightly laud St. Ignatius as one of the brightest lights in our history, and he is the heavenly patron of the philanthropic arm of our Archdiocese, the Order of St. Ignatius. In St. Ignatius, we have the witness of one who was borne in the very arms of the Son and Word of God, learned the mystical teachings of the faith from the apostle known as The Theologian, and received his archpastoral authority from the Chief of the Apostles. As an inestimable inheritance, he left us seven epistles, penned as he traveled from Antioch to Rome to be martyred for the Faith.

The letters of St. Ignatius teach a profound theology about the person of Christ, showing that the proclamations of the Ecumenical Councils were taught clearly by the Holy Apostles and their immediate successors. For our day and age, they also teach something equally as profound about the nature of discipleship and humanity. Much of what poses as “Christian” in our contemporary western culture has been termed by recent scholars as “moralistic therapeutic deism” – summed up as the aim of Christian life being self-fulfillment and worldly happiness.

St. Ignatius, in contrast, wrote to the Roman Christians and pleaded with them not to attempt to free him from his imprisonment and impending martyrdom: “Now is the moment I am beginning to be a disciple. May nothing seen or unseen begrudge me making my way to Jesus Christ. Come fire, cross, battling with wild beasts, wrenching of bones, mangling of limbs, crushing of my whole body, cruel tortures of the devil — only let me get to Jesus Christ!”

St. Ignatius, one who had known Christ as a child and served the Church alongside the Apostles themselves, writes that he was only then beginning to be a disciple. He was teaching that true discipleship is not being faithful in a transactional relationship with God – we follow the rules of the Church to receive worldly blessings – but following Christ in taking up our crosses. True discipleship comes from our embracing suffering through love, self-sacrifice, kindness, forgiveness, generosity, and at times confession and martyrdom.

Later in the same letter, he adds: “Do not stand in the way of my coming to life — do not wish death on me. Do not give back to the world one who wants to be God’s; do not trick him with material things. Let me get into the clear light and manhood will be mine. Let me imitate the Passion of my God. If anyone has Him in him, let him appreciate what I am longing for, and sympathize with me, realizing what I am going through.”

Here, St. Ignatius is pleading with them to allow his martyrdom because in martyrdom manhood will be mine. In other words, the only true human being was Jesus Christ, perfect God and perfect Man. St. Ignatius teaches that by suffering a martyric death as Christ did, he will also fully become a human being. He sees the life of this world as death, and martyrdom as truly living – therefore he shockingly states that attempting to save him from his martyrdom is actually wishing death on him!

We do not share these words in a morbid way to focus on St. Ignatius’ violent martyric death or to seek out one for ourselves. We read these words of St. Ignatius to understand that true discipleship and true humanity should always be seen in the light of the Cross of Christ. Fr. Thomas Hopko often said that “Orthodoxy is paradoxy” and pointed out that in the Scriptures, one is only exalted by being humble, made rich by being poor, and living by dying to oneself. In the circumstances of our own life, we can find many, many ways in which we can be martyrs, witnesses of true discipleship and true humanity.

Let us reflect in these closing days of the fast, that Christ was not born in the cave and laid in a manger to bring us worldly happiness but to restore to humanity the image and likeness that was marred by the fall. Christ welcomes our participation in divine life through following Him to the Cross – as we see foreshadowed in the halo of the God-Man, swaddled in what look like grave clothes as He rests in a cave not unlike the one He rested in for three days before His Resurrection. ​