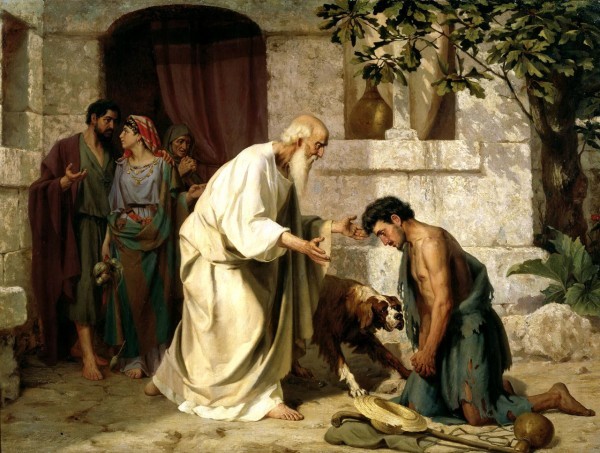 O good Father, I have withdrawn from Thee. Do not forsake me or cast me from Thy kingdom. The most evil enemy hath stripped me naked and robbed me of my fortune; and I have wasted the gifts of the soul in riotous living. Wherefore, I will rise and return to Thee, crying: Make me as one of Thy hired servants, O Thou who for my sake did stretch Thy pure hands on the Cross to snatch me from the wicked beast and clothe me with the first robe, since Thou alone art most compassionate. Doxastikon of the Praises

On the second Sunday of the Triodion, the Holy Orthodox Church reflects on the parable of the Prodigal Son. The Lord describes two sons: the oldest is obedient to his father and the younger is restless and desirous of leaving home to go on his own. This younger son, in a stunning act of brazen self-centeredness, asks for his inheritance from his father – who is still alive! His father responds with love, and gives his son the inheritance and the freedom to chase after his whims and desires. After moving to a far country and throwing away the fortune in profligate living, a famine arises. All of the friends that previously enjoyed themselves with the son abandon him when the money runs out. The only work the son can secure for himself is feeding swine, and in his hunger, he desires to eat their pods for his own food.

The Lord says the son then “came to himself” and realized the low estate he had come to – not only was he spending his time in mud and feeding swine, he was hungry enough to dine with them! He longed for the bread of the servants in his father’s house. He decided to return to the father and to plead to be accepted, not as a son, but as a servant. The Lord describes the father running to the son when he sees him still off at a distance, then embracing and kissing him. When the son humbly asked to be received as a servant, the father calls for him to be given a robe to clothe his body, a ring to adorn his finger, and shoes to shod his feet. He commands the fatted calf to be slain and for there to be a great feast in celebration.

This parable profoundly shows both the sinfulness of humanity and the mercy of God. Our good and loving Father grants us freedom to enter into communion with Him through the life of the Church. He endows us with spiritual gifts – the ability to love, to reason, to create, to heal, etc. We tend to misuse the gifts in our own versions of “riotous living” – dulling ourselves with shameful entertainments, gorging ourselves on food drink, chasing after worldly honors, destroying others to fulfill our ambitions, holding grudges, neglecting the poor, etc. Like the prodigal son, we can lose the awareness that we have departed from the Fathers’ house because we grow accustomed to our sinful habits and evil company.

The Church gives us this holy time to “come to ourselves” – to realize with humility that we are in the proverbial mud with the swine, to remember the grace-filled life of our Father’s House and to hunger for the Bread of Life that is eaten therein. This is the time where we say to our Good Father: “I will rise up and return to Thee crying, ‘Make me as one of Thy hired servants.'” When we approach God with this humble repentance, how does He respond? St. John of Kronstadt, in his homily discussing this parable, beautifully encourages us:

Have you sinned? Say in your heart with full determination, I will arise and go to my Father, and in fact, go to Him. And just as you manage to say these words in your heart; just as you decide firmly to live according to His will, He will immediately see that you are returning to Him. He is always not far from every one of us (Acts 17:27), and will immediately pour His peace into your heart.

As we saw last week, the publican was forgiven his great sins by humbly beating his breast and asking for mercy. This week, we see the prodigal receiving forgiveness from his father for returning in humility to be received as a servant. With these examples in mind, we do not despair as we come to a realization of our sinfulness, for we see that the moment we sincerely turn our hearts to God, He comes to us to forgive us and to give us His divine grace that we may reorient our lives back to Him. We are restored as children of our Father. We regain blessed communion with Him, peace with our brethren and with our conscience. We receive back our joy.

St. Theophylact, in his commentary, ascribes allegorical meanings to the robe, the ring, and the shoes the Father gives His repentant and restored children. He explains that robe is our Baptism and the putting on of Christ Himself – “As many as have been baptized into Christ have put on Christ.” He then describes the ring as our Chrismation and points out that it is placed on our hand as the “symbol of action” so that we might “execute good deeds in His Name.” Finally, he teaches that the shoes are a protection against the spiritual “scorpions” that are the “seemingly small” sins and the “serpents” that are “those sins which can be seen by all.”

What then is meant by the feast and the fatted calf? St. Theophylact explains that Our Lord, Jesus Christ, is the slain calf and the feast is the Divine Liturgy. When we are restored as the children of the Good Father, He offers us the flesh and blood of His Son, who, in the words of the Canon of Preparation for Communion, is “ever slain sanctifying those who partake of Him.” Having partaken of this feast of the Mystical Supper, St. Theophylact says of the restored son: “Then he becomes a source of gladness to the Father, and also to His servants, namely, the angels and the priests, because he who was dead is alive again, and he who was lost is found.”

Similar to the week prior, this parable about repentance is also a warning to those who consider themselves righteous before the Lord and judge others. The elder son, who stayed by his father’s side, returns from the fields to find the celebration of the household upon his brother’s return. He does not share in the joy of his father and the servants. He is resentful and complains that his loyalty was not rewarded with a feast with his friends. He refused to recognize his kinship with his brother, referring to him as “this son of yours.”

Just we placed ourselves into the humble position of the Publican this past week by not keeping our twice-a-week fast, let us use this week to reflect on the ways in which we are like the Prodigal Son, living in the mire of our sinful condition and feeding the swine that are our passions. When we see our brethren coming to repent over these next weeks, let us flee from the example of the elder brother and welcome them joyfully as our brothers and sisters in the house of our Father. As we continue our journey to Great Lent, let us cultivate humble hearts that seek God’s forgiveness and extend our forgiveness to others that our coming fast will be pleasing to God and for the salvation of our souls. ​