A Family of Native Inhabitants Embraces Orthodoxy in Taiwan

Source: Pravoslavie.ru
Natalya Mihailova | 03 August 2014
On July 26, the day before the Synaxis of the Holy Fathers of the first Six Ecumenical Councils, the rector of the Dependency of the Russian Orthodox Church in Taiwan, Priest Kirill Shkarbul, baptized five native Taiwanese people. 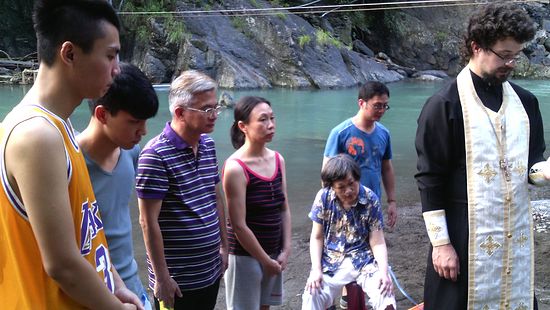 The baptism was performed in a mountain river near the settlement Wulai, not far from Taipei, reports Sedmitza.ru with reference to the News Service of the Dependency of the Russian Orthodox Church in Taiwan.

Before receiving the Holy Sacrament of Baptism, the Taiwanese people went through six months of preparation, attending catechism courses at the Dependency. Two of them had been sect members in the past, and three others were pagans. On hearing about Orthodoxy, they wished to get to know it better, and, finding the truth in Christ, expressed their desire to receive Holy Baptism. The sacrament was performed in Chinese.

By tradition, baptism at the Russian Church’s Dependency in Taiwan is performed in mountain rivers – in running water, sometimes in the ocean. Many Protestants and Catholics note with considerable interest and respect that the Orthodox Church conducts sacraments in full accordance with the canons of the Ancient Church.