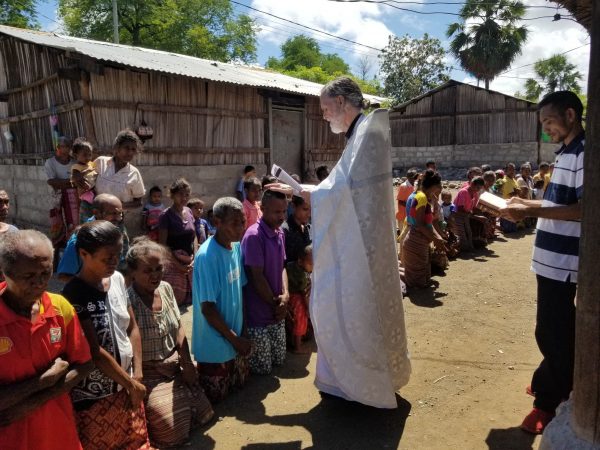 Timor Leste, is a small country of 1.2 million occupying half the island of Timor. While Timor West is predominantly Muslim and has made headlines in recent years for the aggressive attacks on its Christian minority population, Timor Leste is predominantly Catholic. This is due to its history of colonization under the Portuguese. In fact, it has only recently gained independence from Portugal 1975 and even more recently 2002 from Indonesia, which still governs a large part of its borders. In the last couple of years, however, the Catholic population of Timor Leste has experienced a great awakening for Orthodoxy. Since 2017, thousands have converted to Russian Orthodoxy.

Father Fotie, an ordained ROCOR priest from Jordanville who shepherds a tiny parish in upstate New York, has been instrumental in bringing many Timor Leste Catholics into the fold. He has thus far made two missionary attempts, each time chrismating a couple of hundred to the faith. This is unexpected in a country that has been historically 90% Catholic. Father Fotie attributes the conversions to the “might power of Grace in the Orthodox Church as the one true faith.”

Father Kirill Shkarbul, a Russian Orthodox priest serving in Taiwan, began the Orthodox Mission in Timor Leste only three years ago. Over his several visits he was able to chrismate 160 faithful. It was he who invited Father Fotie to help with the effort. “Our hope,” explains Father Fotie, “was that a sufficient nucleus could be gathered there to form the work into a mission under the Russian Orthodox Church.”

Father Fotie’s most recent trip occurred in February of this year, just before the break of the COVID pandemic. The missionary work in Timor Leste had begun under the blessing of Metropolitan Hilarion. This opportunity arose as a result of Father Kirill Shkarbul’s initial invitation to officiate for the Blessed Nativity service on January 7th. From February 2019,  Father Kirill visited Timor-Leste a total of four times with each visit lasting on average between 14 to 20 days.  When he was not there, he sent four different lay missionaries to the island for follow-up work.

Father Fotie recounts that his efforts to covert the faithful of Timor Leste did not come without struggle. But for each obstacle, God provided a passage. One of these was financial as an expedition into one of the villages, Oekusse, where many waited for conversion required the rental of a 4-wheel drive vehicle to negotiate the back roads of the mountainous region. A shortfall of $100 was all that kept father and his translator from heading into the hills. It so happened on the evening before the mission, Father was contacted by an Orthodox catechumen who he had visited in the hospital while in New York. This catechumen had taken a keen interest in the mission for Timor-Leste. This individual rendered the necessary $100 as he had been released from the hospital the day before.

Another obstacle involved the conflict between two members of the mission who were on very bad terms. When the head of the mission learned that Father Fotie had given medicine to the rival’s wife, he threatened to opt out. With patience and a bit of peacebuilding, the two were reconciled and both participated in the effort.

A final obstacle involved getting through the border of Indonesia. Timor-Este and Timor-West are managed by a thin sliver of border belonging to Indonesia. In order to get to one side or the other, one has to pass through Indonesian border control. By the time Father Fotie and the mission team in a 4X4 reached the crossing, it had closed more than an hour earlier. They had no more money to stay another day. Nevertheless, one small crack of opportunity remained, and that was the literal space through which the border patrol workers passed to go home.  As Father Fotie narrates:

Through this space we entered to state our case.  While doing so, I was astonished to see how many of these Indonesian border patrol workers came up to me to ask for my blessing (Indonesia is a heavily Islamic nation).  Finally, it was agreed that they would try to get “the big boss” to return to the border crossing to see if there was anything that could be done for us.  In the meantime, I asked the true Big Boss, for His mercy, help and grace! For me, when I saw those gates a couple of hours later electronically open to let us through, I was hard pressed to think of a greater miracle than that!

What accounts for the entrance into the Orthodox faith? A translator and former professor at the University of Timor Leste, who also converted to Orthodoxy, noted that while there were several different protestant churches and other religions working to build missions in Timor-Leste, none had taken root like the Orthodox one. Father Fotie attributes this on the one hand to the dissatisfaction with the Catholic Church, but on the other hand, to the Grace present in the Eastern Orthodox Church. “So many that I met were so hungry and eager to have a living encounter with God which they experienced in Orthodoxy,” Father explains.

As a result, the Church in Timor-Leste has now grown from 160 to 385 new faithful. Metropolitan Sergei of Singapore, a clerical envoy of His Eminence Patriarch Kirill of Moscow, has officially petitioned the Patriarch to receive the mission into the Russian Orthodox Church.

My fate brought me to Mexico City during Holy Week of 2019.  Feeling a bit guilty that I…