Source: Gladsome Light Dialogues – An Orthodox Blog
Fr. Vasile Tudora | 15 June 2020
The Apostles’ Fast begins today, on the second Monday after Pentecost (the day after All Saints’ Sunday), and continues until the Feast of Saints Peter and Paul on July 12 (Julian Calendar). 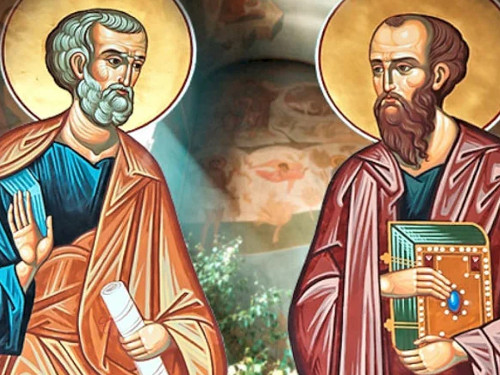 The idea that any Westerner has about fasting is strongly linked with renunciation‚ with giving-up‚ with sacrificing something for God. In the Eastern Orthodox Church however‚ fasting achieves a much richer meaning. Fasting is not only about giving-up‚ but it is actually more about gaining‚ about being able to reach things that are possible only through this spiritual exercise.

In a legalistic understanding of salvation some believe that Christ has come on earth to fulfill a duty‚ to repair an offense that man has brought unto God. His sacrifice on the Cross satisfies this need and mankind enters again in God’s favors. From this perspective fasting is a similar symbol: a personal sacrifice that one makes to step back into God’s grace. This can be anything ranging from giving up chocolate to abstaining from Facebook for the Lenten period. But such frivolous renunciations really don’t cut it into the genuine meaning of fasting.  God doesn’t need any of these sacrifices as He does not need the whole burnt offering of the Old Testament anymore. It is us‚ not God‚ who need the fasting rule.

Reducing the fasting to a symbol‚ to a mere idea of fasting‚ the entire exercise of a fast is perverted. Fasting becomes a theoretical notion that can be achieved through an act that involves little or no effort because‚ at the end‚ is not the fasting that is important‚ but only the idea of fasting.  This intellectual reduction is yet another symptom of our brokenness‚ of the ontological separation between mind and heart. The mind creates an entire new reality that we confuse many times with the true authenticity of existence that only a heart open to God can see.

In this world‚ made-up by our minds saturated with secular values‚ the importance of the complete involvement of the body in fasting is forgotten‚ because for the mind a symbol is enough. But man does not exist in a fantasy of the mind‚ but lives in the real world‚ as a true person‚ body and soul‚ both physical and spiritual.

Christ came to save the world not by spreading only the idea of salvation‚ but coming down Himself‚ taking body from the Virgin Mary and physically becoming one of us; not a ghost‚ not a spirit‚ but flesh and bones. His death on the cross was not a symbol‚ but a painful reality. His resurrection was not a simple story full of morality‚ but the defining moment of a new stage in human existence. By reducing everything to symbols we end up living in our minds and missing genuine life.

In the Orthodox understanding man is utterly aware that living in a physical world‚ with a corrupted and fallen nature‚ the body is subject to passions that affect the state of his entire being. Controlling the body through fasting directs the entire human being towards God‚ because “a body subdued by fasting brings the human spirit freedom‚ strength‚ sobriety‚ purity‚ and keen discernment.” (St. Ignatiy Brianchaninov). In a paradoxical way by starving the body the entire human being is nourished spiritually and is able to “ascend on high‚ to contemplate lofty things and to put the heavenly higher than the pleasant and pleasurable things of life.” (St. John Chrysostom).

We don’t want however to reduce the experience of fasting to a mere vegetarian diet. Fasting is a period of total transformation‚ of metanoia‚ as the Greek fathers call it.  The faster should strive to change his or hers entire way of life‚ redirecting priorities‚ seeking new avenues to God‚ striving for perfection in Christ. As St. Basil the Great says “True fasting lies in rejecting evil‚ holding one’s tongue‚ suppressing one’s hatred‚ and banishing one’s lust‚ evil words‚ lying‚ and betrayal of vows.”

From this perspective we can truly say‚ paraphrasing St. John Chrysostom‚ that fasting of the body is a feast for the soul. A soul liberated from the weight of an overfed body and nourished with the manna of virtues can reach into the spiritual heights‚ free of the passions that drag it to the ground. Such a soul can pray more‚ can forgive more‚ can love more. Fasting is not a simple renunciation but an exercise of love‚ as salvation is not an honor satisfying sacrifice but the greatest act of love ever seen.