The Firmament of Grace: the Principle of Hospitality 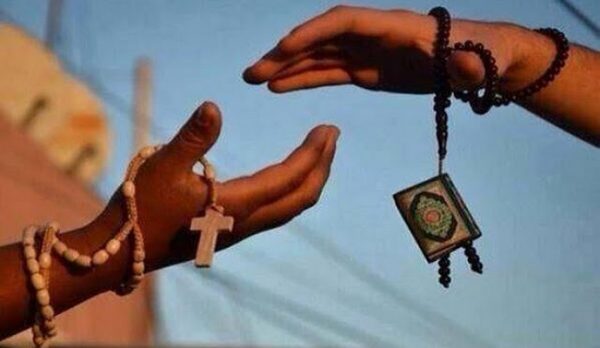 Every Friday afternoon in the prison where I work, I make the Chapel available for Muslim inmates to conduct their Jumah prayers. I arrange the space so that it is suitable for them, including moving the altar table to one side and covering the Cross that stands on it. I clear a space and orient the floor rugs towards Mecca. I put on coffee and set out cookies, creamer and sweetener. I also print off the sermon emailed from the Imam, and make copies, which I leave on the table for the inmates to read. 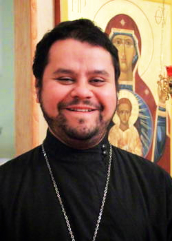 During one such recent Jumah prayer event, I was doing what I usually do—bustling around, refilling coffee, creamers and sweeteners—when I overheard one Muslim fellow say to another, “Now that’s a real man of God.”

I won’t lie: it was a gratifying moment. I share it with you, however, not to draw attention to myself, but to address a question that persons of faith often ask: how do we interact with the ‘other’ in the secular public square of the 21st century in a way that evinces such respect?

As is frequently true for me, the context of prison chaplaincy in a multifaith, secular institution throws the questions of our broader society into a sharper relief; it also points more clearly to answers to those questions. For instance, the Chapel space itself is understood, not just as ‘neutral,’ but as a space that is hospitable to those of all faiths or none. This view typifies a larger trend of at least some kinds of secularism in western society, which views the public space as an opportunity for all religious views to have a ‘seat at the table,’ and engage in discourse and dialogue on respectful terms.

Such a view poses a challenge for some. Two of the largest faiths in the world—Islam and Christianity—assert (in their traditional forms at least) that their faith is exclusive, that is, that it is a complete and perfect expression of reality and truth. They also contain the imperative to promote and spread that vision of reality and truth to others. Their goal, then, is to ‘compel’ (in some sense) others to join their faith.

The question is, how can adherents of Christianity or Islam fulfill this promotional, proselytizing imperative when the space where persons of various faiths (or no faith) interact—whether in a prison context or in the wider public—are to be understood as ‘level playing fields’ characterized by respect for the other?

I cannot speak for how Muslims might answer this question, though I do know that the meaning of jihad (that principle of defense and promotion of the faith) continues to be a matter of debate and dispute among Muslim scholars and lay persons. I can only speak from an Eastern Orthodox Christian viewpoint. I would argue that hospitality is the first and most important way to fulfill Christianity’s imperative to ‘compel’ others to join the feast of the Kingdom.

What is hospitality? Based on my pastoral experience, I would see it is as a commitment to allow others to express and practice their beliefs as completely and unrestrictedly as possible. To move beyond this and towards a theological definition, hospitality is the act of establishing and preserving a ‘firmament of grace’ in which the other can embody his or her otherness in perfect, non-coercive freedom.

In the act of creating the world, God establishes ‘firmaments’ (Genesis 1:6-8) within which each of His creatures can multiply and live freely ‘according to its kind,’ (Genesis 1:11-12, 21, 25) that is, with integrity, having the freedom to exercise and fulfill their natures. When human beings disobey Him and cease to live according to their nature, God temporarily breaches that firmament (Genesis 7:11), but then closes the breach, repairing the firmaments (Genesis 8:2). He makes a covenant to preserve the space in which human beings can continue to live according to the freedom of their wills, even if their wills lead them to disobey Him and follow a path contrary to His will. (Genesis 8:21)

Why does God maintain the firmaments despite human disobedience and sin? If the firmaments are breached, sin may be eradicated, but human beings are no longer able to choose to love God in any meaningful sense. Without the firmaments in place, human beings exist in a coerced state, that is, deprived of freedom. God is love, and His love expresses itself for another, that is us, His creatures, but that love can only be perfected if its objects are truly other. As long human beings exist in a coerced state, they are not truly other, living according to their kind, but merely extensions of God being. The firmaments, therefore, are an integral part of the perfection of God’s love for His creation.

Of course, our underlying hypothesis in discussing the love of God for His creation is the Son and Word of God, Jesus Christ. The declaration that ‘God is love’ must be understood in the light of the Incarnation, in which God’s love is the perfect depths of His self-emptying service and death for His creatures. (Phil. 2:7) But this love is made absolute and perfect by Jesus’ absolute otherness from humanity, his equality with God, whose ways are far above ours as the heavens from the earth. (Isaiah 55:9) And since God cannot truly serve and die for that which is merely an extension of Himself, the complete humanity of Jesus, united unconfusedly with His complete divinity, is the epitome of God’s love.

In this light, the firmaments of creation may be understood as a type of the line of ‘unconfusion’ between the divinity and humanity in the person of Christ. For, even as God unites Himself to human nature, He is committed to preserving the integrity and freedom of that nature, allowing for its potential perfection and completion in freedom. The firmaments described in the book of Genesis are fulfilled in the firmament of grace: God’s self-constraint in allowing for the full humanity of Christ, and by extension of all human beings, to exercise their wills and choose Him freely without being coerced.

These abstract theological reflections have concrete implications for us, in that those united to Christ are committed to incarnating God’s love in relation to the other. “It is no longer I that live, but Christ who lives in me.” (Gal. 2:20) And just as Jesus Christ epitomizes God’s love by the inseparable but unconfused union of his divine and human natures, we in our entirely human nature are committed to embodying the divine-human union of Jesus’ two natures through our relationships with other human persons.

As in the divine-human union that is the Person of Jesus, our relationships with others must be inseparable. We are obligated to a union with the other; we are our brother’s keeper, regardless of how alien he is to us culturally, theologically or ideologically. We are committed, not merely by choice, but by our very nature as Christians to a brotherhood with those whom we might consider outsiders, and even alien to us. Thus interfaith dialogues, conversations, relationships are essential to Christian life.

At the same, those relationships must also be unconfused in that we must allow those others to be wholly other from us without coercion, even if they subsequently choose to become less, not more, human in our eyes. For only when we make such an allowance can there be a potential for them to choose to become more, rather than less, human. However, such a movement is only meaningful under the firmament of grace, our self-constraint in relating to them that allows for both repentance and rejection.

Of course, allowing others to be fully other is also our commitment to maintain our otherness from them. Giving them total freedom to turn away or turn towards in no way implies that we must be ‘neutral’ about their choices, thus compromising the integrity of our beliefs. Indeed, an unconfused union with others requires us to affirm what clearly distinguishes us from them, and even (when necessary) to assert our ‘rightness’ against their ‘wrongness.’ The commitment to an unconfused union with others is simply allowing them the freedom to choose error, and ‘taking the form of a servant’ even as they do so, in the hope that they might see our love and choose just as freely the truth we embody.

This allowance, this firmament of grace under which others can do rightly or wrongly, is the heart of hospitality. And it is hospitality alone that makes the Christian faith inviting and compelling to outsiders. For when we allow them to be wholly other (even if that means them being entirely wrong), we epitomize the love that inseparably united the unapproachable God to a fallen human life, even as He remained unapproachably other in divinity. And that divine love itself is what draws the souls of our neighbours into union with God far more compellingly than any coercive proselytism could do.

This, I believe, is the meaning of the inmate’s comment that Friday afternoon in my prison Chapel: “That’s a real man of God.” When he saw an Orthodox Christian working to ensure that others could practice a faith that was completely alien to his, he understood on some level the nature of divine love, which is essentially hospitable. It establishes the firmament of grace under which we have the freedom to become strangers and sojourners, alien to God. And then it goes into the highways and byways, to serve and gives its life, that its love might call us to return and join the banquet of the children of the Kingdom.