Source: Basilica.ro
A joyful event marked the first day of school in Lovech, Bulgaria last Monday, as the Orthodox Church opened its first school in the country.
Gheorghe Anghel | 25 September 2019 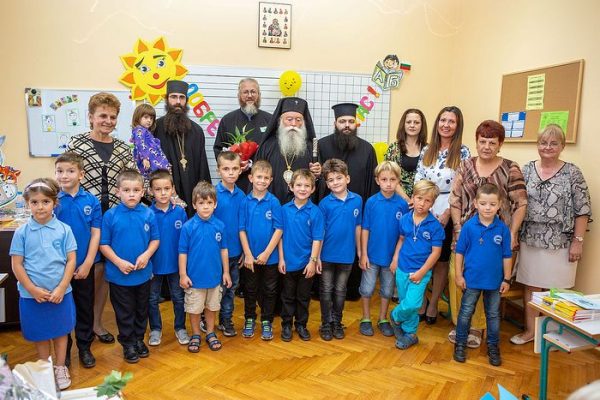 The moleben for the beginning of the school year with the blessing of water at Seven Saints Elementary School was celebrated by His Eminence Metropolitan Gabriel of Lovech, reports predanie.bg.

The school is so named because the Church has placed it under the spiritual patronage of seven great missionary saints closely associated with writing and education in Bulgaria: the missionaries to the Slavs the Equal-to-the-Apostles Sts. Cyril and Methodius, and their disciples Clement, Naum, Sava, Gorazd and Angelarius.

Met. Gabriel addressed the teachers, students, and public officials gathered for the joyous event, noting that the day marked the fulfillment of many years of labor.

“Why did we take such a step?” His Eminence asked, answering: “Because by tradition, the Bulgarian school taught, but also brought up in the spirit of Christ’s faith. We want to help children grow and live in joy, hope, and love, and be useful to people and their homeland; not having among them violence and addictions to alcohol, drugs and other vices; to teach them the faith in God, to love people, to be hardworking and compassionate.”

He also explained that the seven patrons were chosen because, “For Bulgaria and for the Slavic world they are an eternal, unfading and supreme example of teachers and pedagogues who, with their holiness and high education, have created a whole galaxy of worthy disciples. They succeeded in enlightening the pagan people in Divine morality and the Christian faith.”

Greetings from His Beatitude Patriarch Neofit of Bulgaria were also read out, wishing God’s blessing upon everyone involved with the school.

Welcoming words were also offered by the mayor of Lovech and other public officials, after which the students headed for their classrooms accompanied by the first ringing of the school bell.

In related news, the Metropolis of Cluj, Maramures, and Salaj of the Romanian Orthodox Church has begun renovations towards opening a new social-educational center in Bistriţa. The center will initially provide primary and secondary education, with an aim to eventually function as a high school as well, reports the Basilica News Agency.