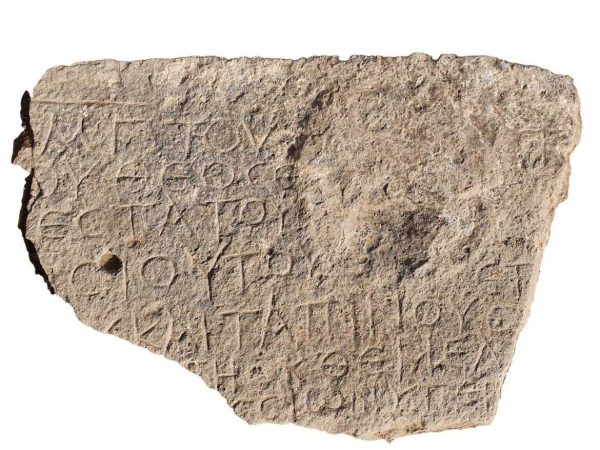 The archaeologists discovered the inscription engraved at the entrance of an impressive building from the Byzantine or early Islamic period, featuring mosaic pavements decorated with a geometric design.

The finding was unveiled in a salvage excavation directed by Tzachi Lang and Kojan Haku ahead of the construction of a road inside the village of Taiba in the Jezreel Valley.

“We did not know what to expect ahead of the work, but we knew that this was an area where archaeological remains had been found. When we came across the inscription, we knew we had a church,” Antiquities Authority (IAA) archaeologist Yardenna Alexandre told The Jerusalem Post.

“Christ born of Mary. This work of the most God-fearing and pious bishop [Theodo]sius and the miserable Th[omas] was built from the foundation. Whoever enters should pray for them,” reads the full inscription, according to Dr. Leah Di Segni, researcher at the Institute of Archaeology of the Hebrew University of Jerusalem.

“The inscription greets those who enter and blesses them. It is therefore clear that the building is a church, and not a monastery – churches greeted believers at their entrance, while monasteries tended not to do this,” Di Segni commented in a press release.

The words “Christ born of Mary” were widely used at the beginning of documents or other forms of text, serving as a blessing and protection from evil.

“As a blessing, the inscription must have originally stood at the entrance of the church, where people could see it. However, it was now found incorporated in the walls, therefore we know that the stone was reused as construction material. Likely the building collapsed and was rebuilt,” Alexandre pointed out.

The region of the Jezreel Valley bears many testimonies of the ancient Christian life.

Most viewed articles
Seven Lessons for the New Year from St. Seraphim of Sarov208
The Perfectionist113
New Jersey Governor Signs Bill Legalizing Abortion Up To Moment of Birth91
The Way of Christ Is The Way of Love57
140th anniversary of repose of St Antipas the Athonite of Calapodești celebrated in Roman56
Metropolitan Hilarion Celebrates the 20th Anniversary of His Episcopal Consecration53
A Great Time to Join the Orthodox Church20
1
Sunday of the Samaritan Woman1
How We Worship: the Struggle of the American Experience1
Most popular authors
Priest Luke A. Veronis208
Protopresbyter Themistoklis Mourtzanos113
Ryan Foley91
Fr. Theodore Stylianopoulos57
Aurelian Iftimiu56
Pravmir.com team53
Frederica Matthewes-Green20