Source: Basilica.ro
The mosaic crucifix showing Christ flanked by Virgin Mary and Saint John the Theologian is ready to be applied above the iconostasis of the National Cathedral in Bucharest.
Aurelian Iftimiu | 18 July 2019 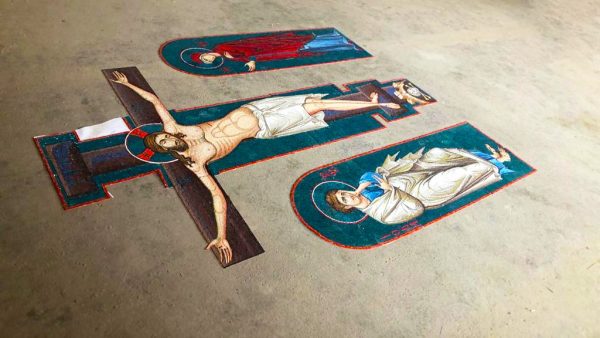 The five-metre mosaic cross was initially painted by the team of artists coordinated by iconographer Daniel Codrescu.

The cross that will tower over the Cathedral’s 18-metre unique iconostasis was inspired by Byzantine iconography and Moldavian church painting.

Codrescu said that other sources of inspiration were the paintings at Studenica Monastery, Moldovita Monastery, and Cimabue and Giotto’s crucifixes.

The artists are now preparing the mosaics that will be applied on the Cathedral’s main dome (Pantocrator) and the half-dome above the altar.

The largest mosaic depicting the More Spacious than the Heavens Icon of the Mother of God was applied on the half-dome that stands above the altar in May.

The altar walls will have various representations of Old Testament prophets, symbols such as the Ark of the Covenant, the Communion of the Apostles, and other biblical scenes.

The entire mosaic work of the Romanian People’s Salvation Cathedral is rooted in the hesychast tradition and in the old Byzantine and post-Byzantine art, while being in consonance with the architectural space and the needs of the contemporary Orthodox sacramental rituals.

In May 2019, Pope Francis had the chance to visit the Cathedral and pray the Our Father inside.

Although yet unfinished, Romania’s National Cathedral has become a tourist attraction and stands as the largest monument ever built honouring all time heroes who died for national and religious freedom in Romania.