In Pictures: The Making of the Giant Platytera Mother of God Mosaic Icon at Romania’s National Cathedral 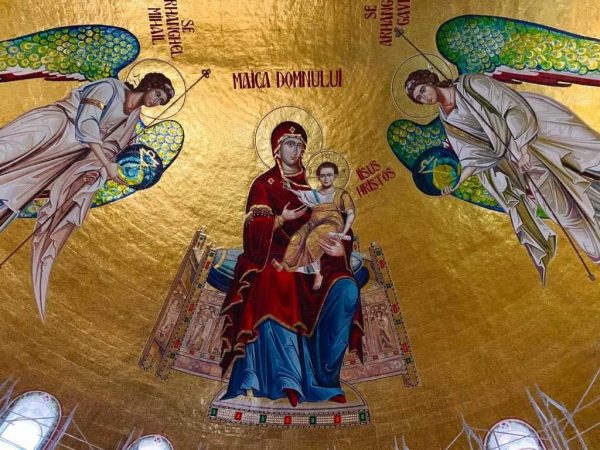 Painter Daniel Codrescu and his team are working tirelessly on the mosaic painting of Romania’s National Cathedral. They offered Basilica.ro a photo feature of the making of the Platytera Mother of God mosaic icon in the sanctuary.

The name of the icon means in Greek “Higher than the heavens”. This icon is usually of great dimensions and painted on the sanctuary apse interior wall, to emphasize the unique intercession done by the Mother of God for all mankind.

As all important works, the iconographic project of the altar started on paper: Of the above project, the semidome mosaic painting was completed and at present the team is working on the lower registers of the apse.

Starting with the highest and going downwards, the three registers present the following iconography:

First there were the “mirror” drawings made on paper. Over them mosaic tesserae (pieces) were mounted, with their golden part towards the paper support.

After applying the mosaic painting on the wall and cleaning the paper support on which it had been mirror-mounted, a mosaic looking like the project emerged – with the golden part of the tessarae towards the onlooker.

The team is currently working on the lower registers of the sanctuary apse, where the project includes representations of the prophets, of the apostles and of the holy Romanian hierarchs.

Work has also started on preparing the wall of the southern apse, where mosaic painting works  will start around Easter time.

If you want to be part of the project, you can donate for the mosaic painting of Romania’s National Cathedral: