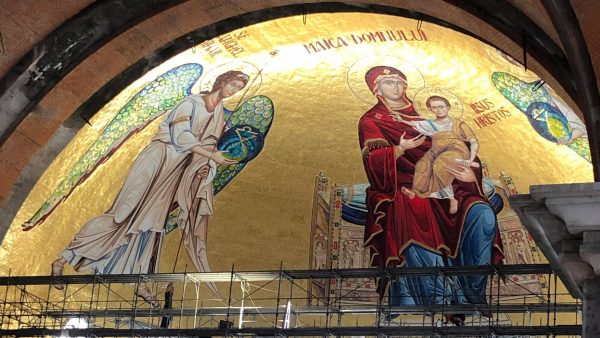 Romania’s most significant mosaic icon of the Mother of God emerged in the National Cathedral in Bucharest as workers have started removing tons of metal scaffolding covering the altar’s impressive iconography.

At present, about 50% of the altar painting work has been completed. The basin of the altar apse is completely covered with mosaic, including decorations on the window frames and nave’s belt.

Practically, once this stage is completed, there will be no scaffolding from 27 m upwards.

The most towering icon of the Theotokos’ More Spacious than the Heavens’ (Platytera) has several sources of inspiration from the art of Byzantine tradition. It is a synthesis “according to the Romanian soul” with elements from several well-known icons, Daniel Codrescu, the coordinator of the team of iconographers, explained.

The representation of the “Panagia Platytera” has a similar style as the iconostasis because these representations will be “read” together when the believers turn their gaze to the Cathedral’s altar.

Handmade tesserae from the Orsoni workshop in Venice are used inside the new Orthodox temple in Bucharest that will serve as Patriarchal Cathedral.

The efforts of the team led by iconographer Daniel Codrescu are still concentrated on the altar area, where large scenes such as “The Ark of Covenant” or “The Communion of the Apostles” need further work.

The works on the construction site of the National Cathedral continue during this period in the adjacent basements, the decorative plaster, the stone cladding and the mosaic iconography.