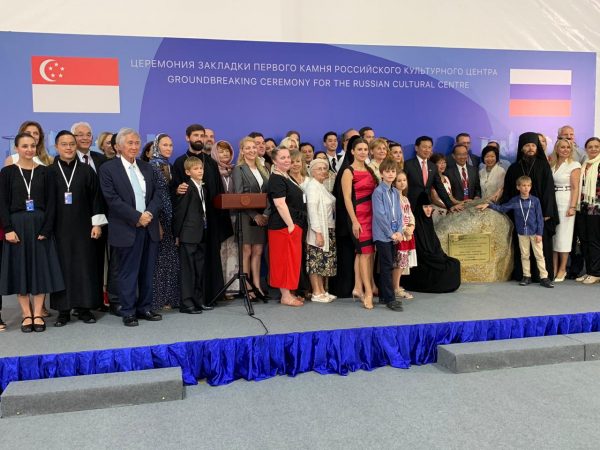 On November 13, 2018, President Vladimir Putin attended the ceremony of laying the foundation stone for a Russian cultural center and a Russian Orthodox church in Singapore. 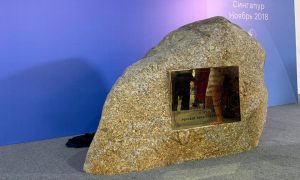 President Putin and the Republic of Singapore President Ms. Halimah Yacob arrived at the Russian plot of land on Rangoon Street. Among the speakers at the ceremony were Mr. S. Lavrov, Russian minister of foreign affairs, and Ms. Sim Ann, Senior Minister of State at the ministries of Culture, Community and Youth. Mr. Lavrov said in particular that ‘the construction of a Russian cultural-religious complex in Singapore will give a great boost to the expansion of humanitarian relations between our peoples’.

In her speech, Ms. Sim Ann stressed that ‘being a multi-national and multi-confessional community, Singapore welcomes the appearance of a church of the Russian Orthodox Church’.

The presidents of Russia and Singapore took off the fabric covering the foundation stone.

Archbishop Sergiy of Solnechnogorsk, administrator of the Moscow Patriarchate parishes in East and South-East Asia, read a prayer on the foundation of a cultural center and a church of the Dormition and sprinkled the stone with holy water.

The ceremony was attended by the Russian delegation including presidential staff, government officials, diplomats, bankers and businessmen, as well as clergy and parishioners of the Parish of the Dormition in Singapore.

On the same day, President Halimah Yacob gave a reception in honour of President Putin. Present at the reception was Archbishop Sergiy of Solnechnogorsk.

In his speech, President Putin said that the construction of a Russian cultural center and an Orthodox church will serve as ‘a good foundation for developing bilateral relations, especially on the level of people who will come to Singapore in growing numbers to get acquainted with your country and will have an opportunity to visit a Russian Orthodox church and our cultural center, while the citizens of Singapore will have an opportunity to familiarize themselves with the culture of the Russian Federation’.

With reference to the Russian Presidential Press Service