“Our Church has never hesitated to fight, when it felt it must, for the rights of mankind….there are times when we must risk everything, including life itself, for those basic American ideals of freedom, justice, and equality, without which this land cannot survive. Our hope and prayer, then, is that we may be given strength to let God know by our acts and deeds, and not only by our words, that . . . we, too, are the espousers and the fighters in a struggle for which we must be prepared to risk our all.” (Archbishop Iakovos, Selma, Alabama, 1965) 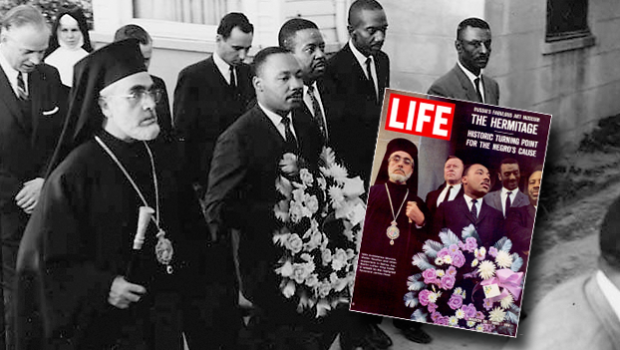 Every January, Americans pause to honor the memory of Rev. Martin Luther King Jr. who led a civil rights movement that called this nation to see every person as created in the image and likeness of God and worthy of equal treatment under the law.

One of the most beautiful moments in American Orthodox history was when Archbishop Iakovos of North and South America chose to march against racial segregation laws with Rev. King in Selma, Alabama. This event, made famous on the cover of Life Magazine, serves as a constant reminder that the Orthodox faith is not a museum of history but a way of living in the world that must be carefully cultivated and acted upon.

What we believe as Orthodox Christians is not merely one private opinion among many but an eternal truth that has serious implications for every choice we make. The fact that the most distinguished bishop in American Orthodoxy chose to march with Rev. King reminds every Orthodox Christian that we can learn much from the witness of America’s leading civil rights leader.

Rev. Martin Luther King was not simply a political activist or community organizer. His leadership of the American civil rights movement was deeply rooted in his Christian faith. A look at Rev. King’s writings shows that he possessed a mature biblical faith that was rooted in the witness of the early Christians. Rev. King’s famous “Letter from Birmingham Jail” reveals timeless lessons for Orthodox Christians and all people of good will.

Here are four Orthodox Christian lessons that can be learned from Martin Luther King Jr:

Since the earliest of biblical times, God’s people have often been called upon to say “NO” and “REPENT” to those in power. Rev. King illustrates this very clearly: “(Civil disobedience) was evidenced sublimely in the refusal of Shadrach, Meshach and Abednego to obey the laws of Nebuchadnezzar, on the ground that a higher moral law was at stake. It was practiced superbly by the early Christians, who were willing to face hungry lions and the excruciating pain of chopping blocks rather than submit to certain unjust laws of the Roman Empire.”

Archbishop Iakovos’ words in Selma echo this view: “We have fought oppressive and repressive political regimes, based on Christian principles, for centuries. . . . A Christian must cry out in indignation against all persecution.”

Civil disobedience in the service of God is a powerful catalyst for repentance and spiritual growth. Lives and laws are changed forever when Orthodox Christians live their faith with courage and without apology. Orthodox Christians cannot help but turn their thoughts to the imprisoned bishops and nuns of Syria and the courageous witness they live as they are held in captivity for their Christian faith. Patriarch John X of Antioch could not choose better words when he reminds us: “To be a messenger of peace does not mean that one is a messenger of submission.”

2. Being Legal Does Not Mean Being Right

“Never forget that everything Hitler did in Germany was legal.” This warning from “Letter from Birmingham Jail” points to the tradition of natural law. Natural Law is an integral part of Orthodox Christianity and the thought of Martin Luther King.

What is natural law? It is the teaching that just laws participate in and reflect the law of God. Man has a natural knowledge of right and wrong given to him by God. St. John Chrysostom makes this clear : “When God formed man, he implanted within him from the beginning a natural law. . ..And what then was this natural law? He gave utterance to conscience within us; and made the knowledge of good things.”

Orthodox Christians have a responsibility to recognize laws in our society that agree with the moral laws of God and call into question and resist those laws that clearly do not. Consider the many Orthodox Christians who every year participate in the March for Life against the Supreme Court’s unjust Roe v Wade decision. These marchers serve as a reminder that even today there remain people whose God-given rights are not recognized by the laws of the United States. There are still unjust laws that need to be overturned.

3. Be An Extremist For Love and Truth

Often times Orthodox Christians are criticized for being extremists if they take a public stand in support of what the Church teaches. For example, those who actively support pro-life or pro-family causes are often called extremists by their own brothers and sisters in the faith and even Orthodox clergy. What is amazing is that Martin Luther King was treated in exactly the same manner by his brother clergy, who shunned him and labeled his actions “extreme.” Archbishop Iakovos also faced considerable resistance to his marching with Rev. King from elements within his own flock.

Rev. King turned the tables on his critics with the following words:

“But though I was initially disappointed at being categorized as an extremist, as I continued to think about the matter I gradually gained a measure of satisfaction from the label. Was not Jesus an extremist for love: ‘Love your enemies, bless them that curse you, do good to them that hate you, and pray for them which despitefully use you, and persecute you.’ Was not Amos an extremist for justice: ‘Let justice roll down like waters and righteousness like an ever flowing stream.’ Was not Paul an extremist for the Christian gospel: ‘I bear in my body the marks of the Lord Jesus.’ . . . So the question is not whether we will be extremists, but what kind of extremists we will be. Will we be extremists for hate or for love?”

Every saint of the Church is an extremist for the love of Christ. St. John Chrysostom is an example of an extremist for love who endured tremendous criticism for his faith from those inside and outside the Church before being vindicated as a voice for the poor and weak. His life shows that it is a healthy extremism of love and the truth of the Gospel that transforms individuals and society for the better.

4. Faith Is a Thermostat, Not a Thermometer

In the same way that a thermostat sets the temperature in a given room, Orthodox Christianity changes our society and is not a mere indicator (or thermometer) of popular culture. “Letter from Birmingham Jail” is not just a call for social action, it is also a critique of Christianity and that includes our own Orthodox Christian witness today.

Rev. King has some harsh words for Christians who place more value on social order and acceptance than on being icons of truth.

“Yes, I see the church as the body of Christ. But, oh! How we have blemished and scarred that body through social neglect and through fear of being nonconformists. There was a time when the church was very powerful–in the time when the early Christians rejoiced at being deemed worthy to suffer for what they believed. In those days the church was not merely a thermometer that recorded the ideas and principles of popular opinion; it was a thermostat that transformed the mores of society. Whenever the early Christians entered a town, the people in power became disturbed and immediately sought to convict the Christians for being ‘disturbers of the peace’ and ‘outside agitators.’ But the Christians pressed on, in the conviction that they were ‘a colony of heaven,’ called to obey God rather than man. Small in number, they were big in commitment. They were too God-intoxicated to be ‘astronomically intimidated.’ By their effort and example they brought an end to such ancient evils as infanticide and gladiatorial contests.”

The Orthodox Church is the single greatest agent of human development in history. When the faith is lived to its fullest, Orthodoxy has the ability to transform the world in which we live. It also brings justice to those who suffer and gives a voice to those who have none. The early Apostles were able to alter the course of the Roman Empire, armed only with their faith. Likewise, Rev. King forever changed the United States, armed only with the same Gospel.

The words of Rev. King and the image of Archbishop Iakovos marching with him in Selma, Alabama are not mere nostalgia from a time gone by. Their witness is not confined to history books. They represent an urgent question for every Orthodox Christian in America.

What type of Church will we be? Orthodox Christians can choose to turn inward, selfishly focus on themselves alone, and slowly self-destruct, or we can turn outward and embrace the gift of the Holy Spirit that led Archbishop Iakovos to Selma, Alabama in 1965 and repeat his words time and again:

“The church will not be pessimistic, nor sit quietly in its handsome houses of worship while war rages outside its churches for the bodies, minds and souls of its parishioners.”

Martin Luther King Jr. and Archbishop Iakovos both knew that the human person as the image and likeness of God was a truth worth breaking the law, fighting and (in Rev. King’s case) ultimately dying for. Orthodoxy in America needs this type of courage today more than ever.