Source: OrthoCuban
She does not retreat to her convent, nor does she merely engage in acts of charity. Rather, she becomes a rather strong advocate for women. She begins a rescue mission for abused women.
Priest Ernesto Obregon | 07 May 2015 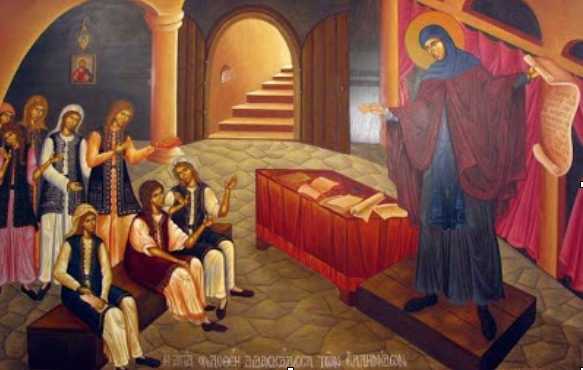 I was privileged to be present at an Oratorical Festival yesterday. Listening to the junior and senior grade divisions I was impressed with the amount of work that they had put into their verbal deliveries. But, more than that, I was impressed by the research that the youth had to back up their oratory. One particular presentation, about Saint Philothea of Athens (or the Monastic, or the Martyr), reminded me that the Orthodox Church is often called back to the straight and narrow by her saints, and that her saints also keep us on the straight and narrow if only we would read about their example, and then ask for their intercession.

Some basic facts on Saint Philothea. She was born in Athens in 1522 and was named Revoula. During this time, Athens was under the cruel occupation of the Turks. (Yes, the same ones who claim to have committed no Armenian genocide.) When she was 12 years old, she was given away in marriage. Unfortunately, her husband was an abusive husband who beat and abused her to the point that Revoula would pray that God would bring him to his senses and spare her. Three years later he died—which quite frankly is a scary reminder of how God sometimes chooses to listen to his saints and answer their prayer. She was 15.

She decided to lead a life of vigil, prayer, and fasting. This is not surprising given the treatment that she received. She moved back in with her parents and lived with them for 10 years until they had both died. After their death, she built a monastery dedicated to Saint Andrew, and took on the name Philothea (Philothei) as its first nun. But, this is where her story differs from that of many other saints. She does not retreat to her convent, nor does she merely engage in acts of charity. Rather, she becomes a rather strong advocate for women. She begins a rescue mission for abused women. Again, this is not surprising, given her horrific experience at the hands of her husband.

For the rest of her life Saint Philothea devotes herself to those who are abused and ignored. She founded schools. But, more importantly, she begins to ransom her fellow countrymen from servitude and slavery. She gives refuge to women who run away from their masters and abused women who run away from their husbands. Contrary to what all too many would have said back then, Saint Philothea stands for the rights of women during a time in which even some in the Church would have agreed with the abusive husband and the rights of property of the Turkish invaders.

Not surprisingly, Saint Philothea faced death at the hands of the Turkish authorities. The first time, she was saved by her fellow Christians, who assembled in mass and pacified the Turkish judges. She founds a second monastery in a suburb of Athens, and continues her work. But finally, years later, the Turks tire of her work. One night, as she goes about her rescue duties, she is grabbed, tortured, and beaten until she is left for dead. She is taken out and thrown on the ground and left for dead. Her sisters rescue her, but she dies on 19 February 1589. Saint Philothea, pray for us.

Saint Philothea is not a liberal. She cannot be. She existed before the days of the modern liberal/conservative debates. But, she speaks clearly to our century and reminds us that human rights are an Orthodox belief. More important, the support of human rights is a godly activity, and representative of the finest part of Orthodox social consciousness. When Archbishop Demetrios marched with Martin Luther King in Selma back in 1965, he was standing in the shoes of Saint Philothea. He did not make a mistake. He was not taken in by liberals. Rather, he was speaking to all of us with the voice of Saint Philothea who called us to support human rights, even to the point of being beaten, being fire hosed, having dogs set upon us, and even unto death itself.

In this century in America, in the midst of our cultural debates, it is the voice of Saint Philothea of Holy Tradition that can guide us to appropriate stances. Human rights is not an option, but an Orthodox necessity. Any stance that does not clearly support human rights to the point of death is not an Orthodox stance.

But, notice that Saint Philothea, along with Archbishop Demetrius, clearly calls us to a radical involvement with the poor, with the oppressed, with abused women, with those who are enslaved. That also is part of the role of the Orthodox Church in this society. I commend those who are involved in the pro-life movement. But, the Church must be involved in more pro-life activities than only being against abortion. Both Saint Philothea and Archbishop Demetrius point us to other arenas of fruitful involvement in which our witness as a Church is an important part of our life.

More than that, I will argue that to use the Church as an excuse for demanding that the government not be involved in the care of the poor and the defense of the oppressed is inappropriate. My experience is that those who most argue that it is the Church’s job to take care of these social matters are the ones who are least likely to give sacrificially to Church works that do take care of those matters. If you force the government to not be involved, but then argue that no one shouldhave to give to the Church for the carrying out of her social work, then you are no different than those whom the Lord castigated when he said in the Gospels that the Pharisees declare something Korban in order to not have to take care of their parents. Either way, you stand rebuked by the Lord.

Saint Philothea, pray of us.