Source: Sputnik
Natalya Mihailova | 01 August 2016
Muslims living in the French town of Saint-Etienne-du-Rouvray, refused to bury Adel Kermiche, an extremist involved in the murder of the priest Jacques Hamel. 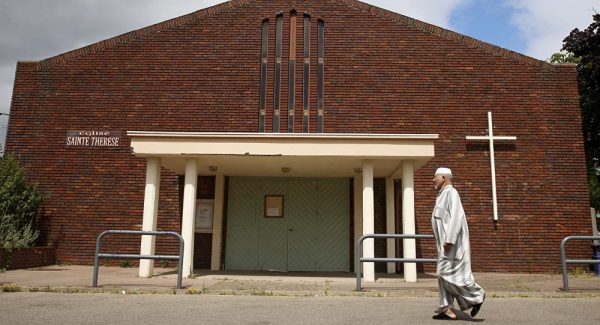 The head of the local Muslim community and the imam of one of the mosques, Mohammed Karabila, said they don’t want “to taint Islam with this person”.

The priest aged 85, who was described as always being kind to his parishioners, modest and dedicated to religion, was brutally killed by Kermiche and another attacker in a Normandy church during the morning service.

“We’re not going to taint Islam with this person,” Karabila told French newspaper Le Parisien, cited by Sky News. “We won’t participate in preparing the body or the burial.”

On Tuesday, Kermiche and another attacker, Abdel Malik Petitjean, took five people hostage at the Saint-Etienne-du-Rouvray church in Normandy, murdering Father Jacques Hamel. The Islamic State jihadist group [Daesh], outlawed in many countries including Russia, claimed responsibility for the attack.

Karabila’s decision was supported by all members of his community.

“What this young man did was sinful, he is no longer part of our community,” the 25-year-old Khalid El Amrani said, cited by Sky News.

Earlier, commenting on the brutal attack, French President Francois Hollande said, “killing a priest and attacking a church is an attack on all of France.”

He also added that the war against terrorism will be long but France will win it.

“This will be a long war. Its target is our democracy, but it will be our shield. We should be united, and unity is our strength. Let us unite, all of us, Frenchmen and Frenchwomen. I assure you, we will win this war. Long live France!”