I was recently conversing with a young woman in my parish who had been asked what her stand was on this arrangement. She knew that she was against it, of course, but could not quite articulate why, and so I promised to offer a response that would provide a sound Christian basis for her instinctive reaction. She would say, “No,” not just because “friends with benefits” was vaguely “wrong,” but because it was not consonant with her faith.
Priest Richard Rene | 15 November 2011

No, this is not a review of the recently-released romantic comedy starring Justin Timberlake and Mila Kunis. For those of you who do not already know, “friends with benefits” is a euphemism—common these days—for a relationship in which two people engage regularly in sexual activity without making a long-term commitment to one another.

I was recently conversing with a young woman in my parish who had been asked what her stand was on this arrangement. She knew that she was against it, of course, but could not quite articulate why, and so I promised to offer a response that would provide a sound Christian basis for her instinctive reaction. She would say, “No,” not just because “friends with benefits” was vaguely “wrong,” but because it was not consonant with her faith.

Ironically, the movie mentioned above follows a standard plot formula to arrive at the very conclusion I will propose: that a sexual relationship cannot help but be ‘entangled’ in emotional, psychological and ultimately, spiritual, commitments. One way or another, human experience shows that the disconnection of sexual intercourse from other forms of intimacy cannot take place without significant violence being done to those involved.

Why is this so? For non-Christians, the issue is either one of gut reaction (which finds its expression in the plots of popular movies, for instance) or else moral outrage (it’s wrong because it goes against a specific religious or ethical code). For Christians, however, the failure of social arrangements like “friends with benefits” is rooted in an understanding of the human person, which is in turn shaped by the Person of Jesus Christ. 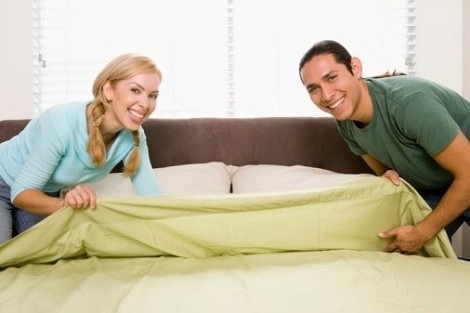 In the Christian understanding, Jesus Christ the Son of God became Incarnate in order to reunite God with His creation. As a man obedient to death on the Cross, Jesus embodies the ideal and perfect human being. To become truly and fully human, therefore, means attaining “the measure of the stature of the fulness of Christ.” (Ephesians 4:13) United to Christ in baptism, partaking regularly in His Body and Blood through the Eucharist, striving to imitate Him daily, we become more ourselves—the real human beings we were created to be.

This new identity in union with Jesus has certain implications, not just for whether or not we go to heaven or hell, but for our whole human existence—body and soul. Addressing immorality in the Corinthian Church, the Apostle Paul reminds his community that their physical bodies are members of Christ. “Shall I therefore take the members of Christ,” he asks, “and make them members of a prostitute? Never! … Do you not know that your body is a temple of the Holy Spirit within you, which you have from God? You are not your own; you were bought with a price. So glorify God in your body.” (1 Corinthians 6:15, 19-20)

Salvation, then, is not just an intellectual matter, an abstract state of legal justification before God that is otherwise disconnected from food and drink, sex and relationships, and the rest of the ‘stuff’ of the body and its physical life. If Jesus Christ took on a human body to exalt that body and make it His spotless Bride, the temple in which God comes to dwell, then our bodies cannot be merely utility vehicles for the soul, to be discarded at death. Rather, the Apostle Paul says, we glorify God in our bodies. What we do with our bodies—how, specifically, we engage in sexual intercourse—itself speaks to the world of God’s glory in Christ.

In this understanding, “friends with benefits” can have no place. To deny the connection between the activities of the body and the life of the soul, and to use sexual intercourse merely as a tool for physical pleasure is to denigrate the worth of the human condition in which and for which Christ was born, lived, suffered and died.

On the surface, social arrangements like “friends with benefits” would seem to exalt sexuality by making it widely accessible. No longer restricted by commitment, no longer strangled by the tedium of marriage, we can all now “celebrate our bodies” however we want (as long as we are consenting adults in the privacy of our homes).

In reality, the “friends with benefits” culture degrades the body and its life. Casual sexuality (like excessive drinking or eating, unnecessary sleeping, or any other physical activity undertaken self-indulgently) devalues the humanity that God paid the ultimate price to redeem. The Incarnation reminds us that we were meant to be so much more, and calls us to treat our bodies with the reverence of God’s own dwelling place.