“From Now On You Will Be Fishers of Men” 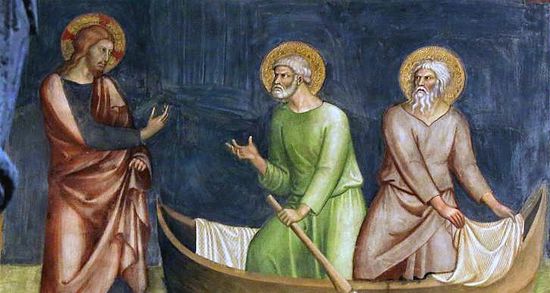 We are all familiar with the reference to the Hebrew people of the Old Testament as the “Chosen People of God.” For what purpose did God choose them, what was their mission, what were they supposed to do? God desires that every person should be saved. God’s original plan was that the Hebrew people would help to facilitate this. First of all, they worshiped YAWEH, the one true God who made heaven, earth, mankind and everything that exists. It was God’s hope that all the Hebrew people would bear witness to the rest of the world to the truth and to the true God. It was God’s hope that through the Hebrew people all of mankind would be drawn into His fold, that all people everywhere would come to know and love Him and learn to live according to His divine commandments. As we know, this plan did not come to fruition, for the Hebrew people proved to be unworthy of this task, they themselves succumbing to grievous spiritual sickness, sin, and even idolatry. Instead of being able to fulfill their mission to minister to the rest of the world, it became necessary for God to send prophets to minister to them.

The final Covenant and the final plan of God to draw the entire world into His fold was made through Jesus Christ. It became, and will remain until the end of time, the Church — the new Israel, who will bear witness to the true faith and to the true God to the rest of the world. No longer was only one particular race or tribe “chosen” to draw the world to God. The doors of the Church are open to everyone of every race or nationality — to all mankind. To use the language of Scripture, “there is neither Jew nor Greek, there is neither slave nor free, there is neither male nor female; for you are all one in Christ Jesus. And if you are Christ’s, then you are Abraham’s offspring, heirs according to promise” (Galatians 3:28).

Concerning the spiritual health and the worthiness of the Christians to fulfill this awesome task, in many ways we are no better, but in many ways even worse than the old Israel from whom we have inherited our awesome responsibility. The paradox of Christian existence is that in as much as we are called to minister to the rest of the world, we are just as much in need of ministering to ourselves. However, unworthy as we are, this should not deter us from our awesome calling to draw the entire world into the net of Christ.

Today we heard in the Gospel how Jesus called His first disciples, the first of His apostles. The Lord does not go to the universities. The Lord does not go to the Temple or to the synagogues. The Lord does not go to the Sanhedrin. The Lord goes to the seashore where He encounters simple uneducated fishermen. These are the men that are chosen and called by Jesus to be His followers. When human logic defied the possibility of catching any fish (for they “toiled all night and took nothing” (Luke 5:5), at Jesus’ word the net is cast into the sea, and such an enormous amount of fish are taken, that the nets begin to break. Just as the magi, who worshipped the stars, were taught by a star to adore the Orient on High, the fishermen are taught by a miraculous catch of fish that they will become fishers of men. The word apostle means “sent.” These humble fishermen will undergo training, learning and discipleship by Jesus, Who will later send them into the world as His first missionaries to preach the Gospel, the “Good News,” and bring men to God and who will fill His Church. All Christians must understand that just as originally all the Hebrew people were chosen to bring mankind to God, all Christians are called to bring our neighbors to God. Every Christian is an apostle. Every Christian is an Evangelist. Every Christian is a missionary. We have received a wonderful and sacred gift in the Church, and it is not right to only keep it for ourselves and not share it with others and invite others to join us in our great joy and love. If simple, uneducated fishermen were able to become the leaders of the Church and to draw the world into the net of Christ, then what is our excuse not to do likewise?

Metropolitan Philip Saliba (+2014) of the Antiochian Orthodox Archdiocese said that “Orthodoxy is the best kept secret in America.” Let our faith, our hope and our love no longer be a secret to our fellow Americans. Let us all in our own humble way share this “good news” with our neighbors, our families, our friends, and let our faith no longer be a “best kept secret.” Many people are thirsting for God and for the happiness and meaning to their lives that only God can offer them. May God help all of us to be better Christians, and may God help all of us in the sacred task to help lead people to Christ, to the Church, to salvation. Amen.

Being Kind and Patient with One Another

In the vast wisdom of Mister Rogers*, his underlying theme was about how to be a good neighbor.…