In the only Orthodox Church in Gaza, surrounded by saints’ icons hanging on the walls, young and old churchgoers — along with Greek Orthodox Bishop Alexios and worshippers — sing hymns, hold candles and burn incense, filling the place with an aromatic smell and bringing more holiness upon this sacred dwelling. They pray in celebration of the 1,606th anniversary of the church’s founding, which was built in the year 407 AD.

Maria, age nine, Julia, six, and Christina, three, are all sisters, wearing bright colors as if they were attending a ballet ceremony. They were elated to celebrate the anniversary of the church’s founding. “I am very proud that Gaza has a very ancient church, where I can pray with my daughters every Sunday,” the mother of the two girls said. 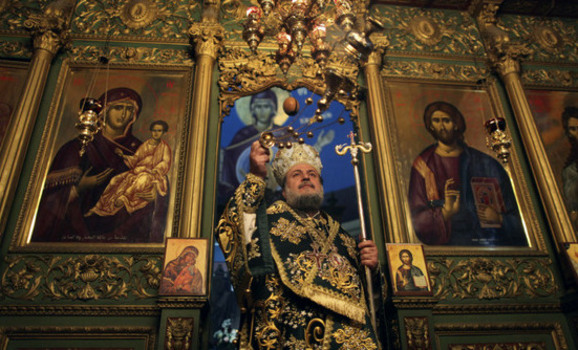 Sanaa Khoury said that her family is originally from Gaza City and that she is proud of this church that her ancestors attended. She added, “St. Porphyrius is Gaza’s patron saint; today is his feast day, the anniversary of the church’s founding. It is a holy day.”

While today Christians in the Gaza Strip number around 1,500 people, most of whom are Greek Orthodox, in the mid-1990s there were as many as 5,000 Christians.

Suheil Abu Dawo and Sami Salama are two friends who are nearly 70 years old. They left the ceremony early and talked to Al-Monitor, often completing each other’s sentences. “Today is the feast day of St. Porphyrius. This saint had struggled to reach Gaza in order to spread Christianity, as Gaza was a pagan city at the time. This church is one of the oldest in the world. It was named after St. Porphyrius,” they said.

Salama added: “I have visited many churches in the West Bank, but no church is as ancient as this one. Although it is lacking gaudy decorations, it has its own significant stature. The church has withstood the test of time and is regarded as the rescued ship of life.”

After three hours of hymns and prayers, worshipers left the church to the church lounge to chat and exchange greetings with the bishop.

Father Andrea told Al-Monitor: “Today is an honor for all of us. The church is even more ancient than it was before. It is a holy place in this ancient city.”

For his part, Bishop Alexios, who was dressed in his cassock, wore a pendant depicting the Virgin Mary and was carrying an ornate cane, told Al-Monitor: “This ancient church reflects the history of Gaza, which experienced periods of paganism, Christianity and Islam. Today marks the church’s 1,606th anniversary, which is a proof that Christianity continues to exist in the city.”

The church stretches over an area of approximately 216 square meters in the Zeitoun neighborhood, one of Gaza’s oldest districts. The St. Porphyrius Church is adjacent to the Welayat Mosque, one of the mosques in Gaza’s old city.

The church’s groundskeeper Nabil Iyada said that today is a normal day of celebration, but what is not normal is the great number of years the church has been around. Thus, Iyada feels we ought to be more responsible in preserving it, as it is one of the oldest churches in the world.

These ceremonies are held very often by Gaza’s Christians, who consider the church to be a place where they can gather and exchange greetings amid a Muslim majority population numbering more than 1.5 million.

Hana al-Suri considers the church to be her second home. “I proudly say that this church is my second home, where we all meet to chat, receive religious advice, and share each other’s joys and sorrows, especially since this is the only Orthodox church in the city,” she said.

Suheil Salama prides himself on being Christian, as Christianity has an ancient history. He added that he came with his relatives to pray in this ancient church, which contains relics of St. Porphyrius.

Children also went to pray and to celebrate alongside the adults. Aspiro, eight, was dressed in a white gown embroidered with golden thread. In one hand he held the bible, while clinging to his father with the other.

The Christian community is the smallest minority in Gaza. It includes a family comprised of five members who are Coptic, 20 Protestants, 200 Catholics and the rest Greek Orthodox. They all live under the blockade imposed by Israel, which prevents Christians between the ages of 16 and 35 from leaving the strip to pray or spend holidays in the West Bank, according to Jabr al-Jalada, the director of religious relations in the Orthodox Church.

Most viewed articles
Saint John Chrysostom and Family Life140
What Can the Church Offer the Youth of Today?137
Our Unity in Christ80
Metropolitan Hilarion: Christians in the Middle East and Other Countries Need Both Our Support and Prayer64
Patriarch Theophilos III of Jerusalem: Our Common Commitment is to Gather for Prayer and Fellowship49
Healing the Inner Pharisee6
P.Kirill1
Most popular authors
Archimandrite Ephraim of Vatopedi140
Metropolitan Ephrem (Kyriakos)137
Pravmir.com team113
Abbot Tryphon80
Archpriest Stephen Freeman6