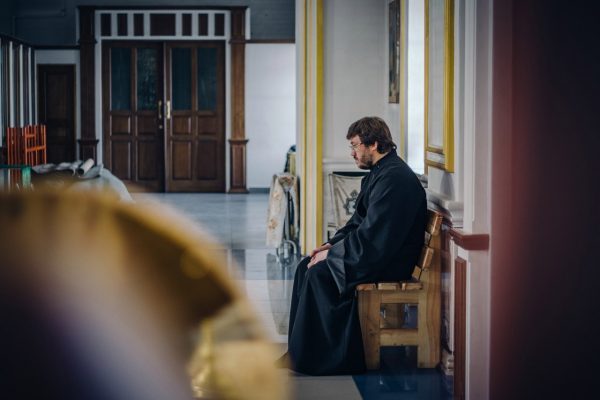 The old way to become a priest or pastor was to be called when one was young. You know, the child who was called early, who grew up in high school knowing he wanted to be a minister, who went to college and seminary. Roman Catholics, in particular, have a very good system of recruiting future candidates for the priesthood as early as middle school. They used to (and may still) have a system of high schools that were seminary oriented to prepare the interested teenager. Finally, the priest-in-training would go to a college seminary and come out seven years later as a priest. In many churches, some such process is still the preferred process. Some jurisdictions and denominations have a serious problem with those who receive a later call. They do not fit the system. We have no way to fast-track them. We often tell them that they must go through the entire process, meaning that we hope that they will go off to seminary, and we will not have to worry about dealing with them for several more years. We know that many adults cannot afford to quit their job to go study, so we can blame it on either their lack of desire, or even call it proof that God does not really want them there.

But, both Scripture and Tradition show a God who does call people from birth–such as Jeremiah and David–but also a God who calls people after they have an adult life and career. From Abraham, through Gideon, through ALL Twelve Apostles, through many Saints in history, God calls people after they are grown. Sadly, all too many jurisdictions and denominations do not really have a good way to bring those people in and train them without breaking their finances. It is among the more Anabaptist types, among the African-American churches, among the independents, that these ministers can rise up and serve God. All too often, they go awry in their theology or practice. Almost always, we treat them as lesser beings, and use all type of reasons to justify ourselves for not having brought them in and trained them, or worse, having brought them in and deliberately delayed them. We always have good reasons. Well, so-and-so was brought in too quickly and now we dare not trust anyone. Well, so-and-so has a reputation and they will ruin our reputation if we ordained them (think Chuck Colson).

The reality is that most Churches feel much more comfortable with the one called from the cradle than with the convert. No bad story about a cradle sticks while every bad story about a convert is repeated as though this applies to every convert, and justifies the–sometimes incredible–restrictions that are placed on converts. For instance, one jurisdiction is convinced that a convert pastor must wait a minimum of 10 years to be ordained. By that time, they have effectively, probably, destroyed his call. But, this is under the guise of protecting the Church. That same jurisdiction had a severe scandal several years ago that led to cradle bishops resigning, cradle bishops being disciplined, and a monastic being made Metropolitan who was also pulled from his post within a couple of years. But, those are cradles, not converts, so it does not set any principle. In all Christian groups, it is difficult to accept the convert and easy to excuse the cradle.

I am in a doctoral-level class now that has to do with chaplaincy. We have an ex-business manager, a retired sergeant major, a retired Army ranger, a couple of licensed professional counselors, a Gulf War veteran truck driver who used to drive the desert road from Iraq to Kuwait. Here is what we all have in common. Not one of us was called to be a priest or pastor from young. In that sense, all 11 of us are converts. Almost all of us went through some type of painful experience. All of us received a late call. One of us was not even hearing the call. God sent another pastor to talk to that person one-on-one to tell that person that they were called to the ministry! It took! Now that person is going for a doctorate. Another one said no; then he went to his wife who said yes, it’s you; then he went to his pastor, who said yes, it’s you; then the congregation said, go already. These people are the future of chaplaincy, though at least one is as old as I am, while another has two children under 10, and wants to be a writer as well.

Now, it is neither better nor worse to have a priest/pastor who is a cradle or who is a convert. Each approach brings a different set of experiences and a different set of skills/tools to the ministry. What is important is to discern whether God has truly called someone to the ministry and to facilitate their entry into ministry. That means that we need to be perceptive as to the when and how of bringing people into the ministry. We cannot write rules for entering into the ministry based on one or two bad experiences that become our excuse for keeping people out. We cannot write rules that facilitate the entry into ministry of those who received an early call simply because they grew up among us. Sooner or later, if we are not careful, we will throw away one of God’s blessings, or accept one of Satan’s plants due to our rules.

Proscomen  — Let us be attentive!