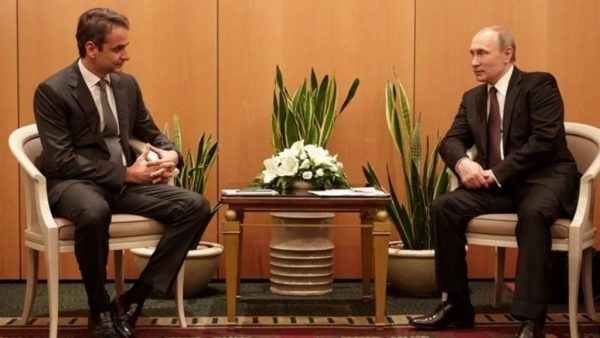 Greek Prime Minister Kyriakos Mitsotakis and Russian President Vladimir Putin had a telephone conversation on Wednesday to discuss Turkey’s decision to reconvert Hagia Sophia in Istanbul into a mosque.

A statement by the Kremlin said that the conversation, held at the request of Athens, focused on Russian-Greek cooperation in “a variety of fields”: economic, industrial, scientific and technical. The talk included a focus on regional issues, such as the settlement in Libya and the situation in the Eastern Mediterranean.

The two also discussed the reciprocal Year of History scheduled for 2021 and the celebrations in Greece marking the bicentennial of the Greek War of Independence from the Ottomans. The discussion also included a focus on Hagia Sophia.

The two “emphasised the unmatched cultural, historic and religious significance of that unique World Heritage Site and noted the importance of preserving it as universal heritage and a symbol of peace and cohesion,” the statement said.

On Friday, Hagia Sophia will have its priceless mosaics covered to operate as a mosque for the first time after 86 years of operation as a museum.

The official prayers will take place after a Turkish court decision revoking a 1934 decree which designated the site to be used as a museum.

Greek Orthodox churches in America will recognise Friday as a national day of mourning, designated by Archbishop Elpidophoros. In an unprecedented move, the United States Conference of Catholic Bishops called on its 70 million faithful to join the Greek Orthodox in the recognition of the conversion of Hagia Sophia.