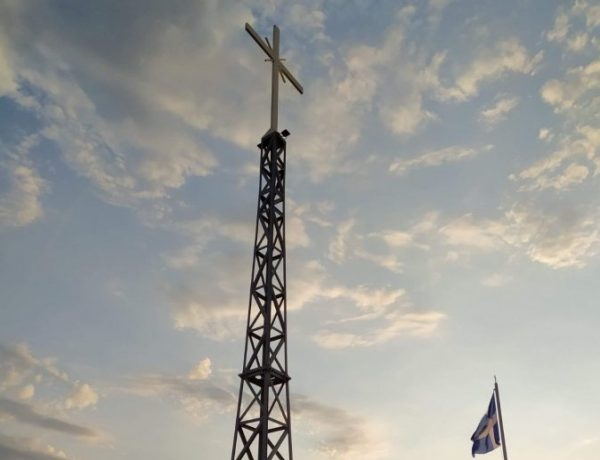 A huge cross was erected on Monday, the 14th of September, outside the monastery of Hagia Skepi-Saint Paraskevi in Nea Vyssa, that was visible from the Turkish side, reports the Orthodox Times. None of those who conceived the idea could ever imagine that it would provoke the wrath of the Turks.

A huge cross, the symbol of Orthodoxy, adorns the courtyard of the Monastery of Hagia Skepi – Saint Paraskevi in Nea Vyssa, which is a few hundred meters away from the Greek-Turkish border.

The inauguration took place last Monday, on the 14th of September, on the Feast of the Exaltation of the Holy Cross and attracted many people from towns and villages of Evros and from all over the region of Thrace.

The abbot of the Monastery, Archimandrite Varthalomaios Asteriadis, who opened the doors of the historic Monastery in March, spoke to ethnos.gr about the creation and construction of the Holy Cross: “The overall height is 15 metres. We felt the need to raise the symbol of Orthodoxy in the courtyard of our monastery.”

“Symbols are more important to those who believe in them than to those who do not respect them. If a monastery is not the right place for a cross, then which is? We placed the symbol of Orthodoxy next to our flags and inaugurated it on the day of the great feast of Christianity,” he added.

Archimandrite Varthalomaios Asteriadis also referred indirectly to the article published in the pro-government Turkish newspaper Yeni Safak, which deemed the issue as “a provocative action” towards the Muslims on the Turkish side: “We are doing what we have to do and the other side is doing what they have to do. We did not provoke anyone. We felt the need to raise the symbol that boosts the morale and faith of our people, our military and our police. It is illuminated by two large floodlights and is visible in the Greek Territory. We do not want to provoke or impress anyone, especially in critical times like this.”