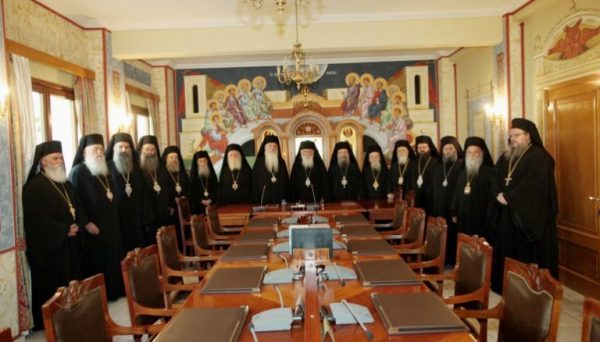 Athens, January 8, 2019 – The Holy Synod of the Greek Orthodox Church met today, taking into consideration Patriarch Bartholomew’s request to His Beatitude Archbishop Ieronymos of Athens to recognize and commemorate the primate of the new Ukrainian nationalist church “Metropolitan” Epiphany Dumenko.

However, the Holy Synod did not choose to recognize the new church but rather to pass the issue to the consideration of the supreme administrative body, the broader Bishops’ Council, involving every hierarch of the Greek Orthodox Church, according to the Synod’s official statement.

“The Holy Synod decided to refer the issue of the Greek Orthodox Church recognizing the new autocephalous church of Ukraine to the consideration of the holy Bishops’ Council of the Greek Church,” the statement reads.

The next session of the Bishops’ Council has not yet been scheduled.

The canonical Ukrainian Church’s Department for External Church Relations (DECR) notes that the referral of the issue to the broader Bishops’ Council indicates that the Greek Church is aware of the complexity of the issue, including “Metropolitan” Epiphany’s complete lack of any valid ordination, having grown up in the clerical ranks in the schismatic “Kiev Patriarchate.”

The DECR also draws attention to the fact that while Patriarchs Kirill and Bartholomew are referred to as such, Epiphany Dumenko is not referred to in the Greek Church’s statement as “Metropolitan.”

Several individual Greek hierarchs have spoken out against the actions of Constantinople and the Ukrainian state over the past several months, including the Metropolitans Nektarios of Corfu, Paxoi, and the Diapontian Islands, Seraphim of Piraeus (and here), Seraphim of Kythira, and Ambrose of Kalavryta.