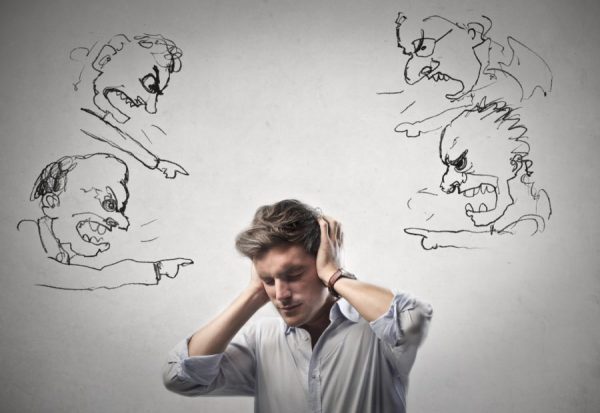 I cannot remember the name of my kindergarten teacher. I cannot remember the names of any of my first grade classmates. However, I have a very vivid memory of the only word I messed up in a first grade reading group: cupboard. I read, “Cup board.” Old Mother Hubbard would have been dismayed. In the same manner, I remember the word that brought my spelling bee prowess to an end in sixth grade: restaurant. Silly things of no importance, and yet, such memories remain and can carry a sting with them. They are sorts of things that nurture and build an inner Pharisee.

It is not unusual in confession to hear someone say that they are “judging others.” Whenever I hear this, I generally assume that the one who is being judged most harshly is the person who is confessing. The “judging” that takes place in our minds is the sound of an “inner critic,” a voice that begins early in childhood and can continue to torment us throughout our lives. It is, of course, rooted in shame, but can be a painful, even nasty voice that is harsh, unfair, and unrelenting.

We are human beings. We seek to minimize what is unpleasant and maximize the pleasurable. As such, we develop strategies in our lives to “cope.” Many of the components of what we describe as our personalities are simply the long habits of coping. Sometimes, the strategies (and so, our personalities) become our own worst enemies. The very things that once seemed to lessen pain may now be a source of pain. The force of habit, however, leaves us burdened and miserable.

The Pharisee, as depicted in the New Testament, is a failed construct, an effort to build a personality that will preserve a form of pleasure and satisfaction while holding the pain at bay. The structure provided by the rules of Talmudic Judaism (as understood at the time) offered a world that was defined as “righteous”: do this and you will be saved. The very structures that seem to satisfy and protect also serve to enslave and torment. Have I given tithes of everything? Have I prayed three times a day? Did I pray in the right way? Did I do work on the Sabbath? And on and on.

There are many structures in this world that can be used in such a manner. Every rule, from a prayer rule to the rules of grammar, exist for our sake and not the other way around. Every rule, particularly as we confront it from within our shame, has the potential to hide us from ourselves, in which case, it drags us into darkness.

Christ scandalized the rule-bound practices of the Pharisees of His time. He overlooked their requirements for the washing of hands (which was a matter of ritual purity rather than health). His disciples plucked grains in a field on the Sabbath in order to eat. No doubt, there were many such practices not recorded in the gospels. In each case, when questioned, Christ points past the practice to the heart itself. His rule, “The Sabbath was made for man, not man for the Sabbath,” pulled those around Him out of their bondage to mere morality (rules) towards the true, ontological, state of the soul.

So, what is going on here (within the world of our inner Pharisee)? The great battle is wrestling with our attempts to avoid the pain engendered by shame. We hate this emotion and will often do anything to avoid it (including making ourselves miserable in other ways). In the parable of the Pharisee and the Publican, the Publican endures the pain of his shame (particularly noted in his inability to lift up his eyes).

What does the Publican gain? We are told that he went home “justified,” which I take to mean that he went home in a right and proper state with God. There is a treasure that lies buried beneath our shame: our soul, the nakedness of the true self. We often spend the better part of our lifetime constructing a scaffolding of pretense, delusion, and imagination, largely to create a world of “safety” around the core of the self. That safety represents (for us) the absence of difficult or unbearable pain.

This is understandable. The world can be a cruel place. It is best, however, if our armor is honest. A difficulty with the armored life is its tendency not only to protect us from others but to hide us from ourselves. What we hide from ourselves, we hide also from God.

I have come to think of the shame construct within our lives as a sort of Hades. It imprisons us and holds us in a kind of prison – a life marked by an inauthentic existence. It is also the case that Christ has entered this existential Hades in order to deliver us. “I did not turn my face from the shame and the spitting.”

The crucifixion of Christ is also the revelation of the world’s shame (and the shame of each individual person). The 17th century Lutheran hymn captures something of this:

Ah, holy Jesus, how hast thou offended,
that we to judge thee have in hate pretended?
By foes derided, by thine own rejected,
O most afflicted!

Who was the guilty? Who brought this upon thee?
Alas, my treason, Jesus, hath undone thee!
‘Twas I, Lord Jesus, I it was denied thee;
I crucified thee.

In His crucifixion, Christ makes Himself responsible for the sins of all. We cannot be crucified with Him and do less.

The sins of the world can be something of an abstraction. It is likely easier to make ourselves responsible for those sins than to stand in the flames of our personal shame. When we “bear our shame,” whether in a setting such as confession, in the security of a therapeutic conversation, within the intimacy of a trusted relationship, or even as we stand alone before God and pray, we experience pain. Our face burns, we avert our eyes, tears may come as well. But just beyond and beneath that burning lies the truth. These tears, this pain, is Christ in us. It is little wonder that His first words of greeting in the resurrection are, “Peace be with you.” In this we hear:

“The very thing that you dreaded has taken place and I am still with you. Now we are home, together this day in Paradise. Now we stand in the Garden. You are naked and now unashamed.”

It is in that experience that we begin to see the truth of ourselves, and even to understand the mystery of the soul as the mirror of God. We need hide no more.