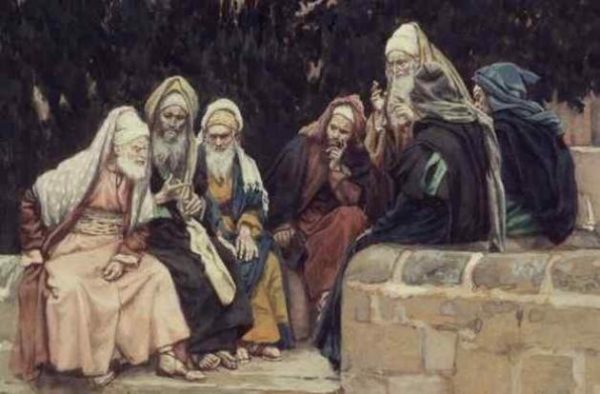 A Pharisee in the modern sense of the word is a person who treats God and his neighbor in a heartless way, without love, meanwhile putting himself and his virtues above all else. There are five main signs of a Pharisee.

The first sign is arrogance. It manifests itself in the negligent attitude towards one’s duties in one’s family, at work, or in society. It is easy for such a person to deceive his wife, frame his boss or a friend, because in his pride he considers them to be much lower than himself. He is ready to defend his point of view on a particular situation nonstop and categorically rejects someone else’s opinion. Since his own “I” is at the forefront, his relationship with God is superficial. For the sake of appearance only, so as not to harm his reputation, or by virtue of tradition, such person can go to church and attend divine services. However, he is not capable of true repentance and prayer, because he considers himself self-sufficient.

The second sign is theatricality in words and actions for the sake of pleasing people and opening the way to career heights. Such person likes to produce an effect, and therefore he treats one’s appearance, clothing, hairstyle, demeanor and conversation with special importance. Consequently, he immediately becomes cowardly and almost despairs if he is exposed to a serious illness or receives an unexpected injury. He spends a lot of time and money on maintaining physical health: he goes to a fitness club, a swimming pool, etc. Meanwhile, however, he is very greedy and impatient, and constantly complains of being very busy and of not having enough funds, if someone asks him for help.

The third sign is groveling before his superiors out of fear of losing his position or a post. Such person always shows how he loves everyone and takes care of everyone, but in fact he thinks only about himself. In order to stay in power and not to lose his job, such person does not think twice before slandering his neighbors – smiling into their faces, he is already plotting in his mind, looking for weaknesses. If he has access to large financial resources, he cannot do without fraud, deceit, corruption schemes, and if he loses power or material resources, he is extremely worried and thereby ruins his health ahead of time and drives himself into the grave.

The fourth sign is boasting of one’s achievements and virtues. Now it is very easy to do this through personal pages on social networks. The self-praise page is full of personal images, as if he is the center of the earth and everything revolves around him. He strives to be noticed and encouraged by others by all means, and he flaunts his awards and is immensely proud of them. If the reward bypasses him and goes to another, he sharply condemns his rival or the boss who has forgotten about his work, and sometimes he is ready to avenge them as his worst enemies.

The fifth sign is formalism – the meticulous formal execution of the letter of the law, the unwillingness to make at least small concessions for the good of one’s neighbor. This betrays hardness of one’s heart and indifference to other people. At the same time, such person stubbornly expects concessions and privileges made by others towards himself. And if he does not receive any, he easily becomes the biggest enemy of the same person whom he had recently hypocritically extolled, and maybe even sworn his loyalty and love.

Didn’t the great Russian poet, A. S. Pushkin, depict such person in his poem?

Half lord, half merchant
Half wise, half ignorant,
Half scoundrel, but there is hope
That he’ll be complete at last.

When pharisaism flourishes among people who do not know God, this is not so bad. But the most dangerous and most destructive hypocrisy is in the spiritual environment, among the clergy and laity. It is no coincidence that our Savior, Jesus Christ, loudly denounced the spiritual leaders of the Israeli people: “Woe to you, scribes and Pharisees, hypocrites!” (Matthew 23:13). Each of us can notice such signs or their beginnings in ourselves. But they should not lead us to despair. Attentive, unhurried, secret, hidden prayer, regular unhypocritical repentance, selfless help to others, periodic frank conversation with an experienced spiritual father develop reliable immunity against pharisaism.