Hierarch of the Ukrainian Orthodox Church: Politicians Rebelling Against the Church are Making a Huge Mistake

Source: Orthodox Life (Russian)
One needs to come to the Church not with instructions and decrees but with the prayer of the Publican.
Pravmir.com team | 18 August 2018 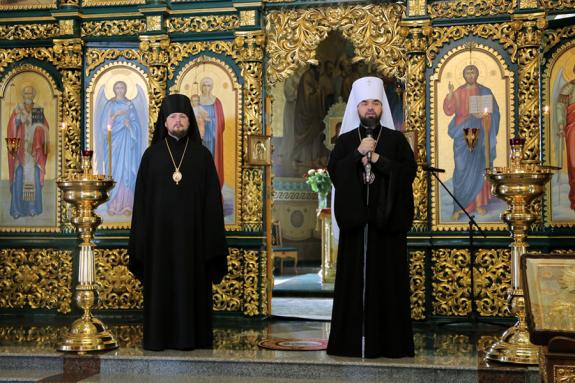 Orthodox Christians are not puppets blindly following the instructions from top corner offices. Those who forget about that are making a huge mistake. This was stated by Metropolitan Mitrophan of Horlivka and Slovinsk during his sermon at the end of the Divine Liturgy at the Holy Trinity Cathedral in Kramatorsk on August 12, 2018.

“For some reason, it seems to people in power, who openly sided with the schism and who show their hostility towards the canonical Orthodox Church, that Orthodox Christians are puppets who could be dictated and given some order from the Presidential Executive Office and would be expected to fulfill it in the way they were told. They have forgotten that they are dealing with the Church, the history of which is two thousand years of martyrdom and confession of the faith. This faith has not been anyone’s servant or has not done anyone’s bidding for all this time. We are honored to belong precisely to this Church”, Metropolitan Mitrophan said.

As the hierarch noted, it is impossible to speak to the Church in the language that politicians speak today. The reason is people, for whom faith is not an empty word, will never agree to this language nor give up their faith.

Metropolitan Mitrophan expressed his surprise that bureaucrats, who have destroyed everything that could be destroyed in the government, undertake to solve church problems, which no one ever asked them to do.

“We are offered some kind of jurisdiction to call the Mother those, who want to use the Church for their political purposes in their election campaign. They do not need the Church, they only use her. However, the Church is not a tool for believers, she is the Mother, through whom we receive the gift of forgiveness of our sins, salvation, and eternal life. We cannot by a decree of the Presidential Executive Office refuse the Mother, who each of us received in Baptism, in whose name we pray, confess, and commune, who gathers us all in one family”, Metropolitan Mitrophan mentioned.

The hierarch stressed that there will always be people in the Church ready to defend their churches like their own home. “They do not need someone to come and tell them what they should be like and how they should pray and serve God”.

“Those who do not notice this are making a huge mistake. Having rebelled against the Church, her people, and those for whom the Church is not an empty word, as it is for them, they have put themselves on the brink of the abyss. One cannot live in enmity with one’s people and the Church. One should understand this and come to the Church not with instructions and decrees but with the prayer of the Publican: “God be merciful to me a sinner!” Metropolitan Mitrophan concluded.