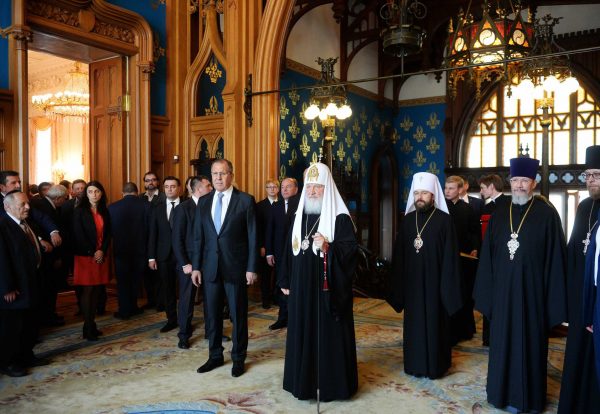 On April 17, 2018, the Ministry of Foreign Affairs of the Russian Federation held a grand Easter reception at its mansion. It was attended by religious leaders, heads of foreign diplomatic missions and Russian and foreign diplomats.

The festive meeting was attended by His Holiness Patriarch Kirill of Moscow and All Russia, who was welcomed by Russian Foreign Minister Sergey Lavrov.

Participating in the event from the Russian Orthodox Church were also Metropolitan Hilarion of Volokolamsk, head of the department for external church relations (DECR); Metropolitan Arseniy of Istra, first vicar of the Patriarch of Moscow and All Russia; Archbishop Sergiy of Solnechnogorsk, head of the Moscow Patriarchate administrative secretariat; Archpriest Sergiy Privalov, head of the synodal department for cooperation with the Armed Forces and law enforcement; V. Legoida, head of the Church’s relations with society and mass media; Archpriest Nikolay Balashov and Archimandrite Philaret (Bulekov), DECR vice-chairmen; and clergy and staff members of the DECR. 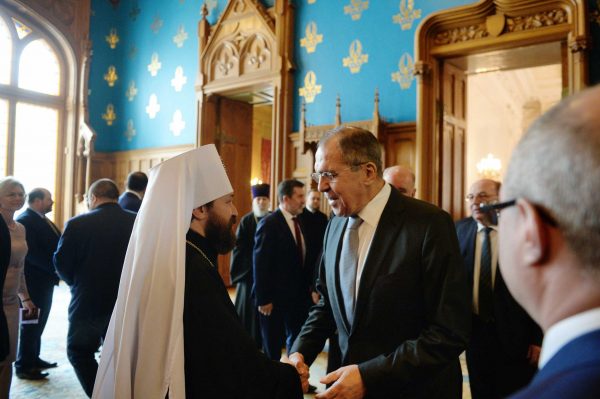 Mr. Lavrov greeted all the guests noting in particular, ‘In all times the Russian Orthodox Church has been with its flock, sharing Russia’s destiny, inspiring people for feats in the name of the Motherland, helping them to hold out in years of hard trials. Today the Church makes a considerable contribution to the search for optimal solutions of pressing problems on the all-Russia’s agenda, maintenance of civic peace and accord, consolidation of society around intransient spiritual and moral values, intensifies beneficial social and educations work, and does much to strengthen the institution of the family and education of the younger generation for Christian ideals.

‘This selfless work is even more demanded today as the situation in the world is becoming ever more chaotic and less predictable. In great many Western states there is a dangerous and at the same time shameful tendency of rejection of their own spiritual and civilizational roots. And comfort and success are declared to be the main criteria of human existence, as you, Your Holiness, noted in our Pascal Message. This course is not only vicious but also anti-democratic since it is propagated by the aggressive minority in defiance of the will of the overwhelming majority of citizens’.

The minister reminded the gathering that ‘the export’ of pseudo-liberal values combined with overtures with radicals, division of terrorists into those ‘bad’ and those ‘good’ have led to the chaos and anarchy in vast spaces of the Middle East – ‘the cradle’ of Christianity. Special concern is caused by the situation around Syria, Mr. Lavrov stressed. ‘In the difficult situation, the widest recognition has been gained by the pro-active peacemaking efforts of Your Holiness including your recent contacts with Pope Francis of Rome and heads of the Orthodox Churches of Constantinople, Antioch, Alexandria and Jerusalem’, the head of the Russian foreign policy department said addressing His Holiness Kirill.

Referring to other hotbeds of tension in the world, the minister of foreign affairs made a special mention of the situation in Ukraine, saying, ‘Using this opportunity, I would like once again point to the role that Your Holiness has played in solving acute humanitarian problems caused by the calamities which have affected this country so close to us’.

In his further remarks Mr. Lavrov stated that the Russian diplomacy continues to do the most to advocate the rights of Christians and other traditional confessions. ‘We are ready to intensify further the manifold partnership with the Russian Orthodox Church and to maintain close cooperation with other traditional religions in Russia with the aims to promote an honest and harmonious international agenda striving for the future’, he said. 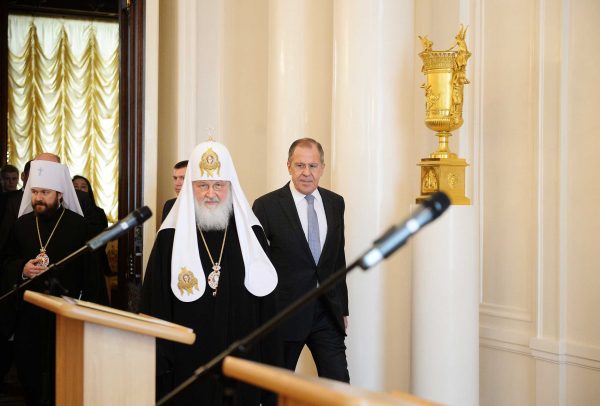 Addressing the gathering, Patriarch Kirill greeted all those present on the occasion of the Resurrection of Christ. He said, ‘Appearing before His apostles upon His Resurrection the Lord greeted them with wishes of peace (Jn. 20:19). The maintenance of peace and good-neighborly relations between nations is one of the most important tasks of state, public and religious institutions, of all people of good will. In these Paschal days the Church again makes an appeal to set aside discords and divisions, to share hearty warmth and care with those who are near and who are far’. Noting that the surrounding world is full of contradictions with society remaining vulnerable in face of numerous challenges and threats, the Patriarch pointed to terrorism as one of the principal problems of today as it uses religious slogans to persecute religious communities, in the first place Christians, and to destroy moral guidelines and the institute of the family.

In this difficult time, dialogue and cooperation between Orthodox Churches reveal to the world the unity of Orthodoxy, their common commitment to the Gospel teaching, His Holiness said. He mentioned major recent events in the sphere of inter-Orthodox relations.

Among the topics of His Holiness’s remarks was the situation that has developed in the Middle East in connection with the recent missile attack on the Syrian territory. The Primate of the Russian Orthodox Church stressed:

‘In the recent days, the whole world has become a witness to a serous aggravation of the international situation around Syria. Being torn up for already several years by a war against terrorist bands, Syria, during the Saturday night, was subjected to an airtillery by three Western states. The threat of a serious global clash between world powers has arisen.

‘Assessing the developments, we, first of all, orient ourselves towards the evidence given by Churches who serve in the affected region. Immediately after the bombing three Syrian Patriarchs – His Beatitude John X, Patriarch of Antioch and All the East, Melkite Patriarch Youssef I Asbi and Syriac Orthodox Patriarch Ignatius Aphrem II, made a statement calling the bombing of their country a brutal and unjust aggression that ‘destroys the chances for a peaceful political solution and leads to escalation and more complications, as well as ‘encourages terrorist organizations and gives them momentum to continue in their terrorism’.

The Russian Orthodox Church cannot be indifferent to the suffering of people in the Middle East, to the extermination of oldest Christian communities who trace their history from the times of the Gospel, to the irresponsible actions that can lead to a world catastrophe.

For this reason, I considered it necessary on the Saturday to come immediately in contact with Pope Francis and with all the Orthodox Patriarchs in the Middle East – Bartholomew of Constantinople, Theodoros of Alexandria, John of Antioch, and Theophilos of Jerusalem. On my instruction on the same night, Metropolitan Hilarion got in touch over telephone with primates of the Syriac Jacobite and Coptic Churches. All those with whom the talks were held are united in concern for the terrible danger hanging over the region and the whole world resulting from a lack of coordination between nuclear powers. To resolve the situation a responsible dialogue is needed between all political and public forces. We have agreed to continue consultations and decided that Christians should do all that depends on them to promote the immediate cessation of violence and war in Syria and the establishment of sustainable peace in the Middle East’.

Most viewed articles
Words from St. Isaac of Syria153
Patriarch Kirill Encourages the Media to Report Proper and Adequate Information about the Church147
Since the Start of the Pandemic Moscow Priests Have Made Over 4,000 Visits to Patients with COVID-19107
“Do Not Weep”101
Archbishop Peter of Chicago and Mid-America in an interview to Poltava Diocese’s press service reveals interesting moments in the life of St John (Maximovich)98
Best Films of the Pokrov Film Festival Have Been Determined88
Christ the Life Giver29
(VIDEO)Celebrating 5 years of Byzanfest International Orthodox Film Festival21
Using Our Time Wisely to Cultivate the Seeds of Faith2
Most popular authors
Pravmir.com team461
Archpriest Stephen Freeman153
Archpriest Peter Olsen101
Fr. Theodore Stylianopoulos29
Priest Luke A. Veronis2