On 28 February 2013, His Holiness Patriarch Kirill of Moscow and All Russia received a delegation of the National Council of Churches in Korea (NCCK) at the Patriarchal and Synodal residence in St Daniel’s Monastery. 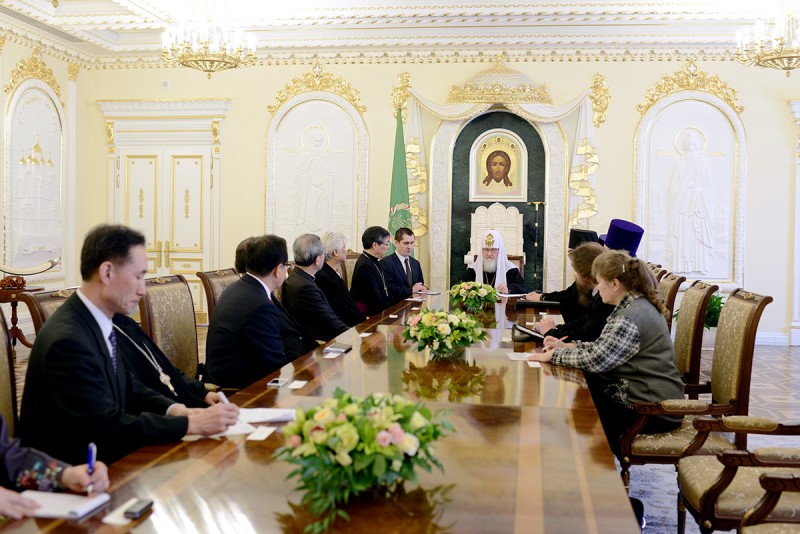 His Holiness Patriarch Kirill greeted the guests, saying in particular, “The Russian Orthodox Church and the Christian Churches in South Korea have been maintaining long-term cooperation. Our Church took an active part in the international movement aimed at the reunification of North and South Korea, so called Tozanso Process, which started in 1984 under the aegis of the World Council of Churches.”

The Primate of the Russian Orthodox Church thanked representatives of the South Korean Churches for the aid these Churches had rendered to the Holy Trinity and St Sergius Laura in the early 1990s in purchasing printing equipment for setting up a publishing and printing complex.

His Holiness emphasized the importance of the 10th General Assembly of the World Council of Churches due to be held this autumn in the town of Busan at the invitation of the Christian Churches in South Korea. Patriarch Kirill believes that this event is supposed to make a considerable contribution to the reunification of the Korean people.

Members of the Korean delegation thanked His Holiness Patriarch Kirill for hospitality and the opportunity to learn about the life of the Russian Orthodox Church. The representatives of the Korean Churches expressed their desire to develop students exchange between educational institutions of the two countries. It would mean, in particular, that professors of the Moscow Patriarchate’s theological schools could be sent to South Korea for delivering lectures on Orthodoxy. The guests told Patriarch Kirill that the deep interest shown in the Russian Orthodox tradition in South Korea is prompted by the fact that the first missionaries had come to Korea from Russia.

Most viewed articles
Metropolitan Hilarion of Eastern America and New York to Be Buried in Jordanville on May 22321
What Do We Celebrate at Mid-Pentecost?135
Family Life and Spiritual Warfare111
God Within the Chaos81
Concelebration of Divine Liturgy by the Serbian Patriarch and Archbishop of Ohrid in Belgrade (VIDEO)80
Patriarch of Serbia to Concelebrate with Archbishop Stephen of Ohrid69
China’s Internet Clampdown Is Step Closer to ‘Cancelling Christianity’68
Registration Opens for June 17 Parish Development Forum Online28
Most popular authors
Pravmir.com team498
Ioannis Foundoulis135
Archpriest Michael Gillis111
Priest Peter Kavanaugh81
Donna Birrell68