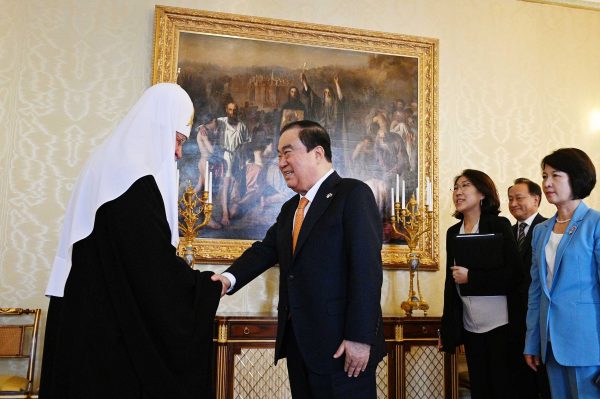 On May 29, 2019, His Holiness Kirill, Patriarch of Moscow and All Russia, met with the Speaker of the National Assembly of the Republic of Korea, Mr. Moon Hee-sang, at the St. Daniel Monastery in Moscow.

The Russian Ministry of Foreign Affairs was represented by Mr. I. Sagitov, deputy director of the First Department for Asia.

From the Korean side, there was also the Ambassador of the Republic of Korea in the Russian Federation, H. E. Lee Sok-bae, and a delegation of Korean parliament members and representatives of several Korean parties, as well as Korean embassy officials.

Patriarch Kirill cordially welcomed the high guest and his delegation, saying in particular, “Russia and Korea are countries with a rich cultural and spiritual tradition. Therefore, an important role in the relations between these countries should belong to inter-cultural dialogue, as well as discussion on religious topics”.

His Holiness shared remembrances of his visits to South and North Korea, “In 1990, I chaired the conference on “Peace, Justice and Integrity of the Creation”, which took place in Seoul under the aegis of the World Council of Churches, and in 2006, I visited the northern part of the Korean Peninsula. I have an experience of communicating with those who live in the north and in the south of the Korean Peninsula. I should say that it gives a clear idea of the tragedy which has led to the division of the Korean people”.

As he noted, the Russian Orthodox Church stood at the origins of and was an active participant in the international movement for the unification of the North and South Korea, in the so-called “Tozanso Process”, which began in 1984 under the aegis of the World Council of Churches.

According to His Holiness’s testimony, today in the churches of the Russian Church – in the church of the Trinity in Pyonyang, which he consecrated in 2006, and in the reviving parishes in South Korea – prayers are lifted up for peace and unification of the Korean Peninsula.

His Holiness also noted that the friendly relations between Russia and the Republic of Korea have actively developed in the last decades, also with the help of the World Council of Churches in Geneva.

The Primate of the Russian Orthodox Church expressed gratitude to representatives of the Church in South Korea for the support they gave in 1992 for purchasing a printing press for the publishing house in the St. Sergius Monastery of the Holy Trinity. “With the help of this equipment we began publishing many religious texts, which in itself was a significant development in the Soviet time. And we are grateful for the participation of South Korean Christians in that program to this day”, he stated.

In his turn, Mr. Moon Hee-sang thanked Patriarch Kirill for the warm welcome and opportunity to become familiar with the life of the Russian Orthodox Church. “For me, it is a great honour to be present here, in the St. Daniel Monastery famous for its rich history among Moscow monasteries”, he said.

“I have a deep respect for you, Your Holiness, because it is through your efforts that the Russian people are united”, he continued, “I know that you really make a great contribution to the prevention of interreligious and inter-confessional conflicts, so that the Russian society and the world community could unite on the basis of religious values. I also thank you for your efforts for the reconciliation of the North and South of the Korean Peninsula and for your prayers, and I ask, please, continue them”.

As the Speaker of the National Assembly of the Republic of Korea noted in his talk with the Primate of the Russian Church, there are 80 million people living in the Korean Peninsula – 50 million in the southern part and 30 million in the northern part of the peninsula. “In spite of the fact that we are a one nation and speak the same language, our countries have been divided for 70 years now. Two years ago, nobody could even dream of our talking about a peace process, for the situation around the Korean Peninsula was on the brink of war”, Mr. Moon Hee-sang said. He also noted that the 23d Olympic Winter Games, which took place in Pyeongchang, South Korea, in 2018, gave an impetus for the process of unification between the North and South of the Korean Peninsula.

“We have reached the present result through common efforts we made to realize our heart’s desire. But credit should also be given to the international community, which also exerted efforts for demilitarization and establishment of a lasting peaceful regime. It is the UN and such countries as the USA, China, Japan. I would like to point to a special role of Russia in this process”, Mr. Moon Hee-sang stressed.

In conclusion of the talk, they exchanged tokens of their meeting.