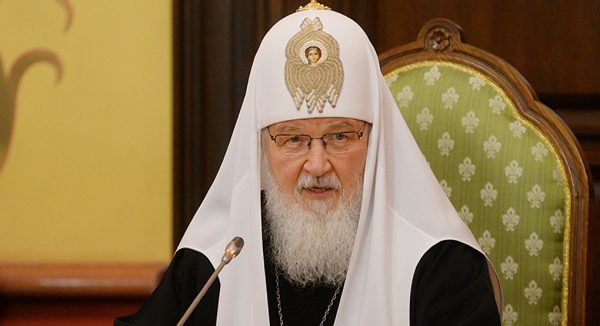 On 21 November 2018, His Holiness Patriarch Kirill of Moscow and All Russia met with members of the Council of Church Leaders of Iraq.

Taking part in the meeting, which was held at the Patriarchal and Synodal residence in St. Daniel’s Monastery, were Archbishop Avak Asadourian of the Iraqi diocese of the Armenian Apostolic Church and General Secretary of the Council of Christian Church Leaders of Iraq; Metropolitan Ghattaz Hazim of Baghdad and Kuwait, Antiochian Orthodox Church; Archbishop Mor Nicodemus Daoud Sharaf of Mosul, Kirkuk and the Kurdistan autonomous region, Syriac Orthodox Church; Bishop Mar Abrs Youkhanna of Erbil, Assyrian Church of the East; Archpriest  Sami Younan Alfred Ibraheem, Antiochian Orthodox Church; and the Rev. Mina Alorshalemy, representative of the Coptic Church in Iraq.

His Holiness Patriarch Kirill greeted the guests and shared with them his reminiscences of his visit to Iraq in 2002. “I visited Iraq, Mosul churches, monasteries and saw the rich spiritual life of your people. Soon after military forces invaded your country and life has changed. Economic sanctions followed, and Iraq underwent many bitter trials.”

The Primate of the Russian Church regrets that Iraq was not the sole victim of foreign aggression. He noted that in the present geopolitical context a state that makes world or regional impact often invades a weaker state that bringing chaos, migration crisis and humanitarian catastrophe. “Iraq is the most dramatic example. When I visited Iraq I was told that over a million and a half Christians lived there. Now they say that the number of Christians has decreased ten times,” His Holiness added and continued to say: “We highly appreciate the fact that despite the current difficult situation our Church develops relations with Christians in the Middle East. Recently, under my instructions, Metropolitan Hilarion of Volokolamsk, head of the Moscow Patriarchate’s Department for External Church Relations, visited Damascus and took part in the high-level interreligious conference. It is very important to develop inter-Christian relations thus supporting Christians in the Middle East countries. Certainly, we attach great importance to the programs of humanitarian aid to your region. It concerns Syria in particular, but we are prepared to be active in Iraq as well.”

The Primate of the Russian Orthodox Church expressed great concern about the destruction of Christian holy places in Iraq. He said: ‘We must do anything possible to restore the Christian holy sites in the Middle East and to bring back Christians to Iraq, Syria, and other places where they have lives and which they had to flee due to war and civil conflicts.”

Participants in the meeting expressed special gratitude for the visit to the Russian Embassy in Baghdad and to H.E. Maxim Maximov, Ambassador Extraordinary and Plenipotentiary of the Russian Federation to the Republic of Iraq and to the Embassy staff.

In conclusion of the meeting His Holiness Patriarch Kirill underscored solidarity of the Russian Orthodox Church with the people of Iraq and said that contacts should be maintained which will allow implementing the concrete projects of help.