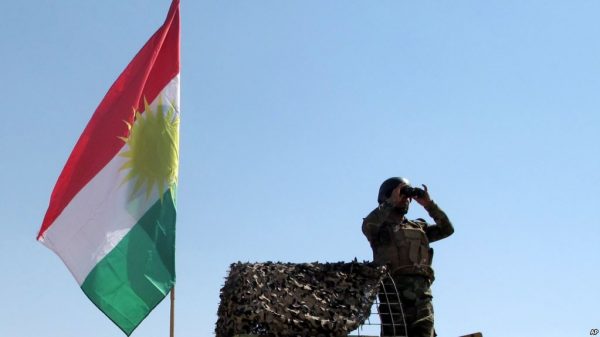 KIRKUK, Iraq (Reuters) — The streets of Kirkuk, which has violently changed hands several times since Iraq’s last election, are crammed with a dizzying patchwork of banners for nearly 300 candidates vying for votes in the multi-ethnic and religious city.

The sheer number of parties and lists make the exact outcome unpredictable in a Saturday vote for the 13 parliamentary seats belonging to Kirkuk, a microcosm of Iraq’s minorities.

But one thing is certain – the city’s Turkmen, Kurds, Assyrian Christians, Sunni Arabs and others will vote along ethnic or religious lines.

After recent political upheaval, they fear that gains by rival groups will upset a fragile coexistence and cause new strife.

“There needs to be balance between minorities in a place like Kirkuk – one group can’t get stronger than the other,” said Ahmed Zeinal, a 25-year-old pharmacist, before casting his vote.

Nonetheless, he wanted his fellow Turkmen to make a strong showing. “We’re hoping to increase our seats. We feel stronger than we did a few months ago,” he said.

Saturday’s election, Iraq’s first since Islamic State was driven out, will shape attempts to heal the country’s deep divisions and could shift the regional balance of power. The three main ethnic and religious groups, the majority Shi’ite Arabs and the minority Sunni Arabs and Kurds, have been at loggerheads for decades.

Kirkuk, a flashpoint oil-rich province in northern Iraq along the fault lines between the Kurdish autonomous region and areas controlled by Iraq’s Shi’ite-dominated central government, has been the focus of some of the country’s worst post-Islamic State violence.

In October, Kurdish forces who had controlled Kirkuk city since driving Islamic State out in 2014 were in turn ejected by the Iraqi army, bringing the city back under Baghdad’s control.

Minority groups who said they suffered under Kurdish rule, such as the Turkmen, have welcomed the return of the central government.

“I prefer a strong Iraqi state, and the control of the army. As a Turkmen in a Kurdish-controlled city I had problems – I was stopped and harassed at checkpoints for not being a Kurdish speaker,” Zeinal said.

Kurdish campaigning has been subdued after the withdrawal of forces belonging to the autonomous Erbil-based Kurdish regional government, although dejected Kurdish voters still vowed to turn out and cast their ballots in a show of strength.

“Arabs have become more powerful now, also Turkmen,” said Nabil Salem, a Kurd. “People are scared of sectarian tension being stirred up. If more Kurds leave and other groups get stronger it could lead to violence.”

Some Kurds fear a weakening of their main parties who have dominated for decades but suffered a major defeat after Prime Minister Haider al-Abadi, the incumbent in the election, crushed their bid for independence.

The Kurdish autonomous region’s ruling party, the Kurdistan Democratic Party (KDP) is boycotting the Kirkuk vote after being booted out in October, leaving rivals including the Iran-allied Patriotic Union of Kurdistan (PUK) to fight over its two seats.

As the city’s two largest groups are locked in contention, its smallest – Christians – suspect their eight candidates, guaranteed one seat under a quota system, are being courted by bigger, rival political forces in Baghdad and Erbil.

They fear being caught in the middle of yet more upheaval.

“There’s no Christian candidate who can afford to run without the support of a much larger side,” 28-year-old Narsin Emmanuel, an unemployed university graduate.

“I hope that whichever Christian candidate wins a seat, he’ll benefit personally from it – he won’t be able to do anything for us because he’ll be beholden to his backers.”

“There’s one Christian candidate running here who’s clearly backed by the Kurdish KDP. Elsewhere – in (nearby) Nineveh province, for example, there’s one who’s on the side of the Popular Mobilization Forces,” an umbrella group of mainly Shi’ite militia, he said at his party’s office in Kirkuk.

“We’re a small and weak minority. I’m afraid that we’ll get stuck between those two sides vying for power.”

Most viewed articles
On the Dormition Fast120
Faith and Moral Freedom66
Patriarch Kirill: “The Memory of the New Martyrs will Help Us to Be Faithful to Christ amid Modern Temptations”61
Dormition Fast: Lesson on Silence51
Patronal Feast Celebrated in St. Anna Convent in Vashkivtsi37
Lord, Save Me!36
Bishop Nicholas of Manhattan visits Holy Cross Monastery in West Virginia30
Condolences of Patriarch Kirill over the death of believers in the fire that broke out in Abu-Seifein Church in Cairo14
Most popular authors
Pravmir.com team262
Archpriest Michael Gillis66
Metropolitan Anthony (Pakanich)51
Fr. Theodore Stylianopoulos36