His Holiness Patriarch Kirill meets with Mr. Xi Jinping, President of the People’s Republic of China

Source: DECR
Natalya Mihailova | 12 May 2015
On 8 May 2015, His Holiness Patriarch Kirill of Moscow and All Russia met with the President of the People’s Republic of China, H.E. Mr. Xi Jinping, in the Moscow Kremlin. 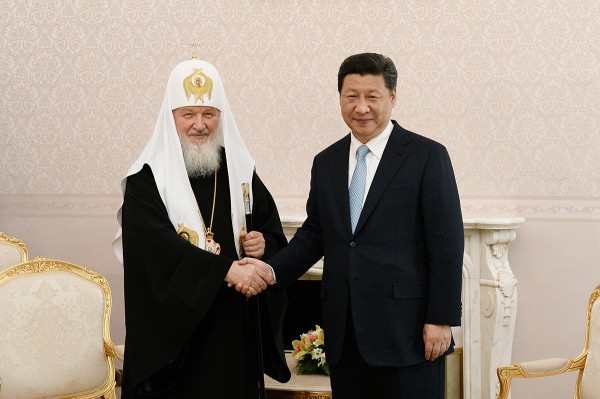 Greeting the Primate of the Russian Orthodox Church, Mr. Xi Jinping said, “Your Holiness, I am very pleased to visit your country and have yet another opportunity to meet with you. I remember very well our meeting which took place two years ago. I believe that your visit to China helped you learn more about our country and exert more efforts to promote Russia-China relations.

“I remember that during our first meeting you told me that the Russian Orthodox Church regarded the upholding of the Russian national tradition and traditional values as her priority task. During the Great Patriotic War the Russian Orthodox Church called upon people to defend their homeland, its sovereignty, territorial integrity and security. We appreciate greatly your Church’s contribution to the common fight against fascism.” 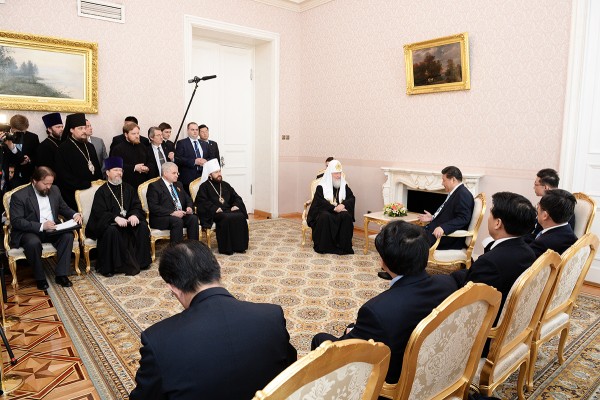 His Holiness Patriarch Kirill said in response: “Your Excellency, I am very glad to meet you. I recall my wonderful visit to China and our first meeting which helped me realize, among other things, how serious is your attitude to the role of culture, traditions and moral factors in shaping people’s life and building up human personality.” His Holiness also noted the importance of the Orthodox community in China for promoting bilateral relations between the two nations.

The participants in the meeting discussed the role of spiritual tradition in the life of society and the importance of developing patriotic feelings in people, and expressed satisfaction over the successful work of the Russian-Chinese working group for contacts and cooperation in religious sphere. Among other issues raised during the meeting were the life of the Orthodox community in China and the restoration of monuments pertaining to the history of Orthodox presence in China.

At the conclusion of the meeting, the President of the People’s Republic of China noted that he felt His Holiness Patriarch Kirill’s cordial attitude to the Chinese people. “The Russian Orthodox Church has brought a special positive energy into the development of Russia-China strategic partnership,” Mr. Xi Jinping said. “I hope that Your Holiness will continue to contribute to the strengthening of friendship and cooperation between our two peoples.”