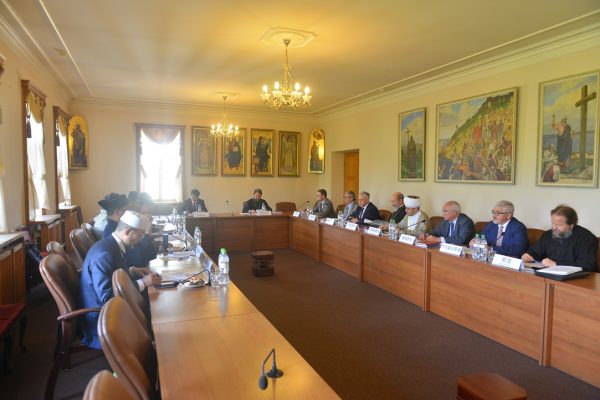 On May 29, 2019, the Russian-Chinese working group for contacts and cooperation in religious sphere held its 7th meeting at the Department for External Church Relations (DECR) of the Moscow Patriarchate.

The participants exchanged opinions on a wide range of issues concerning cooperation and pointed to the importance of interaction of traditional religions in Russia and China.

In November 2009, a delegation of the Russian Presidential Council for Cooperation with Religious Associations, with the participation of representatives of the Department for External Church Relations of the Moscow Patriarchate, visited China at the invitation of the State Directorate for Religious Affairs. Negotiations were held on the development Russian-Chinese cooperation in religious sphere in accordance with the Action Plan for Implementing the Provisions of the Agreement on Good-Neighborliness, Friendship and Cooperation between the Russian Federation and the Chinese People’s Republic for 2009-2012, approved by the heads of the two states.

On the basis of the memorandum on mutual understanding signed during the visit by the Presidential Council for Cooperation with Religious Associations and the CPR State Directorate for Religious Affairs, a Russian-Chinese group was set up for contacts and cooperation in religious sphere. Metropolitan Hilarion of Volokolamsk became the leader of the Russian part of the working group.

The first consultations of the Russian-Chinese Group for Contacts and Cooperation in Religious Sphere took place on June 8, 2011, in Moscow.