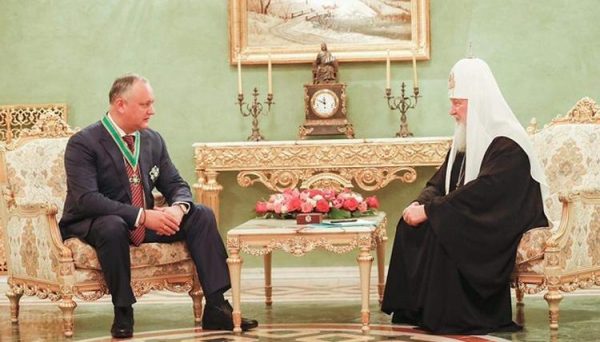 On 31 October 2018, His Holiness Patriarch Kirill of Moscow and All Russia met with Igor Dodon, President of the Republic of Moldova. The meeting took place at the Patriarchal residence in Peredelkino located near Moscow.

His Holiness Patriarch Kirill awarded Igor Dodon with the Order of St. Sergius of Radonezh (2nd class) in consideration of his active support of the initiatives of the Orthodox Church of Moldova and thanked him for his work done for the benefit of the Church, saying “I am especially happy that the Orthodox Church of Moldova is a spiritually stabilizing factor in society.”

“The role of the Church as a factor that stabilizes the life of people, smoothes away the differences, and maintains the unity of society is her very important peacemaking mission,” His Holiness underscored and added: “You are well aware of the role played by the Church and support her in your capacity as the state leader, and I am grateful to you.”

President Dodon thanked the Primate of the Russian Orthodox Church and noted common spiritual values of the people of Russia and Moldova who are believers of one Church. The Orthodox Church of Moldova is a part of the Moscow Patriarchate. He added that 98% of the residents of Moldova are Orthodox Christians and told His Holiness about cooperation with Metropolitan Vladimir of Kishinev and All Moldova, their common attending of public events and his own visits to divine services celebrated by the Metropolitan. “Common work gives us even more strength. Last September we sponsored the World Congress of Families in Kishinev, taking part in which were representatives of over forty countries.”

His Holiness Patriarch Kirill noted the importance of common efforts aimed at the people’s growth in prosperity and the development of public life. “We will pray and work together for the improvement of material and spiritual well-being of people in Moldova, for peace and like-mindedness. This work should be done by the state and the Church. The purpose of the leaders, especially if they belong to the Orthodox Church, should be care for people’s quality of life, both material and spiritual,” the Primate of the Russian Church said in conclusion.